The secrets of Corredera Square in Cordoba | Oway Tours

10 Illustrious personalities buried in the Mosque-Cathedral of Cordoba

The secrets of the Corredera Square in Cordoba 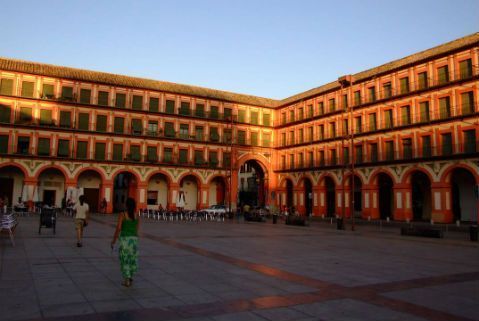 Plaza de la Corredera in Cordoba: a reunion with history Austere, Castilian, Baroque and home of bullfighting or the Inquisition. These are just some of the many faces of one of the most important squares not only in Cordoba, but also in Spain. In addition to its architectural importance, it has a prominent place in the development of history.

A few brushstrokes of history

Rectangular in shape and arcaded with arches in its lower part, this square is one of a kind in Andalusia, as it follows the stylistic line of the Castilian cities. With respect to its origin, it is believed that it was built on the ancient Roman circus and although today it is part of the nucleus, it was once outside the walls and was used as a place of commercial exchange during the Arab period. It was not until the 16th century that the square was designed as we know it today, in order to regularize the urban planning of the area.

Different uses of the Corredera Square

It served as a town hall and jail until the 19th century, when it became a hat factory. Today it is the Municipal Civic Center.

Its aesthetics contrast with the sobriety of the square and are an example of Cordovan architecture of the sixteenth century.

Nearby Places of Interest

This square is one of the mandatory stops on your visit to Cordoba and there are many ways to enjoy it, either through a Free Tour of Cordoba to know the secrets that do not appear in the guidebooks, or the Cordovan way: having a good beer in the warmth of the sun on a terrace, but why not? Both options are not incompatible. Because Cordoba offers you everything you need, so that you only have to worry about enjoying yourself. Explore the city of the three cultures, the soul of Andalusia.