6 Traditions, Festivities and Customs of Seville 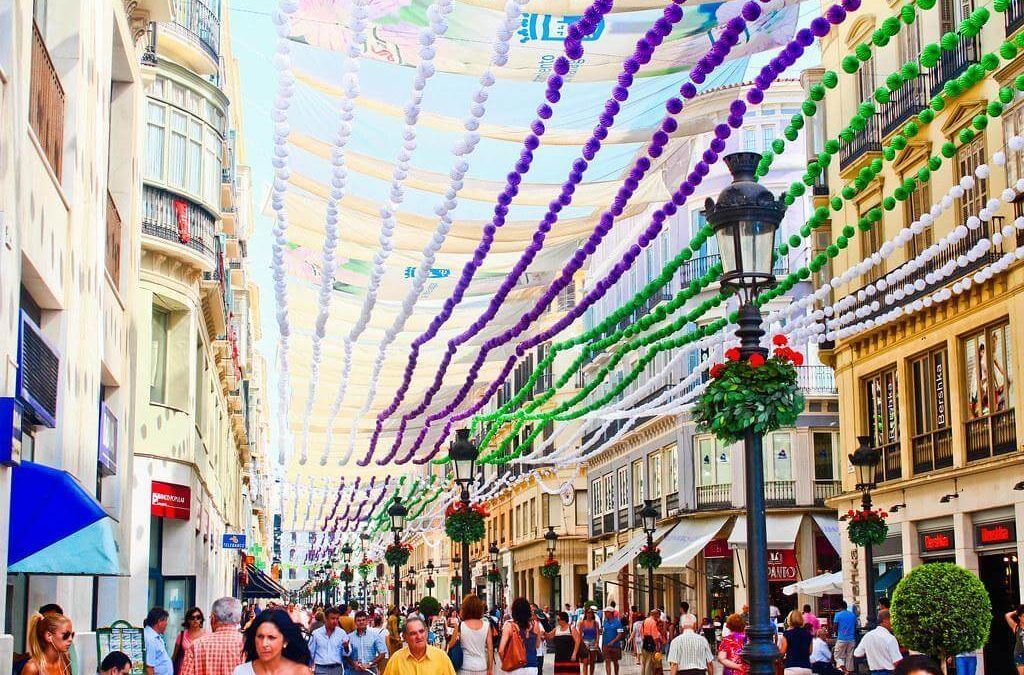 Málaga is a cosmopolitan city, with history, beach and inhabitants who live their holidays with great joy. If you go to Málaga during any of its festivities, you will fall in love with the enthusiasm in the streets and the amount of activities that are organized in the Capital of the Costa del Sol. On this post, we tell you about the main festivities and traditions that take place in the city of Málaga. Keep reading!

Malaga’s joy is contagious, especially during the holidays. Malaga’s inhabitants love to enjoy their parties, their flow and their people.

Every Feria in Andalusia is different and pays tribute to one aspect of the history or culture of its city, and of course, the Feria of Málaga would be no less! This feria is held in commemoration of the incorporation of the city into the Crown of Castile by the Catholic Monarchs, who entered the city at the end of August 19th 1487. In this way, since the 19th century, the Malaga August Fair has been shining in all its splendour and receiving visitors from all over Andalusia, Spain and the world! These celebrations have an open and cosmopolitan sense that attracts international tourism.

The Feria of Málaga is the perfect summer festivity. It opens with the lighting of the “alumbrao” (the lights on the cover) and a fireworks display. During this week, a pilgrimage with carriages takes place and the people from Malaga accompany the standard-bearer of the Feria to the Sanctuary of La Victoria. In the centre, music, tapas and wine make up the most festive atmosphere. In the Real de la Feria, the “casetas” (the small bars with a house shape that sell drinks and foods) are open to everyone and you can dance and enjoy live performances.

Although the best known Carnival in Andalusia is the Carnival of Cadiz, the Carnival of Malaga will not disappoint you. Carnival is celebrated in the city with joy and enthusiasm and the streets are filled with colour and costumes. Groups from all over Andalusia and even from other parts of Spain, come to meet at the Cervantes Theatre and compete with their best weapon: singing. They compete for the best songs, murgas, comparsas, quartets and choirs in the Official Competition of Singing Groups (coacMLG). You can’t miss it!

In addition, each district of Malaga organizes a popular tasting and cooks their most typical dishes: rice, cabbage, casseroles, stews … While singing carnival songs. These festivities conclude with the burial of the anchovy on the beach of the Malagueta. Every year, a giant anchovy is made and taken in procession to the beach where it is finally burned. This is how the people of Málaga say goodbye to their beloved carnival with the intention of returning even more eagerly to the next one.

Málaga is a multicultural city, with traditions that date back to ancient times, but which its inhabitants still celebrate with devotion. Here we bring you the most important ones!

Semana Santa (Holy Week) is a great event attended by Malaga’s citizens, visitors and tourists from all over the world. It has been declared International Tourist Interest because it is an exhibition of baroque art, colour and majesty. During this week, the streets of the city become a spectacle in which thousands of Nazarenes and penitents participate. The music of the bands, the spontaneous saetas and the aroma of incense surround the processions and create an atmosphere of feeling and faith that will move something inside of you.

Fiesta of the Virgen del Carmen

The Night of San Juan takes place on June 23rd on the beaches of the province of Málaga. Thousands of people come to the beaches at dawn, where they light bonfires and burn the typical rag dolls (known as “Júas”) to avoid bad luck. The bravest ones jump over the bonfires. The people of Málaga and visitors celebrate this day on the beach until the early hours of the next day.

The inhabitants of Málaga have some very curious customs that set them apart from the rest of Andalusia, here are the most typical!

The biznaga, the symbol of Malaga

The Málaga biznaga is a bunch of jasmine flowers and a nerdo stem (a kind of thistle that is harvested before summer). The origin of the word “biznaga” comes from the Arabic: “gift of God”. The biznaga is made by inserting the jasmine flowers in the form of a ball into this stem when they are still closed, so that when night falls they open and give off their characteristic smell. There are many types of jasmines used to make biznagas, but the most common is Royal Jasmine, which is white and sweet-smelling. It is known as “biznaguero” the peddler of biznagas, who dresses in a popular costume and usually carries the biznagas in a penca (prickly pear leaf). During the summer, especially at the Feria de Málaga and the Spanish Film Festival, the biznagueros are placed in the streets of downtown Málaga to sell the biznagas made by themselves. Calle Larios becomes a real market of biznagas with a delicious aroma.

How to order a coffee in Málaga

The people of Málaga have a curious habit of asking for coffee that disconcerts visitors. There are up to 8 ways of asking for it, depending on the amount of milk and coffee they bring. Some names are easy to understand but others will shock you. You can ask for a long coffee, half a coffee, short coffee, shade and cloud, here’s a picture of it so you can order a coffee like a real Malagueño!

The Mediterranean life of Malaga is appreciated above all in its beaches and its promenades. The Pedregalejo district is known for attracting locals and visitors with its gastronomic offerings and beautiful beaches. From May onwards, locals and tourists gather in this neighbourhood to take the first baths of the season and eat pescaíto (small fish) in the chiringuitos along the promenade. The most typical dish is espeto de sardinas, since spring, the air in the Paseo Marítimo smells of espeto and the sun invites you to enjoy this delicious fish.