Summer in Cordoba | Top activities to spend an unforgettable holidays

The Royal Chapel of Granada, artistic heritage of the Catholic Monarchs 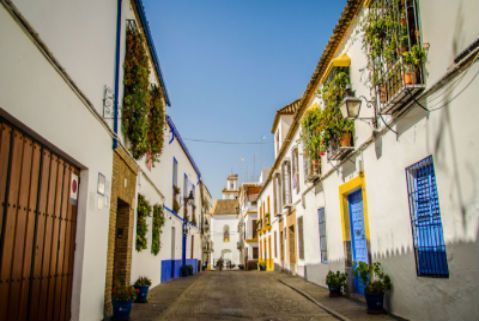 The Alcázar Viejo quarter, or also known as San Basilio, is one of the obligatory stops if you visit Córdoba, the city of the three cultures. A quiet neighborhood full of history, where the patios bloom in their maximum splendor during the month of May. The cathedral of the Andalusian thoroughbred horse. The festival of the patios in May. The sobriety of the fortress of the Alcazar de los Reyes Cristianos...These are just some of the things you will find in your walk through one of the most emblematic neighborhoods of Cordoba.

One of the arteries in the old quarter of Cordoba

The historical center of Cordoba is crowned as one of the oldest in Europe thanks to its millenary condition. Thus, San Basilio is one of its arteries and the westernmost part, located in the central District, so it is between the magnificent neighborhood of the Cathedral and Corregidor Avenue. Planned in 1399, today is one of the busiest areas in the city, not only by tourists who come curious to contemplate the ancient monuments, but also by locals who enjoy the purest Cordovan lifestyle, either enjoying the sun and some good tapas on a terrace, or improvising with the guitar in a cordovan courtyard under the warmth of the aromas of flowers and the rumor of the fountains.

Its history goes back to the first years after the Christian reconquest of the city in 1236. Later, well into the 15th century, the area was used to repopulate the city with soldiers and their families, which would provide extra protection. The most curious thing is how the enlargement was carried out: following the patterns of contemporary urbanism based on the urban designs and advances inherited from the Muslims. This new and tidy layout would retain Arab reminiscences thanks to the central position of the courtyard in the dwellings, a construction that continues to dominate the panorama today. Thus, its history would take a turn with the occupation of the converted Jews in 1479. Throughout its defensive history, the neighborhood has seen the birth of such emblematic monuments as the Alcazar de los Reyes Cristianos, or the Torre de Belén. Worship also has a place in this neighborhood thanks to the Church of Our Lady of Peace.
Alcazar of Cordoba Guided Tour 18€ Book

Must-do in the route by the Old Alcazar

The magnificence of the Royal Stables

The cradle of the purebred Spanish horse presents a monumental building and shows where the equine world is mixed with the flamenco.

The history of the Alcázar de los Reyes Cristianos

One of the most important places in Cordoba, and the most Christian and defensive representation. A place that, among other events, witnessed how Christopher Columbus requested funds from the Catholic Monarchs for his maritime adventure. Today you can visit both, the Alcazar's chambers and its impressive gardens, and enjoy a light show.

The heritage of the courtyards

What would Cordoba be without its courtyards? Something essential for its beauty, history and function. Patios have their own festival in May, when the locals open their doors to share this Arab heritage with visitors.

Part of the wall of Cordoba, its edges and pure lines are heritage of the most defensive side of the city.

Founded in 1590 by the monks of St. Basil, it houses a capital with the image of St. Raphael, one of the most venerated saints in the city.

At Oway we are passionate about Cordoba, and we want you to get to know its magic, passion and history with us.

Will you dare to discover Cordoba?