▷Where to see stars in Seville: Astrotourism in Seville 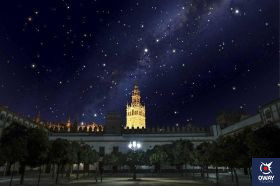 Andalusia is one of the most complete communities in terms of tourist offers for any time of the year, including day or night, and it is on the latter option where we will focus in today’s blog, as we are going to talk about and explain the best destinations to enjoy astro-tourism in the capital of the Andalusian community, that is, in Seville.

On the ninth and tenth of August, two of the main events in these days of astronomical observation will be held in this province, the first of which is the “Marcha BTT Nocturna” and the second “Ruta El Sanguino y la Luna”, both a combination of hiking and astronomy that takes place in La Puebla de los Infantes, a Seville municipality. These days are organised by the town council after having received in 2014 the certificate of “Startlight Reserve and Tourist Destination”, a distinction that endorses the quality of the night sky thanks to its darkness, so they try to promote their night sky as a way to live intensely and in a less conventional way a starry night.

This first of the days to enjoy the night sky is focused for those passionate about living new and different experiences with their mountain bike, this day is organized by the City Council of La Puebla de los Infantes and sponsored by the Diputación Sevillana. 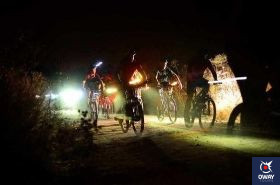 The day starts on Friday 9th August at half past nine in the evening, that is, when the sun sets. It is one of the most popular days among riders because it is not focused as something competitive, and registrations are completely free via email or via Whatsapp. The route starts beforehand with a concentration at the Recinto Ferial de la Puebla, from where the twenty-five kilometre route through the Sierra del Lobo will start while being guided and controlled by civil protection and local police to control the departure and arrival of the peloton.

The Sanguino and the Moon Route

The second option is a little more relaxed than the previous one as we get off the bike to use our own legs as vehicles for this astronomical journey which we will talk about next.

The town council is once again organising this event on the tenth of August in collaboration with Astromares, under the sponsorship of the Diputación, which is a night-time walking route with telescopic observation and interpretation of the skies. The route will start at around half past eight in the evening, welcoming the participants who will meet at El Sanguino to the south-west of the town centre. 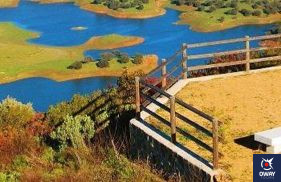 From this point the interpreted ascent to the “Mirador de las Palomas” will begin, which will last about seven kilometres and is ideal for beginners in this type of event. During the guide’s tour you will discover the geological and social history of the municipality, as well as its importance throughout history.

When the route is finished at around half past nine, the town hall will offer a small catering to the participants to regain strength before finishing the whole day with a stargazing workshop. This activity, on the other hand, is not free but only costs eight euros per person which can be paid at the beginning or end of the event, while registration is by email and totally free of charge.

This trail is also called “Circular de los Callejones” due to the alley-shaped constructions delimited by low dry-stone walls. The route starts when the night is falling from “El Castillo de las Guardas”, exactly from the “Plaza de la Fuente” and at the end of here we will find a sign indicating the beginning of the “Circular de las Minas del Castillo” but this will not be our starting point, but we will have to continue on the asphalt until a dirt road that will be on our right with a yellow and white sign.

The path will follow a path with a stone floor that will take us to the first of those alleys with walls on the sides towards the “Barranco del Cagancho”, where we will find another low wall indicating a turn to the left. 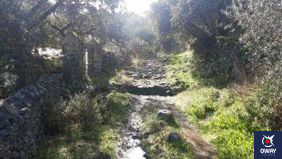 After this first stretch the path starts to rise at the “Puerto del Chorrillo” to the “Barranco del Corchito” from where it follows the path southwards until it reaches a crossroads marked GR-41, where the direction changes to the northwest and starts to rise. When we reach the cortijo we will find a path close to the Castillo de las Guardas. Finally, when the path comes to an end, we will cross a series of gates until we reach the “Calle Escuela” (School Street) close to the houses of the village.

This trail is generally of low to medium difficulty and is about seven kilometres long.

At OWAY TOURS you can also enjoy the following alternatives: