The best terraces in Granada.

Route of the Mills of the Guadalquivir river in Cordoba 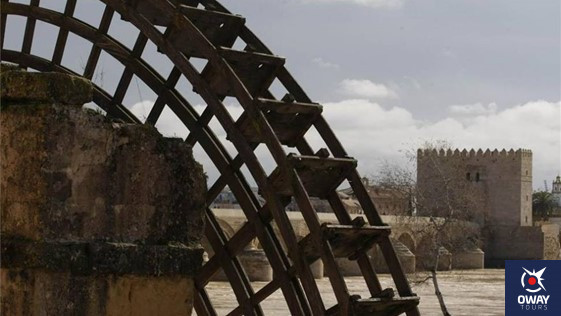 The beauty of the city of Cordoba not only resides in its spectacular monuments (Mosque-Cathedral, Alcazar of the Christian Monarchs, Medina Azahara, Synagogue …) but in addition to them, it has a diversity of unknown corners full of charm and little crowded routes that make even more complete the historical-artistic heritage of the town. Among them, we find the Route of the Mills of the Guadalquivir, a charming route where you will enjoy the best views of the passage of this river through Córdoba, you will enjoy a pleasant walk along the Rivera and you will discover the capital in a different way. Do you want to know more about this route? Well, keep reading and you can discover all the information about it.

First of all, there will be a stop at the most famous mill, located in the Protected Natural Environment that gives it its name  “Sotos de la Albolafia. Is very close to the  Roman Bridge (so it is easily located from this element) and on the right bank of the Guadalquivir. It was ordered to be built by Abd al-Rahman II to raise the water of the river to the palace of the emirs through a  strategically crafted aqueduct. The mill has in its structure with a restored ferris wheel that was ordered to be dismantled (in 1492) during the reign of Isabella the Catholic due to the incessant noise that it produced during its movement, since it is located near the Alcazar of the Christian Kings, one of the residences of the monarch. 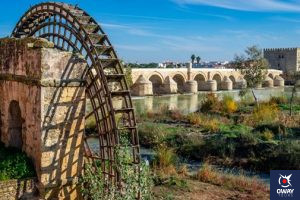 In the sixteenth century, the nuns of Jesus and Mary, who were its owners, took care of its restoration, being the works directed by Juan de Ochoa. From this century, the Ferris wheel was reflected, along with the Mosque-Cathedral  and the Roman Bridge, on the seal of the City Council. At the end of the twentieth century and after several renovations in previous centuries,  a remodeling of the area and its  subsequent  cleaning was carried out again.

If we continue with the route, we find these two mills located in the middle of the riverbed, currently they are somewhat hidden by the growing vegetation but it is still easy to appreciate them with the naked eye. Its location was not improvised, since that particular place was chosen for construction to facilitate the collection of water. Seen from the Roman Bridge, the mill of Pápalo is the one located on the right. It is the one that is most hidden by the vegetation and therefore has become a place of passage and nesting of birds (at present, the Natural Monument of the “Sotos de la Albolafia” has more than 120 species of this animal). On the other side we find the mill of Enmedio, located on the left, and that like the previous one, the growth of the plant elements has been covering its structure over time. 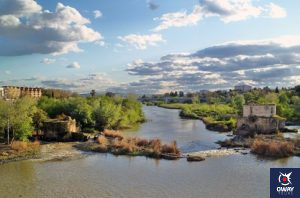 Next to the left bank of the Roman Bridge, is located the mill of San Antonio. Although its original function was to collect water, in recent times it was used to grind flour to feed army troops in the mid-twentieth century. Its structure has several floors (although some studies indicate that in its beginnings it only had one), using the lower one for the construction of wooden boats to cross the Guadalquivir River. After several decades of neglect, at the beginning of the twenty-first century (2007) a plan was approved to carry out a restoration init, which would conclude only a year later 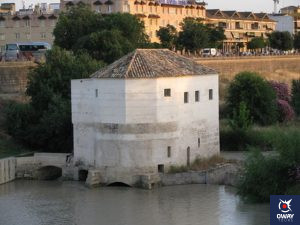 It is believed that the origin of the mill  probably dates from medieval times and owes its name to an image of San Antonio that was once located in a niche and located on the façade. It is currently used as a showroom and it is possible to visit, as it has a permanent visiting hours.

They are located on the left bank of the river, downstream of the San Rafael Bridge. Next to the mill of San Rafael,  we are located next to the image of the mill of San Lorenzo, this being the closest to the shore. Its central core is of square plan covered with a vault with flat surface, in addition it also has a brick vault to allow the passage of water. Its structure has a three-arch access bridge, with two semi-attached bays parallel to the direction of the current to the west. The mill of San Rafael with a similar characteristics to the previous one. According to the documents, in the nineteenth century this construction housed inside a paper factory. The paper mills are barely witnessed in Cordoba, and although it is assumed that they must have existed during the Andalusian period, their use is unknown from the thirteenth century, being known only about the operation of the mill of San Rafael. 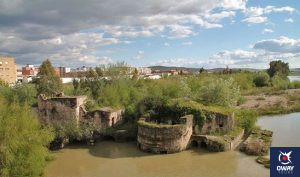 To conclude the route, we find this interesting mill that is located on the right bank of the Guadalquivir River and is currently part of the Botanical Garden of Cordoba, being used as a museum of Paleobotany. The mill of Joy dates from the fifteenth to the sixteenth centuries, and is the best preserved to date due to the various reforms that has been underwent over the centuries. It is the largest mill of all, with three floors (the lower one of stone and the upper two of brick) 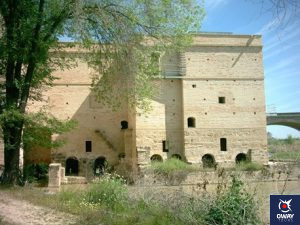 The mill has origin in the Andalusian era, being acquired by the Diocese of Córdoba from 1272, after the conquest of the city by the Christians. In 1780 the land was bought from the Diocese of Cordoba and the mill of Joy was built on its remains. During the second half of the nineteenth century two new plants were added, being its image very similar to the current one. From 1928 it began to operate as a power plant, first in the hands of the Gas Company and Electricity of Cordoba, while in 1940 it passed to the electric company Mengemor  and finally, in 1964, to the Sevillian Electricity Company. On July 11, 2002 the Management of Urbanism of the  City of Córdoba and the Municipal Public Foundation of the Botanical Garden.

And if you are looking for a complete experience in Cordoba, know the best guided tours of the city with Oway Tours: