“Granada is defenceless before the people; because before the flattery nothing and nobody has any way to defend itself”. This is how the poet Federico García Lorca describes what is considered to be one of the most beautiful cities in Andalusia.

This place stands out for its authentic cultural diversity and religiosity, which throughout its history has been a destination city where people who moved to the territory as a result of the de-ruralisation of the 20th century came together.

The cultural offer it offers through its neighbourhoods, museums, monuments and rural areas, and the fact that it is located next to Sierra Nevada, one of the favourite destinations for winter sports activities, as well as being one of the main university destination cities in Spain, have made it an outstanding destination worthy of each of the visits it receives.

On the other hand, another of the city’s strong points is its gastronomic culture. Its cuisine, including the famous tapas of considerable size that are served here, are more than enough of an incentive for any trip.

Many are the landmarks that find rest in this capital. If we have to highlight some of them, what would be some of the obligatory stops for any traveller who enters its streets? Here are 8 plans or activities that are both unique and essential as well as alternative or perhaps more unknown.

The Alhambra is the most famous monumental complex in the city of Granada. Recognised worldwide as a World Heritage Site by UNESCO, this complex is built on the site of a gradual city of Andalusian origin. It is made up of several entrances, the Alcazaba, the Medina, the Convent of San Francisco, the Palace of Charles V, the Church of Santa María de la Encarnación and the Generalife. Within each of the aforementioned areas, the Puerta del Arrabal, the Homage Tower and the Nasrid Palaces, the Comares and the Leones, stand out.

It was designed to house both the life of the emir and the court of the Nasrid kingdom. Over time, the complex ended up becoming the residence of the Castilian royalty and their relatives.

In addition, you can walk through its rooms to enjoy the visual elegance of more than 10,000 poems or texts inscribed in the building itself, all of them originating from classical Arabic.

The impact of the ensemble on local popular culture can also be appreciated, with the building playing a leading role in the musical, literary and cinematographic fields on rare occasions.

Visitors can enjoy both the immensity of Andalusian art and the setting itself, which blends in completely with the landscape of the area, giving the place a sense of unity and harmony. Spending the night in a cave house

This type of accommodation breaks with convention and is gaining interest among travellers. They are located in the regions of Guadix and El Marquesado, and Baza-Huéscar. The brand name that safeguards this new type of tourist attraction is called “Andalusian Cave Hotels”, which has more than 50 tourist accommodations spread throughout the aforementioned places.

The cave-houses originated as a home for more than 3,000 family units in Granada. Dug out of the ground, these types of buildings are a clear example of the link that people shared with the environment that surrounded them.

This whole movement revolves around the conservation of the environment, the protection of traditional architecture and the prioritisation of the quality of the service offered.

Each of the houses is unique from the previous one, but all of them share a common factor, their formation in the earth means that the temperature inside is stable, not being too cold in the winter season and not too hot in the summer.

The visitor will therefore have the opportunity to enter into years of history of the place through discovery and relaxation. 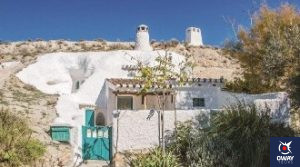 Pilgrimage to the Abbey of Sacromonte

Dating back to the 17th century and recognised as an Asset of Cultural Interest under the national historic heritage regime, this abbey is situated to the northeast of Granada. It has become a place of pilgrimage to which the faithful flock.

It houses the canons‘ living quarters, as well as a parish church, where masses are currently celebrated, and a museum of an ecclesiastical nature.

The main building was initially built in 1600 by the Jesuit Pedro Sánchez, commissioned by Archbishop Pedro Vaca de Castro y Quiñones, whose death meant that construction was halted due to lack of funding. Construction was finally completed 10 years later, in 1910. The original plans can still be found today in the local library.

On the other hand, the archbishop was one of the pioneers in founding a private college for law, theology and philosophy, becoming one of the first in Europe.

The church, still conceived as a single nave, was enlarged with two more aisles, completing the building in the form of a Latin cross. This landmark consists mainly of the main chapel, the transept and a space for the choir.

In addition, inside the cloister, perhaps the most outstanding feature of the complex, there is a fountain that dominates the space, conveying the essence of the place to the visitor.

Discover the immensity of the city with our Free Tours in Granada. 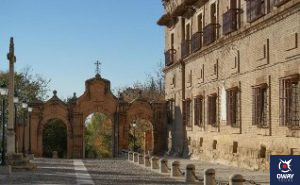 Granada is known for many of its monuments, but what about the gastronomy and the culture rooted in it? The city is famous for the large tapas served with the drinks on offer.

The most popular drinks are the Alhambra beer or perhaps a wine with designation of origin. As for the tapas, it is common for the staff of the establishment themselves to choose the traditional tapa to be served, as a gesture of courtesy to them.

The most popular places to taste these typical dishes are Plaza Nueva, Campo del Príncipe and Plaza del Realejo.

On the other hand, the tea shops are also famous in the city of Granada. Visitors will have the opportunity to try this type of drink that will take them back in time to the history of Andalusia.

In addition to being able to experience these exotic drinks, these places are usually full of shops where you can find products belonging to Arab cuisine, traditional craft establishments or even the possibility of acquiring natural elements frequented in this culture. 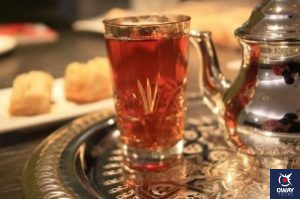 Visiting the Cathedral and the Royal Chapel

Under the official name of “the Holy and Apostolic Church Metropolitan Cathedral Basilica of the Incarnation of Granada”, you will find an Asset of Cultural Interest in terms of Andalusian Historical Heritage. Better known as the Cathedral of Granada, this building corresponds to a temple of Catholic origin and the seat of the archdiocese.

It has no less than 15 chapels and a sacristy, the most famous of which is the Royal Chapel. In the latter lie the mortal remains belonging to the Catholic Monarchs.

This building stands on the site of what was once the most prominent mosque in the area, becoming one of the key temples in the field of Spanish Renaissance architecture. The work was initially commissioned to Enrique Egas in 1506, the year in which the construction was conceived in the Gothic style. Later, in 1529, Diego de Siloé took over the project and introduced the Renaissance style. In 1664, Alonso Cano entered the scene, leading to the incorporation of the Baroque style. Finally, in 1706, Francisco Hurtado Izquierdo and José Bada built the tabernacle.

The Granada Cathedral has experienced throughout its construction a confluence of styles and cultures. This way travellers have the opportunity to fully immerse themselves in the history of the city.

Enter the Cathedral and the Royal Chapel through our Guided Tours. 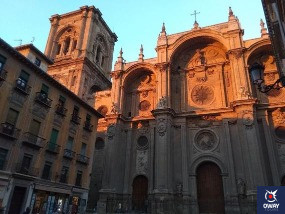 Relaxing in an Arabian hammam

The word hammam refers to what is commonly known as a “public bath”. The aim of this type of Islamic bath is to cleanse the body and create a relaxing atmosphere to complete the experience. In addition, they were also used as a place for social gatherings or as a sign of the architectural prestige of the period.

Influenced by the Roman baths, their distribution extends to several rooms that follow the correct order of the “cleansing” to which the visitor is subjected, going from the coldest room to the hottest. Each of the spaces is dedicated to a specific task.

Most of these buildings date from the time of the Umayyad Caliphate between the 7th and 8th centuries, but even today their importance is maintained over time, with many of them being visited by travellers.

The most recommended Arab baths in Granada are those of Al Andalus, Al-Haram, Palacio de Comares, Spa Granada Palace or Elvira. In each of these establishments, clients can enjoy different spaces with water as the main feature, as well as having the possibility of receiving massages with the incorporation of different relaxation elements or tasting typical dishes or drinks from the Muslim gastronomic culture. 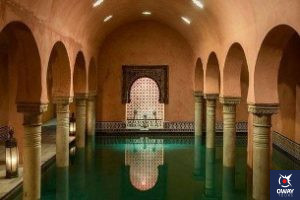 Strolling through the Albaicin neighbourhood

This is the oldest quarter of the city. Also known as “Albayzin”, it is bordered by Sacromonte, Calle Elvira and the river Darro.

The Muslim origin permeates the streets of this area, impregnating every corner with the influence of their culture. Even before the conception of the Alhambra, in the 11th century a royal palace belonging to the Zirid dynasty, citadels, cisterns and constructions of great Islamic value such as the Mayor Mosque or public baths such as those of the Bañuelo were built here. This may be the period of greatest splendour for the area, as its streets, full of luxury houses, were inhabited by more than 40,000 people, in addition to the presence of some thirty mosques.

After the defeat of the Catholic Monarchs, this neighbourhood became home to the last remaining Muslims who still lived their daily lives in Granada. Even so, many of the Islamic buildings were lost due to the destruction or transformation of most of them.

Among the highlights of the Albaicín, travellers can stroll around and admire walls, viewpoints, cisterns, houses, churches, convents, squares and carmenes. Visitors have the opportunity to walk through these streets full of history, which have also been declared a World Heritage Site by UNESCO.

Visit the Albaicin and Sacromonte on one of our Guided Tours of Granada’s most famous neighbourhoods. 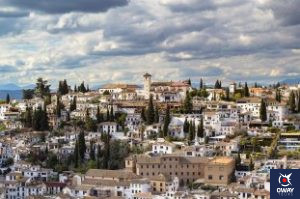 The best terraces in Granada.

What to see and do in Almuñecar, Salobreña and Motril?