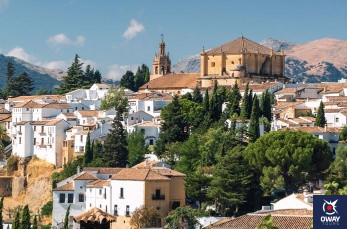 To be in Ronda, in this Moorish city, poetic and unapproachable, is the glory of a lifetime” – Lady Terison (1850). So reads one of the phrases depicted on the mural dedicated to the romantic travellers who came to Ronda in search of inspiration.

It is the second most populated municipality in Malaga. Its territory extends along a plateau, the depression of Ronda.

Furthermore, its origins date back to the settlements of the ancient Iberians, giving rise to the Roman Arunda. The Visigoths then occupied the area until the conquest by the Muslims. Latter had a great influence on the place through the advances they introduced, advances that today are considered a historical heritage to be visited.

This city has many landmarks that will make the tourist’s experience a journey through time. Among all of them, the following stand out:

The New Bridge is the most visited point in the city. It is a stone masonry construction from the 18th century, between 1751 and 1793. Serves as a crossing point over the Tajo of Ronda gorge, linking the old and new parts of the city. Has a height of 98 metres over the River Guadalevín. Until 1839 it was considered the highest bridge in the world.

Its name is due to the fact that it occupies the place of an old bridge formed by an arch. Not only did it collapse 6 years after its construction, but it also took with it the lives of 50 people. In the aftermath of this event, the New Bridge was built on the basis of several arches.

Bridge is endowed with balconies protected by curved grilles that allow the person to look out over the deepest part of the Tajo of Ronda. The panoramic view it affords from various points in the area makes this bridge an architecture that has been immortalised in countless photographs. In addition, inside the bridge you can visit the Interpretation Centre, which used to be a prison, for only 2.50 € per person.

It has also been the setting for the Netflix series ¨Warrior Nun¨. 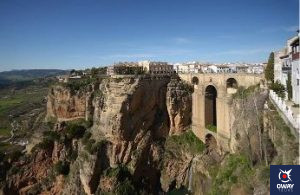 The Old Bridge has an arch and is less high than the Tagus Bridge, 31 metres. It used to be the main entrance to the ¨Market District¨, until the New Bridge replaced it. Its origin is not clear to the experts who study it. It could be of Roman construction, restored by the Arabs, or it could be a purely Arab architecture. 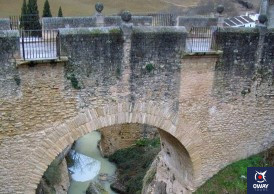 Alameda of the Tajo, ¨Coño¨ Balcony and Promenade of the English

Formerly known as the ¨Alameda of San Carlos¨, the Alameda of the Tajo is a 19th century park and botanical garden renowned for its views of the Tajo gorge. It is made up of 5 streets that lead to a series of balconies from which to observe the Ronda mountain range, as well as having several statues that complete the area. It rests next to the town’s bullring.

The ¨Coño¨ Balcony owes its name to the expression ¨coño¨ exclaimed by those who lean out over the fence. It is one of the most emblematic balconies of the Alameda. 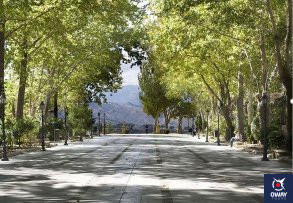 From the Alameda we access the Promenade of the English, bordering the 100 metre high cliff. Its name comes from the 1906 Reina Victoria Hotel, where English engineers who were building the Bobadilla-Algeciras railway line stayed. These workers used to walk along this promenade dressed in their elegant costumes, which gave rise to its well-known name. 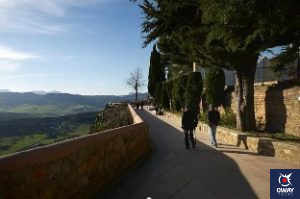 House of the Moorish King and the Mine

The House of the Moorish King is made up of 3 key spaces: the Water Mine, the Neo-Mudejar House and the garden. It is currently in ruins, so it is only possible to visit the surrounding area. It is a monument declared an ¨Bien de Interés Cultural¨ or BIC, which was a key point in the time of the Reconquest, defending the city of Ronda.

Its gardens are submerged in fountains, ponds and small channels. From this location it is once again possible to enjoy views of both the Tajo and the mountains. 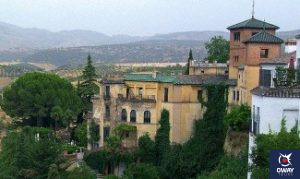 There is also a 14th century Moorish mine excavated in the rock. In its time it served as a passage for the collection of water for the military. This place, impregnated by humidity, has around 200 steps that wind down some 60 metres towards the river Guadalevín. It is said to be an enclave whose caves contain everything from a mirhab to natural stalagmites. 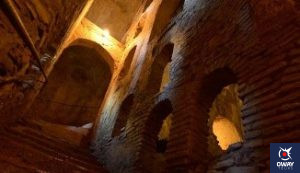 Of Nasrid origin, these baths are among the best preserved in Spain. They are located in the heart of the Jewish quarter of Ronda. It was built next to the Creek of the Culebras for easy access to the water, which was transported by means of a waterwheel system. Due to the flooding of the main river, the Guadalevín, this architectural work was buried for years. In 1935 excavations began to recover it, bringing back to life a cold bathing room, a warm bathing room and a hot bathing room. Its ceiling consists of a barrel vault adorned with skylights in the shape of stars. The original semicircular arches, boilers and water systems have also been preserved.

The price per person is €3.50, with a reduced price of €2.75 for groups of more than 10, students under 26 and retired persons. Admission is free for residents, children under 14, accompanying groups of students, the disabled and for Tuesdays themselves. 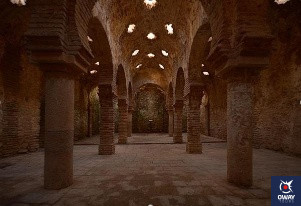 It is a palace of Modern origin from the 20th century, where from its balconies you can enjoy unique views of the Tajo and the city. It is located in the heart of Ronda and its interior houses all kinds of furniture and decoration of the period that will not leave the visitor indifferent. The Granadina family donated their home as a rest house for elderly and sick priests belonging to the Salesian Congregation.

Surroundings of the house are adorned with gardens that lack no detail, such as the tiles of Nasrid origin or the ceramics that dot the place.

Entrance fee is €2 per person, with the option to leave the site and return as many times as you wish until 18:00 in the evening. In this way, visitors can take advantage of the changes in light provided by the day to take incredible photographs of the complex and the surrounding area.

Discover this and more secret places of the city by taking one of our Tours in Ronda in the hands of professionals. 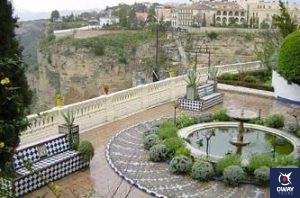 This is a palace also known as ¨Palace of the Marquis of Villasiera¨, which houses courtyards and gardens of Arab and Andalusian origin. It is believed to have been the residence of King Abbel Malik, which means that the Islamic influence is preserved in its architecture even though it was reformed by the Christians at a later date.

Today it houses the city’s Municipal Museum of History and Archaeology. Inside the museum, the visitor can retrace years of the city’s history, accompanied at all times by the various lines of archaeological research that are currently being carried out.

Admission costs €3.5 per person. There is a reduced price of €2.75 for groups of more than 10 people, students under 26 and pensioners. In addition, for children under 14, the disabled and on Tuesdays, admission is free for the public from the European Union.

Immerse yourself in the history of the city through our Free Tours around Ronda. 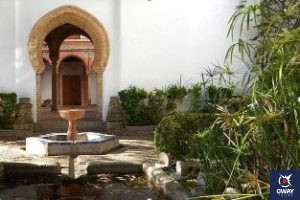 From the city to the heart of the Ronda Highlands, 20 km from the city. This archaeological site is 999 metres above sea level, making it a key strategic location. Its lands are fertile and it has been occupied since Neolithic times. Its remains, on the other hand, come from the Copper Age, the Bronze Age and the Roman Age of the 1st century AD, the latest being the most relevant in this place.

It is known as ¨ Old Ronda¨, even though Acinipo was a different city in its time. Even so, under the name of ¨Arunda¨, these two cities became one in this settlement.

The steep slope of the area meant that a staggered construction had to be maintained, with the theatre excavated in stone that stands out above all of them.

During the 3rd century, the decline of Arunda was noticeable, and it was completely uninhabited by the 7th century.

Admission is free for the general public. 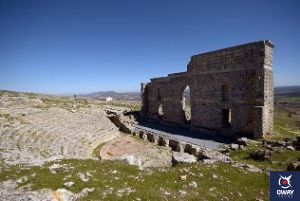