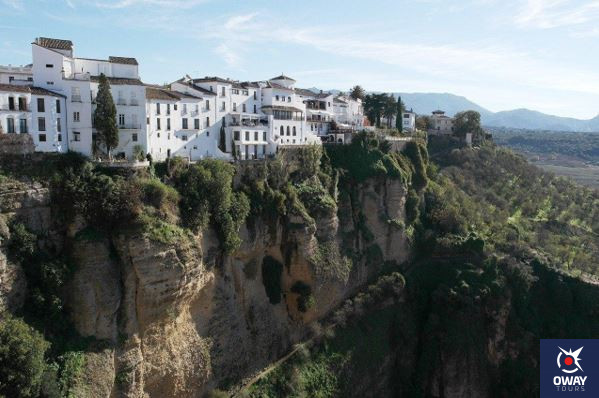 The city of Ronda is located in the province of Malaga. This municipality of Roman origin also welcomes the passage of Visigoths and Muslims, giving rise to a heritage city that exudes culture throughout its streets. In addition, its main use was defensive and agricultural, leaving an important historical legacy in Andalusia.

Most outstanding feature is the gorge that crosses the city, caused by the passage of the river Guadalevín. This feature, together with its historic centre, the number of monuments that stand in it and the surrounding mountains, make this place an obligatory stop for any traveller.

Its proximity to the main cities of the Costa del Sol makes travelling to this town quick and easy. Many people travel from Marbella to Ronda due to the short distance between the two places in order to visit landmarks such as the New Bridge, the Mondragon Palace, the Tajo Boulevard, the palace of the Moorish King or the Arab baths.

At OWAY Tours we tell you how to organise your excursion in the best way and which are the most outstanding monuments and tours of the city to enjoy an unforgettable trip.

How to get from Marbella to Ronda?

Between the cities of Marbella and Ronda there is a minimum distance of 60.1 km. Depending on the number of passengers travelling together, the vehicles available or the comfort preferred by the user, there are several possibilities to choose from.

Visitors can travel in their own car or by carpooling with other individuals. The fastest route takes approximately 1 hour and 8 minutes if you take the A-397. First option costs an average of €8 for petrol and tolls, while the second will raise the cost to an average of €11. It is possible to avoid the motorway by an alternative detour along the same road, leaving a journey time of 1 hour and 14 minutes, or take a detour on the A-355, taking 1 hour and 33 minutes. In Ronda there are also numerous public car parks where you can park your car safely, such as those at El Castillo, La Plaza del Socorro or La Merced.

There is also a less frequented, but sometimes interesting option for visitors: the taxi. This option is perhaps the most comfortable, but also the most expensive, ranging from 65 to 80 €.

Finally, if using public transport, visitors can catch a bus from Marbella’s main station. The shortest bus, line L-304, runs for 1 hour and 21 minutes. This transport has 4 intermediate stops until reaching the destination and has an average price of 7 €. 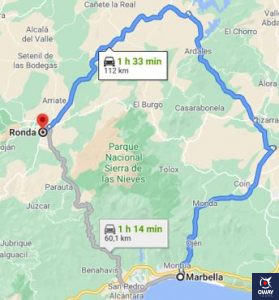 What to do on your tourist visit to Ronda?

Start your tour at the Mondragon palace

This building, popularly known as the palace of the Marquis of Villasierra, is a Mudejar-Renaissance style building from the 14th century that stands in the heart of the historic centre of the city. The Andalusian palace was the residence of many important figures in the history of the town. It also currently houses the Municipal Museum of Ronda.

The museum tells the history of the city through its building and the elements kept in it. It also has both indoor and outdoor garden spaces designed for events with a capacity of up to 80 people. On the other hand, it encourages the consumption of local products and the purchase of souvenirs in the shop located in the stables of the place. Undoubtedly a must-see first visit to the city.

Entrance fee is €3 per person. There are discounts for groups, students and senior citizens, paying a final price of 1.50€. In addition, for children under 14 years old, disabled people and every Wednesday, the entrance to this heritage site is free of charge. 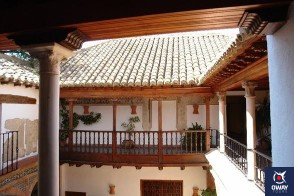 Immerse yourself in history with a visit to the Arab Baths

Also known as the hammam or San Miguel, these 13th century baths are a modification of Muslim origin of the famous Roman baths. Inside you can see rooms with cold, warm and hot water. There are also elements such as the hypocaust, which corresponds to the floor heating system, the boiler and a reception room. The main difference with the Romans was that the Muslims used steam as the main element of these baths, while their predecessors immersed themselves in pools.

Their main function revolved around religious rituals and the development of the social circle. On the other hand, travellers coming to the city were also welcomed here as a reception for their visits. For this reason, this archaeological site is located next to the Puerta del Puente de Ronda gate.

Entrance fee to the baths is €3.5 per visitor. The site offers reduced admission of €2.75 for groups, students and senior citizens. Admission is also free for residents, children under 14 years of age, school groups and people with disabilities. 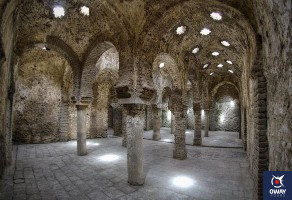 Stroll through the gardens of the House of the Moorish King

This house is part of a monumental complex of some 3,700 m², dating from the 14th century and covering the history of the city up to the 20th century. It is also located on the low escarpment of the Tajo de Ronda, which makes its panoramic views unique and unforgettable.

Its structure is divided into three distinct parts: a mine of Muslim origin, which served to supply water from the river during sieges; the neo-Mudejar building, which corresponded to the main house; and, finally, a garden declared an Asset of Cultural Interest or BIC in 1943, which was created by Jean Claude Nicolas Forestier and designed to remind us of the Mediterranean landscape. Currently, both the mine and the garden can be visited during the established opening hours, although it is not possible to enter the interior of the house due to its deterioration.

The price for this heritage is €7 per person, reduced to €3.50 for children under 12 years of age. There is also a free audio guide service that can be downloaded to your mobile phone. 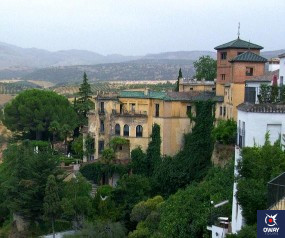 Better known as the house of San Juan Bosco, this building is a modernist mansion located in the historic centre of the city. It was once owned by the Granadinos family, until it was handed over to the Salesian order as a place of rest for the priests and sick members of the congregation.

The elements housed inside are of great historical and cultural value, including ceramics, 19th century tapestries, a traditional Castilian fireplace, furniture made mainly from walnut wood and a beautiful interior courtyard of Nasrid origin. It also has gardens that rise above the edge of the cliff of the Tajo de Ronda, from which unique views of the New Bridge, the city and its mountains can be seen. Great conservation and beauty of all the parts that complete this landmark, make this place a deserved stop for every traveller.

The opening hours are every day from 09:30 in the morning until 17:30 in the afternoon.

The entrance fee is €2.50 per person. There is also a reduced price for groups, senior citizens and people with disabilities, for a total of €2 per visitor. 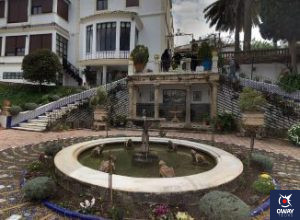 The old church was named collegiate church by King Ferdinand the Catholic. This 13th century building stands on what used to be the Aljama Mosque of Ronda, which is why parts of the Mihrab are still preserved today.

It is believed that its construction began in 1486, after the Christian reconquest. The church combines two architectural styles that developed over two centuries in the same space, Gothic and Mannerist.

Most outstanding elements are the:

The collegiate church is open Monday, Wednesday, Thursday, Friday and Saturday from 10:30 to 14:30, and is closed on Mondays and Sundays.

The general admission fee, which includes an audio guide, is €4.5 per person. Prices without audio guides are €3 for groups and senior citizens, €2 for people with disabilities or those aged 11 to 18, and free for children under 10. 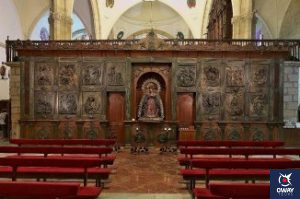 Complete your trip with a Guided Tour led by professional guides

OWAY Tours offers both guided tours of the city and Free Tours, but how do these activities take place?

A good option to cover all the most important monuments of the city in a single tour is through a guided tour. Guides who are experts in the history of Ronda accompany visitors deep into its streets, providing a unique account of its development over time.

These tours include entrance to the most important heritage sites, last 2.5 hours and can be conducted in several languages. As well as including access to some of the aforementioned monuments, the Mondragón Palace, the Santa María la Mayor Collegiate Church and the Casa Don Bosco, visitors can also enjoy the Lara Museum and the Bandolero Museum. Likewise, the guides highlight each and every one of the intricacies that permeate the city during the walks that take place between the monuments.

The prices offered are around €30 per person, with free admission for children under the age of 10. On the other hand, free cancellation 24 hours in advance is another feature that makes visitors choose to book the convenience of this activity during their travels.

Book your Guided Tour of Ronda and immerse yourself in its past. 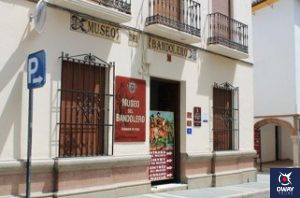 Discover Ronda on a Free Tour of the city

A Free Tour is a tour with a specialised guide that covers the main tourist landmarks of a place. The duration varies between 1 and 2 hours and the price is not fixed. Each user pays a tip according to their evaluation at the end of the visit. The tours are panoramic, but, as they are not subject to timetables, the guides adapt to the wishes of the clients, modifying the route on request.

In addition to the exteriors of the monuments mentioned above, the most important landmarks include the following:

Take our Free Tour of Ronda and explore the city. 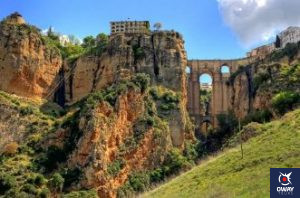