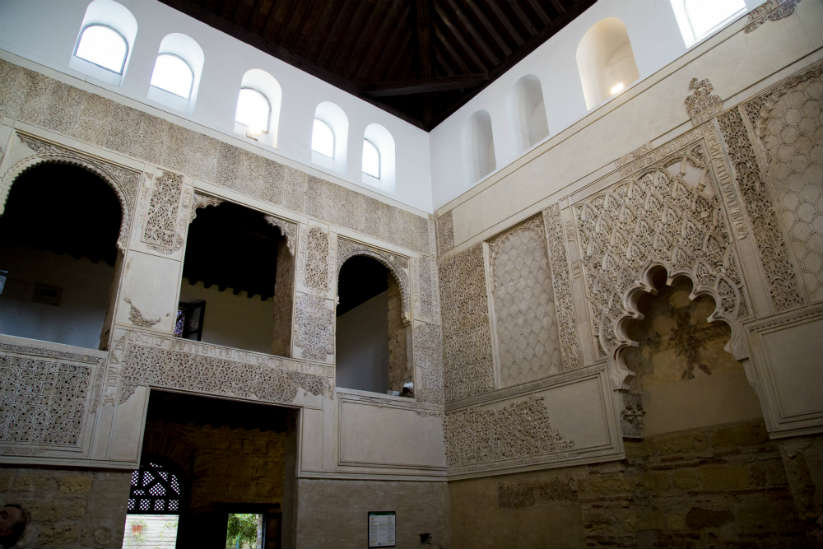 The Synagogue is situated at number 20 of the “Jews Street” opposite the Zoco (market) very near Almodóvar Gate and not far from the Mosque, in the area known as the Jewish Quarter. The Jewish Quarter is World Heritage Site since 1994 and the most important building in the quarter is the Synagogue. This Jewish Temple was built between the years 1314 and 1315 under Alfonso VI during the Christian period according to some discovered documents.

Cordoba synagogue is quite small; it has not a direct access from the street. You enter by a small courtyard with a door to one side with a low brick arch which gives on to a narrow atrium or hall, on its right there are some stairs to go up to the women´s gallery. The entrance hall comes before the prayer room which is a rectangular place with three arches and walls decorated with excellent plasterwork. The higher parts of the wall are well preserved and have kept their rich plasterwork decoration.

The main wall is the Eastern Wall; it is on the right as you walk into the prayer room. It is facing Jerusalem and where the Rabbi performed the ceremony. This wall has, towards the centre, a recess of 2, 88 meters formed by a big arch and two small cupboards at the back which contained the sacred scrolls of the Torah.

On the South wall, above the main door, there is the women´s gallery with three large windows surrounded by a rectangular frame of Hebraic legends. On some of these frames you can still see some paintings.

After the expulsion of Jews, this temple was a hospital to cure rabies, but in 1588 it became an Hermitage dedicated to some saints. In the reforms, painted altarpieces were put on the walls hiding the plasterwork and Hebraic inscriptions. In the XIX Century, it was transformed into a kindergarten school until 1884 when Rafael Romero Barros (Julio Romero de Torres father) doing some repairs discovered the historical value of the building. He studied together with father Mariano Parraga the inscriptions which appeared and allowed them to discover the date of its construction. At the end of the 19th century, after the legal steps taken by Mr. Romero Barros, it was declared a National Monument since it is the unique in Andalusia and second best preserved medieval synagogues in Spain, together with Toledo synagogue.