What to do in Seville in summer?

Discover the Mondragon Palace in Ronda 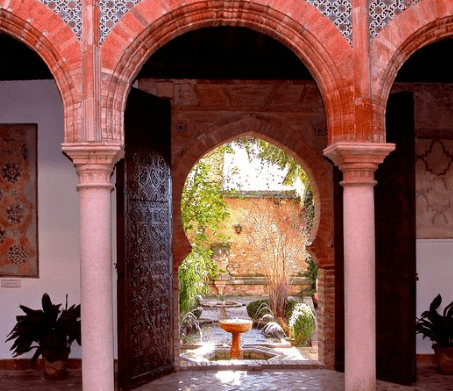 Welcome to the most impressive building in Ronda.

Also known as the Palace of the Marquis of Villasierra, its architecture mixes the Mudejar essence with the Renaissance…and with legends, many legends.

Do you want to know some curiosities of the Mondragon Palace? Today in Oway we tell you some clues. Do not miss it.

The Mondragon Palace in Ronda is undoubtedly one of the obligatory stops in one of our favorite corners of Andalusia, which offers an unbeatable environment.

Ronda is a spectacle for all the senses, an open and unknown book of the most profound history of Andalusia:  here the art of bullfighting was forged and, as they say, the very same Orson Welles and Ernest Hemingway had fun here.

And its abrupt profile is synonymous with resistance and wild nature. Between cliffs, echoes of the birth of the bulls, vigilante bandits and flamenco ‘quejíos’ (lament) you will spend your hours in Ronda.

Some curiosities and information about the Mondragon Palace in Ronda

It offers two well-defined areas: the Mudejar and the Renaissance, which come from different historical periods and uses. This is one of the most distinctive features of the monument.

In its time it was the palace of the Arab ruler Abbel Mallek, or Abomelic, son of the king of Morocco, hence its Islamic appearance.

Its construction dates from the 16th century

The palace is small, but there are still many details in the Mudejar ceilings, some original tiles and the interior patios with balconies.

We highlight the impressive water gardens, miniature relatives of the Generalife in Granada.

In contrast to the House of the Moorish King, the Mondragon Palace has a genuine Arab pedigree.

Two small towers flank a magnificent gate through which visitors pass to enter a building that, centuries after Hamet el Zegri last left it, still speaks of the pride of a vanished glory.

Although it is mostly in the Mudejar-Renaissance style, curiously its second courtyard is late Gothic with impressive stone columns and capitals reused from other monuments in the area.

Visiting the Mondragon Palace in Ronda

Located in the square that has the same name, the palace is now a museum dedicated to the history and prehistory of the area, where you can immerse yourself in history and archaeology through a tour of its rooms.

You can see all the information on their official website

As you will see, its Palace is just one of many examples of the historical and architectural richness of a place that, no matter how much we visit over and over again, always has something new to offer.

What are you waiting for to explore Ronda?