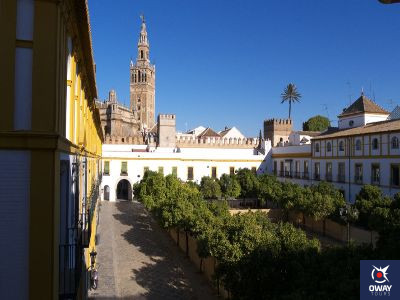 This is one of the places you should not miss when you make a trip to Seville. It is a historical place, being the old parade ground of the Alcázar, it is part of the Royal Alcazar of Seville. This emblematic square belongs to the neighbourhood of La Cruz, its name comes from the old tradition of hanging flags in this place when a king came to visit the city of Seville.

If you want to visit the Alcazar of Seville or a free tour with us, we assure you that you will not regret it. 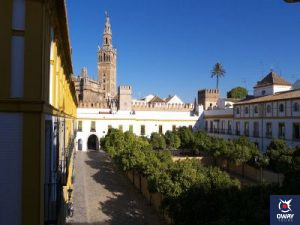 History of the Patio de las Banderas (Patio of the Flags)

The beginnings of the construction of this square date back to the presence of the Muslims in Seville, when King Abderramán III ordered the construction of a palace in this space and it was known as Dar Al-lmara, the Prince’s house or Governor’s house, back in the 10th century. However, it was Philip V who put it to use as an armoury in the mid-18th century.  A long time later, in 1816, benches and a fountain were installed in the centre and the whole area was surrounded by a grove of trees. The benches, however, were removed in 1857 and the trees were later replaced by orange trees.

For a time this square was known as the Plaza Grande, and rightly so, since it is very large in size, although as we have already mentioned, its name comes from the flags that were painted on the wall gate that was in the Plaza del Triunfo and through which one could enter directly into the courtyard.

Considering that the Patio de las Banderas was an enclosed area that was easy to defend, houses were built on either side of it. Particularly relevant in the Patio de Banderas in Seville is house number 2 because it has an Almohad vault and a garden. 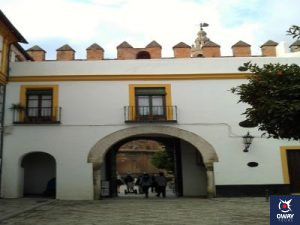 On the occasion of the Ibero-American Exhibition in Seville in 1929, the central part was remodelled, where a completely destroyed fountain used to be, and a new one was placed, adding a new paved area around it and also making it possible for vehicles to circulate around it. During your visit to the Patio de las Banderas you will be able to admire its central fountain, walking through the orange tree grove that surrounds it. You will also see that this courtyard is surrounded by a series of houses in which many famous people have lived, such as the writer Fernán Caballero or the painter Joaquín Domínguez Bécquer. In addition, from the Patio de Banderas in Seville you can admire views of Seville Cathedral and the spectacular Giralda. 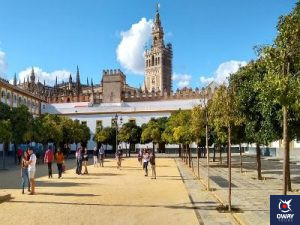 You can admire the interior of the entrance arch, where there is an altarpiece with the Virgin of the Conception, Saint Peter, Saint Ferdinand, Saint Joachim, Saint Anne and Saint Joseph with the Child Jesus in his arms. Near the exit of the halt, there is a wall where the remains of the Jardín del Yeso (Plaster Garden), an example of Almohad art, can be seen.

Remains of the Palace of Al Mutamid

It is also possible to see the exterior of the houses located in this courtyard, some of which contain remains of the Al Mutamid Palace and which have recently been acquired by the Seville City Council to convert them into a new attraction of the Real Alcázar. These are the houses in which we have previously mentioned that famous people lived.

The address of this place is Plaza del Patio de Banderas, with postal code 41004.

In the surroundings of the Patio de Banderas in Seville, it is possible to access the Real Alcazar of Seville. Also very close, a few minutes walk away, it is possible to see the Patio de Doncellas or the Puerta de Jerez. It is also a good idea to wander through the streets of the Jewish quarter of Seville to discover what was once the city’s Jewish quarter. This way it won’t be difficult to find this place because, as you can see, it is surrounded by other attractions in Seville. Although you can walk there, you can also use public transport if you are further away. By bus you can get there with the following lines 03, 05, 21, EA, M-140, M-152, M-153, by train through line C1, by metro L1 and finally by light rail T1.

– Other people who have lived here throughout history include the writer Fernán Caballero and the painters Valeriano Bécquer and Joaquín Domínguez Bécquer.

– The current appearance of the Patio de Banderas in Seville is not the original and dates back to the years prior to the Ibero-American Exhibition of 1929.

– Like all magical corners, this courtyard also has its own legend, the one that says that at night you can feel the footsteps of someone unseen, that someone being King D. Pedro.

– The exit through the Callejón de la Judería ends at the Arco de Las Cadenas and leads to Calle Vida, one of the most famous streets in the Barrio de Santa Cruz.

– It was also a horse riding arena, as it was so close to the halt, today the exit door to the Alcázar. 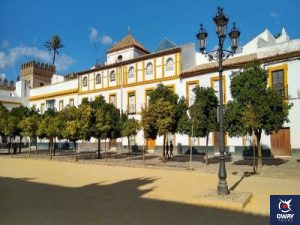