Lions Courtyard in Granada, the heart of the Alhambra

Things to do in Malaga 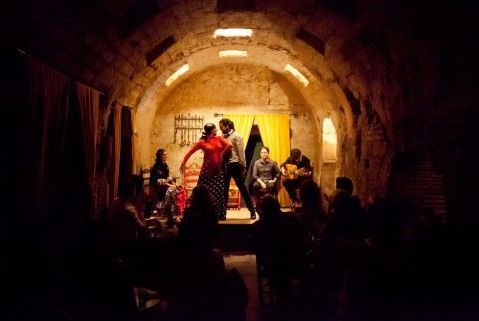 To speak of Flamenco means to speak of Andalusian folklore, of the essence and the culture that, from the South of Spain, finds a space for diversity and inclusion; it is much more than a tradition, and people understand it as part of their identity.

Its origin is imprecise, and is attributed to different cultures, passing through Arab Spain, gypsies, and of course Andalusia, specifically Cordoba, near the banks of the Guadalquivir; and although nothing assures that in a certain date and geographical space the first chord of this music sounded and the first dance step was taken, everyone understands that it was born, belongs and lives in modernity by the people.

The culture of Andalusia makes its folklore a catalogue where flamenco finds a place to stand out. Its staging, its ‘cante agitanao’ full of feeling, the beating of each step, even the dance in pairs, and its ‘tocaores’ guide the ‘tablao’ spectator through an unforgettable experience of art, recognized worldwide, which has been declared Intangible Cultural Heritage of Humanity by UNESCO, and Ethnological Intangible Cultural Heritage of Andalusia, established by the Directorate General of Fine Arts and Cultural Heritage.

The effect over the years and up to the present time has been the extension of its value by different countries, being the Spanish-speaking those who have dared to include it in their cultures, specializing in their particular sound style, song and dance to open academies and create groups.

Where to enjoy a good Andalusian Flamenco show?

The old Arab baths of Santa Maria, located in Cordoba, Andalusia, have become the scene of one of the most authentic ‘tablaos’ in the town. This preserved space keeps the most typical soul of the Cordoba of the 10th century, and offers an acoustic that catches, transports and leaves those who decide to enjoy the Flamenco and Passion Tour speechless.