Things to do in Granada mountains - Oway Tours

Summer in Ronda: An unforgettable holiday

Neighborhood of the Albaicin: Tour through the heart of Granada 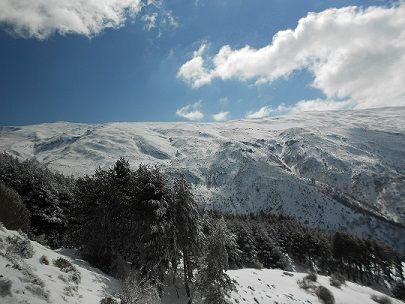 The Andalusian province of Granada is home to some of the most spectacular mountain ranges in the country of Spain and in the whole of Europe: Sierra Nevada and Las Alpujarras. Keep on reading if you want find out evertything about Granada mountains:

With over 20 peaks more than 3,000 m heigth, Sierra Nevada is the second highest mountain range in Europe after the Alps. Its name means ‘snowy mountain range’ in Spanish because it is snow capped nearly all year round. Its highest peak, the Mulhacen, rises to 3482m. Along with the Pico del Veleta, at 3,396m, they are the highest peaks in the Iberian Peninsula.

Distinguished as a National Park in 1998, it was declared a Unesco Biosphere Reserve in 1986 in recognition of its exceptionally diverse flora and fauna. The protected area encompasses 86,208ha of sheer-sided gorges, stony scree slopes, torrential rivers, glacial lakes between snowy summits and, in the foothills of the Alpujarras, cultivated terraces of vegetables and almond trees.

In the west side of the park you will find Solynieve, Europe’s southernmost ski resort, where the ski season usually runs from November to April. It has 131 ski slopes with 110 km total length. There are 21 ski lifts with a capacity for almost 45,207 skiers per hour.

Solynieve offers unbeatable conditions to enjoy skiing and snowboarding with more days of sun than any other ski resorts in Europe. Apart from skiers and snowboarders at the resort, the park is popular among hikers, mountainbikers, climbers and birdwatchers.

The peaks of the Sierra Nevada give rise to the beautiful mountain range of Las Alpujarras, which extends through both Granada and Almería provinces. The district became a hotbed of Moorish rebellions after the Catholic conquest of Granada in 1492, . The inhabitants of Moorish descent ‘moriscos’ were evacuated and expelled from Spain in 1570, being replaced by colonists from Extremadura and Galicia.

Relaxing in hot spring and spas

Mountains in Las Alpujarras are dotted with natural springs and spas mostly adapted for public use. Rich in bicarbonates, calcium, magnesium, iron and phosphates, their mineral-medicinal properties of Las Alpujarras were recognized by the ancient Romans and they are suitable for treating anemia, improving the skin and relieving rheumatic, muscular or gastric complaints.

This area is home to many spas or ‘balnearios’, but the Balneario de Lanjarón, located in the town after which it is named, is probably the most renowned. It has five separate springs, each with their own traits and properties, which act as a muscular analgesic and sedative, as well as their many other qualities. The nearby waters of La Tahá that spring up in the Bermejo Canyon are perfect for boosting your iron levels.

Other famous spas and hot springs within the area are Balneario de San Nicolás, in the city of Alahama, or the one located in Laujar de Andarax, where you can drink from the 16 springs that exist in the town. Mid-way along the 11 kilometers that separate this town from Paterna del Río, lie the famous Baños de Santiago in the municipality of Guarros. Also very popular for boosting iron levels in the blood is the Fuente Agria spa in Paterna del Río and, seven kilometers further on, the Bayárcal spa.

The vegetation of this area is unparalleled in Europe: from sugarcane and palm on the coast through belts of citrus, olive, chestnut, vine and oak to alpine flora at higher elevations. Pig farming and the production of ham for export are also important to the local economy. Thanks to the construction of modern r the exploitation of iron, lead, and mercury is increasing.