The Gastronomy of Granada 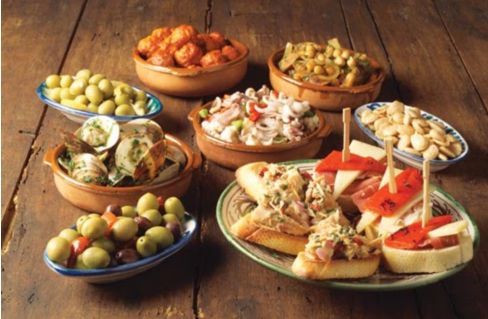 Granada is a very multicultural city and province, with a lot of history, and with a gastronomy very influenced by spicy and oriental flavours. Furthermore, Granada’s gastronomy is rich in vitamins and nutrients as it is based on fresh products grown in Andalusia, a really cultivated and sunkissed land.

The gastronomy of Granada is very varied and the most important thing: everything is delicious! If you want to know the typical dishes and desserts of Granada and its villages, keep on reading!

The Sacromonte omelette (tortilla) is the typical Granada omelette, whose name comes from the Granada neighbourhood of Sacromonte. It is a very elaborate omelette, which contains much more than an ordinary potato omelette. It is made with ram’s brains, criadillas and other types of casquería (a type of meat) and normally, peas, nuts and breadcrumbs are also added. 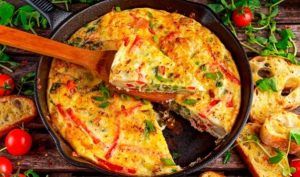 Remojón Granadino or remojón de naranja (orange) is a dish that comes from the Arab tradition that was present for years in Muslim Granada. It is also typical of the provinces of Almería and Jaén although its recipe varies depending on the town. The basic ingredients are oranges and olive oil. If it has salt it is considered a salad and if you add sugar it is considered a dessert. In Granada, it is typical to add to the salted version cod, olives, eggs, onion, garlic, vinegar, paprika, potatoes or tomato. 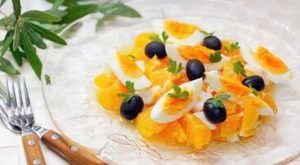 Moraga of sardines is the most seafaring typical dish of Granada, which is made mainly with sardines from Motril. The sardines are placed in a clay pot, they are bathed in white wine and lemon juice, olive oil and garlic, parsley and salt are added. Once all the ingredients are in the pot, they are cooked 10 minutes until they are ready to eat. 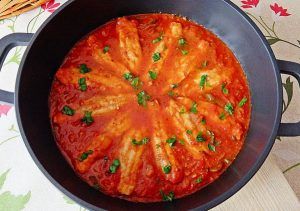 The zalamandroña is a typical food of the municipality of Guadix whose origin belongs to the Andalusian period of the ninth century. Traditionally, the first step in preparing this salad is to dry the vegetables in the sun during the summer (roasted and dried pepper, zucchini, pumpkin and dried tomato). Nowadays, the oven is also used to dry the vegetables and onions, desalted and crumbled cod, black olives and olive oil are added to these vegetables and the dish is served cold. 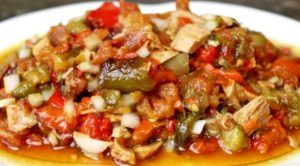 Beans with ham are a typical dish from Granada, but they are cooked all over Spain. It is a very easy dish to make, as it consists of a fried bean and ham until they are poached. The beans are then added and covered with a broth of beef, chicken and vegetables. Everything is cooked for 15 minutes and that’s it! To make it even tastier, you can add a fried egg mixed with the beans and the ham. 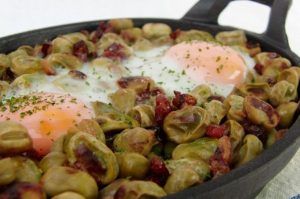 The Olla de San Antón, also known as Sanantonada, is a stew or pottage typical of Granada, Murcia and Jaén. It has beans or dry beans and rice, black pudding and parts of the pig are added after the slaughter, such as mask, ear, tail and lean. The slaughter of the pig is done near the festivity of San Antón (January 17), reason why the dish receives that name. 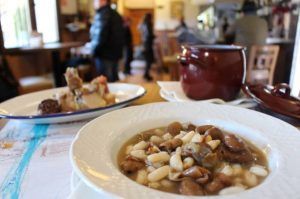 Aubergines accompanied by cane honey is a dish of Arab origin and, although it is becoming more popular in other regions of Andalusia, it is typical of Granada and Cordoba. It is one of the most popular dishes in bars and restaurants and is served in the form of a tapa or as a complete ration. To prepare it, you cut the aubergines, put salt on top and wait half an hour for them to stop tasting bitter. Then, they are dried, floured and fried in a frying pan with abundant olive oil until they are golden. When they are crunchy, pour the honey over them and they are delicious! 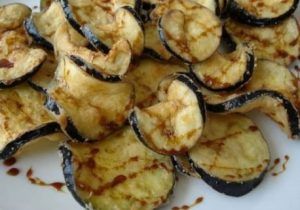 The gurupina is a typical dish of the municipality of Baza that is prepared mainly with kid meat, which is browned in a casserole with oil, garlic, pepper and bathed in wine. Fried bread, white wine and almonds are added and it is served with zucchini or fried potatoes. 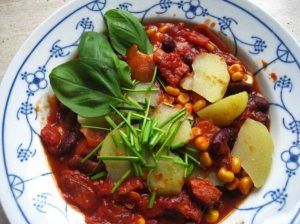 The city of Granada stands out for its tapas bars, where you will get a generous tapa every time you order a drink. In some bars, you can even choose the tapa you want from the menu. The tapas areas in Granada that we recommend are: Elvira street, the Albaicín and Navas street. 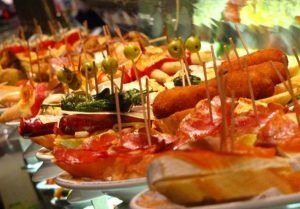 The Alpujarra dish, as its name suggests, is a typical dish from La Alpujarra, a region of Granada and Almeria. This dish usually includes morcilla (a type of sausage), pork loin, sausage, fried potatoes, fried eggs and jamón serrano from La Alpujarra. Simple and plain, but very tasty.

Piononos are the most typical sweets of the province of Granada and are original from the town of Santa Fe, in the region of La Vega. This delicious dessert is made with a sheet of sponge cake moistened in syrup that is filled with egg yolk and rolled up and sprinkled with caramel and sugar. Sounds delicious, doesn’t it? 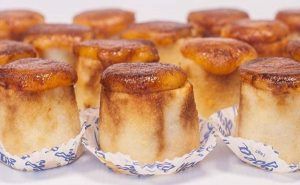 The recipe of the Soplillos de la Alpujarra is centuries old, as it was a typical sweet from Al-Andalus. Over the years, the recipe was passed on to the monasteries, where the nuns made them at Easter and Christmas. They are made with eggs, sugar, almonds and lemon, the ingredients are mixed together to form a meringue which is then baked to be fluffy inside and crunchy outside. 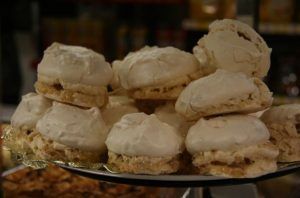