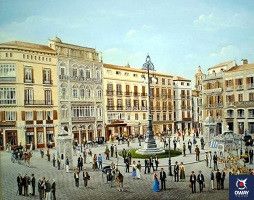 The history of Malaga as a cultural centre begins with the arrival of the Phoenicians and culminates with a great tourist development in the 20th century which made it one of the main Spanish cities. During those centuries, Malaga has hold different cultures that have shaped the architecture of the city as we know it today. If you want to know in more detail what the real history of Malaga is, read on!

The first cultural enclave settled in the capital of Málaga was in 1000 BC when the Phoenician colonization of the southeast coast of Andalusia began with the foundation of Gadir (Cádiz), which was followed by the foundations of Malaka (Málaga) in Cerro del Villar, Sexi (Almuñécar) and Abdera (Adra) in 800 BC.

During the Greek colonization of the peninsula, there were settlements near the capital of the province. In Roman times, Malaga remained under Carthaginian rule for more than seventy years, until after the Punic Wars in 202 BC, Rome was victorious and Malaga became one of the provinces of Hispania Ulterior, the Baética, under the rule of Augustus. During these years, the Municipium Malacitanum was a transit point within the Herculean Way, which communicated culturally and economically with the interior of Hispania with the other ports of the Mediterranean. Malaga, a cultural enclave and port, was a key settlement during this period, which is why the Roman Theatre was built, which is now one of the oldest in Hispania.

However, in the year 325, with the celebration of the Council of Nicea, Malaga is one of the few Roman enclaves in Hispania where Christianity had taken root and where many anti-Roman uprisings had taken place.

After the division and crisis of the Roman Empire, Malaga became a settlement of the Germanic peoples, specifically of the Silingo Vandals who brought the Arian creed from the East in the fifth century. The bishop of Málaga, Severo, stands out for his apology of Catholicism and against Arianism, the first name linked to the cultural history of Málaga.

At the beginning of the 8th century, the Visigoth monarchy began to collapse and by the middle of the century, the Arabs and Berbers arrived on the Iberian Peninsula from the coast of North Africa. Malaga became part of the Muslim region of Al-Andalus, which meant a flourishing period. The city is surrounded by a wall with five large gates, full of suburbs and neighborhoods that were also walled. Orchards were planted on the banks of the Guadalmedina, which was crossed from east to west by a road connecting the port and the inner fortress. Attached to the city were the Jewish quarter and the Genoese merchants’ quarter. Two great monuments remain from this period, the Alcazaba and the Gibralfaro Castle. Malaga is part of the Nasrid kingdom from the 23rd century and in the 14th century, the first attempts of conquest by the Christian troops took place.

The capture of Málaga by the Catholic Monarchs took place on the 19th of August 1487, during which small uprisings were very important, in which the convents of La Victoria and La Trinidad were built. The city began to change under the new mandate. The first big square was built, the Plaza Mayor (today called Plaza de la Constitución).

Between the 16th and 18th centuries, the city experienced a decline due to the Moorish rebellion, epidemics, earthquakes and floods caused by the Guadalmedina River, although the expansion of the port facilitated the resumption of trade in wine, raisins and silk. However, it was from the nineteenth century when the city of Málaga experienced its greatest boom at the hands of important bourgeois Malaga families. Thanks to them, industrial activity grew considerably and especially the textile industry experienced great development, as did the iron industry, while communications also improved.

With the disentailment and demolition of old church buildings, the Marqués de Larios Street and the Alameda were opened, which facilitated the growth of the city. Some political vicissitudes of the 19th century left horrible memories, such as the execution of Torrijos and his followers.

The 19th century ended with a deep economic crisis, due to the collapse of the incipient industry and the phylloxera plague. The crisis would be even worse in the first decades of the 20th century, until from the 1960s onwards, the tourist boom revitalised the province of Málaga and the city became one of the favourite destinations for summer holidays and one of the most important Spanish cities, with a high-speed train station and an international airport, which had an even greater influence on Málaga becoming one of the country’s major tourist attractions.

The Best Nightclubs in Malaga

Information about the Port of Malaga