Guadalquivir River in Cordoba: activities to enjoy it

The Great Theatre of Cordoba 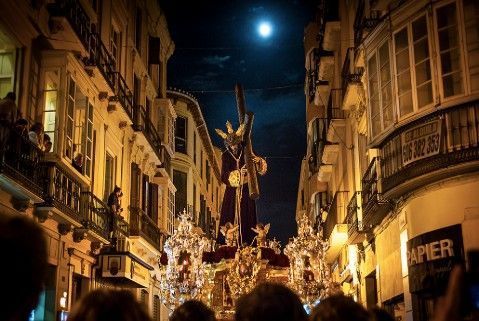 Malaga tells the vibrant story of two tales. On the one hand, its incredible natural light gives it an incomparable joy, which has influenced the world of art. On the other hand, its most mystical devotion manifested in the Holy Week, one of the most popular ones in our country. During the Holy Week the streets are filled with a magical atmosphere where the silence and the smell of incense are only broken by some spontaneous saeta in order to transform the religious feeling.

With its own peculiarities, and sharing essence with the magnetic processions that take place in Andalusia during this period, we certainly recommend you visit Malaga in this time of the year, in order to feel an unequalled experience in Andalusia.

What will you find during the Holy Week in Malaga

With a history of more than five centuries, devotion has been shaping a landscape with traditions that have not changed, and some others that have been incorporated to update the unique way of feeling of the people of Malaga.

During these days, the majesty of the thrones is interspersed with the Nazarenes and penitents, and with the applause and improvised songs. Each procession, and each day of the Holy Week are different in Malaga, where the processions begin from the Palm Sunday to the Resurrection Sunday, and each day six or seven brotherhoods make their respective routes.

Recommendations to visit Malaga in the Holy Week

Each year, the routes and processions may vary, as well as the dates. Although it is true that they are usually similar, we recommend that you to consult the official schedule each year.

How does the route work? More than forty brotherhoods depart from their houses or churches, and almost all of them make the same official route, almost a kilometre long that starts in the main Alameda and ends in Granada Street. You must know that this is a moment of devotion, so it is advisable to keep respect and silence if the procession requires so.

At last, the processions usually last a long time, so we recommend you enjoy them with some typical caramel-coated almonds or caramelized apples.
Free walking tour 0€ Book

Each procession has its own peculiarities, for example, the Pollinica on Palm Sunday is dedicated to children, the Gitanos on Hole Monday is marked by songs and dances, such an experience.

Without forgetting the procession of the Rico on Holy Wednesday, where the pardon is granted to a prisoner who has not committed a blood crime. This grace goes back to the time of Charles III: during the epidemy of cholera the prisoners saved the figure of Christ and none took advantage to escape.

Visiting Malaga during the Holy Week

To sum up, the Holy Week in Malaga becomes a unique experience. It should be noted that, although it always goes without incident, the only thing that can cancel the processions is the rain. Therefore, if you are going to visit Malaga in the Holy Week, we recommend you to know in advance the weather forecast. But the weather, like devotion, is always unpredictable. Although this is not an impediment for Malaga to enjoy Holy Week as only this city knows: with passion, devotion and joy.

Also you can check our best Tours in Malaga on the next links: Caminito del Rey Guided Tour Free Tour Malaga
Compartir