Holy Week in the incomparable city of Malaga | Owaytours.com 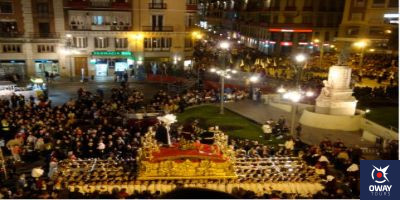 Malaga is, after Seville, the second largest city in Andalusia, so it has a Holy Week to match its size. It brings together all the splendour of Andalusian Holy Week but adopting a characteristic stamp that makes it unique, which is why it was named an International Tourist Interest in 1980. For some, it is a spectacular experience in which the whole city is involved. You only have to see some of the images to realise that something special must be experienced. So we invite you to continue reading to discover the mystery.

Information about Holy Week in Malaga

The first brotherhoods date back to the conquest of Malaga by the Catholic Monarchs in 1487 and by the beginning of the 16th century, there were already five brotherhoods known in Malaga. The purpose of these brotherhoods was not only to go out in procession, but they also committed themselves to fulfilling the last wishes of the sick, which included a dignified burial.

During the years 1931 and 1936, looting and assaults were carried out on different churches in the city of Malaga, causing serious damage to some images, and even the disappearance of others. However, it was from 1936 onwards that Malaga’s Holy Week took on a great deal of momentum, until it became the Holy Week that we know today. A total of 42 brotherhoods take part in the seven-day procession. 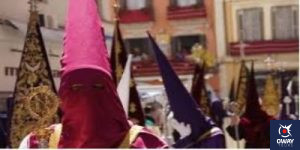 Friday of Sorrows and Saturday of Passion

During these days prior to the important days, there are many preparations that the brotherhoods must make, such as the assembly of the thrones. For this reason, you will find a great deal of people moving around the city who come to the temples or brotherhood houses to see how everything is prepared. If you are used to fleeing from large crowds, we invite you to visit some of the brotherhood houses these days. You can get to know the great work they do and also enjoy the great thrones from close up.

Even so, if you are looking for a completely different activity. If you prefer to take a break from the city, we advise you to try the Caminito del Rey. An activity that mixes sport with disconnection and that will leave you with your mouth open. Next, we leave more information about the Caminito del Rey Guided Tour that we offer. 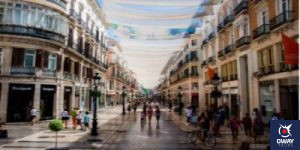 The first day of Malaga’s Holy Week begins with the departure of nine brotherhoods through the city’s most emblematic streets. Among them is the Brotherhood of La Pollinica, which goes on procession in the morning and is made up of a large cortege of boys and girls dressed in Hebrew. Other brotherhoods that set out on this day are the Prendimiento from the Capuchinos district, and the Huerto from the Perchel district, linked to the olive growers’ guild. 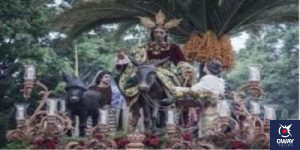 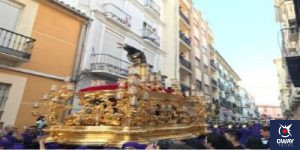 There are also six brotherhoods that take part in the procession on Easter Tuesday. On this day the brotherhood with the largest route of all (Nueva Esperanza) and other of the city’s most loved images, the Virgen del Rocío, known to all as “the Bride of Malaga” for the clothing (completely white) that she usually wears. Other brotherhoods are those of El Rescate (the Rescue), Humillación (Humiliation) and Sentencia (the Sentence). 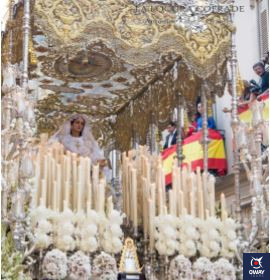 On Wednesday the number of fraternities grows to seven. The highlight of the day is the Virgen de la Paloma, another of the city’s most devoted images, during which doves are thrown. The Brotherhood of El Rico, which until a few years ago pardoned a prisoner since the order of King Carlos III, also holds a procession. 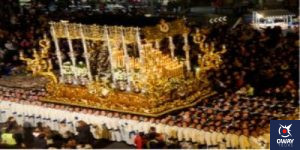 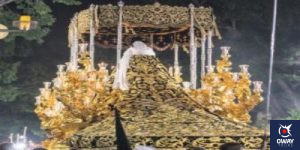 Just as on Holy Thursday, eight brotherhoods carry out penitence stations in the streets of Malaga. It is a day marked by mourning for the death of Jesus. Among the most outstanding brotherhoods on this day we can find El Descendimiento (the Descent), a spectacular mystery that represents the moment when Jesus is taken down from the cross, the Brotherhood of Monte Calvario, characterised by silence and recollection. 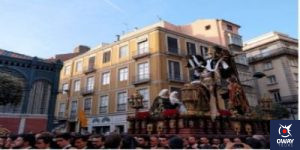 The sobriety of Holy Friday is replaced by the joy of Easter Sunday. In contrast to other cities where there is a Brotherhood for this purpose, in Malaga all the corporations from previous days form the procession on this day. 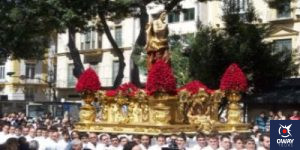 Now that you know some of the most outstanding brotherhoods of each day. Tt’s time to know those places that are most important to enjoy the passage of the processions.

One of the options is to go from one side of the city to the other in search of them, something that can be very tiring and even frustrating if you don’t know the city well, so our best advice would be to go to one of the following places to enjoy the unique moments that the Malacitan brotherhoods offer. 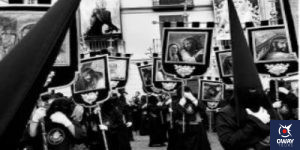 Like all Andalusian cities, there is a section through which all the brotherhoods pass before returning to their respective neighbourhoods. Throughout this area we can find chairs and stands to make ourselves comfortable. In 2019, due to works, this route was moved, starting in Cisneros Street, continuing in Larios Street until reaching the Cathedral. 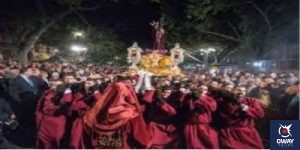 It is not known where such a name comes from, although it can be deduced. Although getting a season ticket for one of the stands in the Plaza de la Constitución is an impossible task, in Carretería de Málaga Street there is a staircase with 16 steps where many Malaga people go to enjoy the passage of the brotherhoods. The arrival of the brotherhoods at this place translates into an overflowing joy for the people of Malaga. 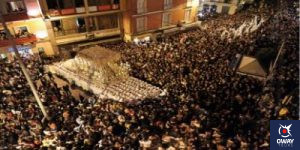 Cathedral of the Annunciation

This Renaissance temple is the most important in the city and is the perfect setting to see the passing of the brotherhoods. Although not all of them enter the cathedral due to the size of their thrones, many do. This magical place is within our offer, so we invite you to take a look at the Malaga Free Tour. 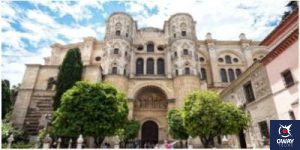 A clear difference between Malaga’s Holy Week and that of the rest of Andalusia lies in the way the sacred images are carried. While in most places it is done on the neck, in Malaga they are carried on the shoulder, hence the so-called men on thrones. On these thrones the number of men to carry them can be as high as 280.

Due to the magnitude of the thrones, most brotherhoods cannot leave the churches because of the small dimensions of the doors, so they do so from brotherhood houses. We invite you to visit some of these as you will be surprised by the magnitude of these buildings. The brotherhood’s belongings are kept inside throughout the year and even if you visit the city at a different time of year. You will probably find one open and you will be able to see the inside.

As is the case in other cities, the brotherhoods are very active during the rest of the year, from welfare works, the financing of soup kitchens that give food to the people who need it most, as well as the celebration of masses, known as internal cults in which devotional images are venerated. 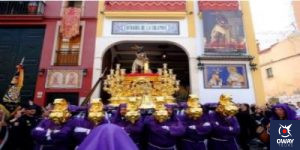