Lions Courtyard in Granada, the heart of the Alhambra 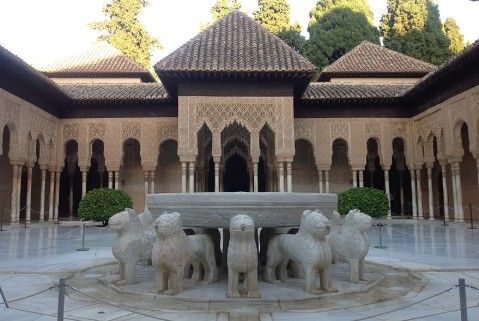 The Lions Courtyard in Granada, specifically located in the Alhambra, is synonymous of creativity, talent and good architecture; moreover, the hydraulic system of the fountain has been a reference for years due to its double function of filling and emptying that keeps the water practically without movement and without even a drop overflowing. If you haven't had the privilege of visiting this space yet, read on and program your visit, because you're going to love it.

What is the history of the Patio de los Leones in Granada?

Muhammad V was the one who required the construction of the Patio of the lions of Granada or "the heart of the Alhambra" during his second term of office. According to history, his government reached the peak of the Nasrid sultanate and the Lions Courtyard concentrates all the artistic styles of the time.

On the edge of the fountain there is a poem written by the ruler, in which he speaks of the blessing it meant to build the palace and the beauty and transparency of the lions, similar to water.

Architecture of the Lions Courtyard in Granada

Its scheme is framed in the traditional Hispanic Muslim housing: a central open courtyard serves as a center for family life, and around it are the main rooms with a ground floor and, at least, one terrace or upper floor.

In the Lions Courtyard of the Alhambra you can appreciate a central fountain with 12 perfectly carved lions, those who visit it agree that it is a work of the finest architecture and difficult to reach.
Alhambra of Granada Guided tour 49€ Book

A little over a decade ago the fountain lions were removed and taken to a nearby building for maintenance. This handmade process required infinite patience and meticulousness, according to the managers. While the lions were gone, the fountain remained clogged to avoid environmental damage, as it cannot be moved from its location.

The intervention was directed by the Patronato de la Alhambra, and this, in turn, advised by the Institutes of Spanish and Andalusian Historical Patrimony, that formed a technical commission to supervise the works. There were few risks, in order to avoid damages or accidents.

Popular Interpretations of the Lions Courtyard in Granada

To this day, no document or information has been found that explains the meaning of this space and the fountain that exalts it. Some say that the 12 lions could represent the 12 signs of the zodiac; others say that the four points of the room make a compass pointing to the four cardinal points. However, the most popular version refers to the fact that it was a symbol of the power of the sultan, referring to the source of life and the four rivers of the Koranic paradise.

Visit the Lions Courtyard in Granada and tell us about your experience.


Also you can check our best Tours in Granada on the next links: Alhambra Guided Tour Cathedral of Granada Guided Tour Free Tour Granada
Compartir

The Best Arab Baths in Granada

The Weather in Granada