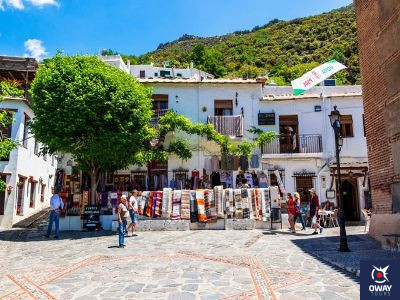 The Alpujarra is a historical region of Andalusia situated in the southern foothills of the Sierra Nevada and divided between the provinces of Granada and Almeria. This region, once inhabited by Iberians, Celts, Romans and Visigoths, was one of the last to be conquered by the Muslims and the last to be inhabited after the surrender of Granada in 1492. Much of its territory is within the Sierra Nevada National Park and with the adjoining villages of Bubión and Capileira form the Conjunto Histórico del Barranco de Poqueira.

What to visit in Pampaneira

This beautiful village, with barely 350 inhabitants, conserves many of its own signs of identity due to its great and diverse history, such as its narrow and steep streets, cobbled and with water channels in the centre, its traditional white houses with sun terraos and tinaos, its looms and local craft shops that fill the squares and streets with colourful jarapas. Classified as a historic-artistic site together with Bubión and Capileira, it received the First Provincial Prize for the Beautification of Villages in 1976, and in 1977 and 1978 it was awarded the National Tourism Prize for the Beautification and Improvement of Spanish Villages. Every autumn, this town holds a craft, agricultural and tourist fair, considered to be the most complete fair of its kind in the whole region. It also includes gastronomic products, mainly Moorish confectionery and pork products. 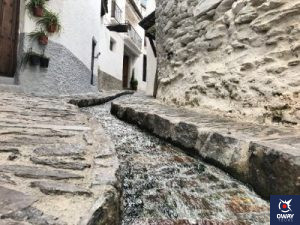 This square is located in the centre of the town, where you can see the peculiar fountain of San Antonio. This square is also home to Pampaneira’s most emblematic building, the parish church of Santa Cruz. It is lined with simple white houses and numerous craft shops for tourists, displaying their products directly outside, as well as different bars and restaurants that in summer set up their lively terraces in this square.

It stands out from the rest of the village due to the ochre colour of its roof tiles and the brick of its walls. It was ordered to be erected by the archbishop of Seville on 15 October 1501 and although over time it has been in danger of ruin due to the maintenance with different works, it has never been destroyed. The parish church, consisting of a single nave, has a splendid coffered ceiling in the Mudejar style and four wooden altarpieces from the 17th and 18th centuries.

The Fountain of San Antonio, a saint much prayed to by marriageable women, as he is traditionally considered the patron saint of brides and grooms, is known, not for the character of its fresh waters or because they have a special flavour, but for the “powers” attributed to it to obtain a partner, and even marriage.

This washing place is about 200 years old and although it is practically abandoned, it is a beautiful place to visit as it contains the daily history of the Alpujarra. Nearby there is also a pond with ducks and some animals to have a good time.

This is one of the typical streets to visit, narrow and steep, with a canal running through the middle which is always full of water. It starts at the Plaza de la Libertad and ends at a viewpoint where we can admire the views of the lower part of the Poqueira ravine.

Here you will not only be impressed by the scenery, activities and architectural beauty of the area, but you will also enjoy a gastronomic paradise. The cuisine is simple, natural and tasty, with a wide variety of quality local dishes that make the gastronomy of the Alpujarras an attraction in itself for those who come to the region in general, with delicacies such as Jamón de Trevélez, Lomo de orza and Migas alpujarreñas.

For those with a sweet tooth, the Muslim heritage is present in the Alpujarran pastries, with a wide variety to choose from: tortas, soplillos de almendra, pan de higo, roscos and more… 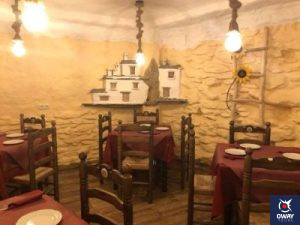 The Ruta del Mulhacen Restaurant in Pampaneira offers traditional Alpujarran cuisine, with dishes prepared with local and seasonal products. In addition, the building where it is located is in keeping with the unique architecture of the Alpujarra Alta.

This is another of the recommended restaurants in the area if you fancy trying traditional Alpujarran food cooked in a wood-fired oven, just like our grandmothers used to make it.

The last recommendation is located in the middle of nature with home cooking and home made products and traditional cultivation.

With abundant dishes and once again with typical products of the area. We find the artisan restaurant-museum “Casa de la Abuela”, which elaborates its products with the old recipes of the grandmother.

Although in the village of Pampaneira there are not many accommodations, all of them have a great valuation by their clients. Here we leave you the most recommended places to spend your days in Pampaneira, although you should add some rural accommodation such as Casa Manzano. In addition, in the neighbouring towns of Bubión and Capileira you can find many more alternatives. 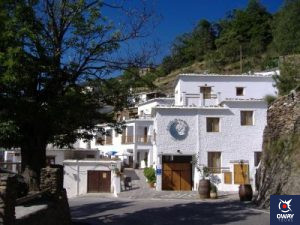 These rural lodgings offer all the comforts to make you feel at home in a unique environment.

This three star hotel has all the services you need to enjoy a very promising stay. Built on the slope of the Sierra Nevada overlooking the Barranco de Poqueira. It has been adapted to the typical characteristics of the Alpujarra in all aspects of construction and decoration.

How to get to Pampaneira

Pampaneira is located in the southern foothills of the Sierra Nevada, 67 km from the centre of Granada. The last 30 km are along a winding, uphill mountain road through the Alpujarra Granadina towards Trevélez. From Granada take the A 44 towards Motril and turn off at exit 164 Lanjarón – La Alpujarra, so the best way to get to this incredible setting is by car. You can also go by bus. It is less practical because there are few buses from Granada to La Alpujarra and the price to go by taxi is expensive.

By bus you will have to take the bus to Trevélez, as it stops in the different villages of the Alpujarra, including Pampaneira. There are only two buses a day and the departure times are 10:00 and 16:00 from Granada. The return times are 12:25 and 19:05 from Trevélez.

Our best guided tours in Granada can be found here: