Royal Stables: The Cathedral of the Horses - Oway Tours

Royal Stables: The Cathedral of the Horses 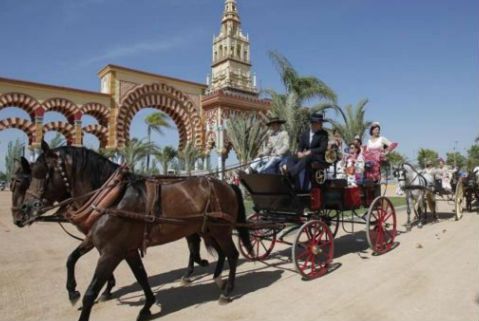 Córdoba's passion for horses is materialised in the Royal Stables, a place where equine history meets one of the city's greatest attractions: equestrian shows.

Named 'The Cathedral of the Horse' by Lorca, it is a world-class reference point for horse-riding and the monumental building is a National Heritage site you can also visit.

To enjoy either the trainings or the impressive shows where equestrians mix music, art and dance to create a unique representation. The sport competitions are also an exhibition worth seeing.

In summary, the Royal Stables are an essential part of Cordoba's culture. And that is why today in Oway Tours we want to share with you some curiosities and the history of this impressive place dedicated to the sacred animal of Cordoba... with permission of the bull.

The horse in Cordoba

Cordoba's connection with horses comes from afar. With the creation of the Royal Stables by order of Felipe II, began the idyll of the city with the equine world, culminating in the birth of the Pure Spanish Horse, the most famous horse in the world, and the symbol of the empire. This tradition was kept alive, but today the equine culture is at its peak thanks to the horse competitions, shows and numerous equestrian schools in Cordoba, which are world reference.

The centre of this passion for the horse is developed in the Royal Stables of Córdoba, which keeps this legacy alive through shows and the dissemination of equestrian culture.

As we have said, the Stables were created in 1570 by order of Felipe II. The reason was his passion for horses. This place gave birth to the new breed that was the origin of the Pure Spanish Horse, the best horse to ride.

Built on the old stables of the caliphal era, which used to house more than 2,000 horses in their time of splendour, and extended to the Guadalquivir shores.

The current stables, after being built in the 16th century, were set on fire in 1734 and were completely destroyed. They remained forgotten until eleven years later, when Fernando VI had them rebuilt.

Then it became the property of the State until 1886 when the Spanish army took over and continued the tradition of horse breeding until 200, when the City Council of Cordoba started to be in charge of the building through the Department of Tourism and World Heritage.

Since then, the building has maintained a cultural and sporting focus. In 2006, the local police cavalry section moved to the building and has its own training area. Today, the stables host all kinds of fairs, shows and equestrian competitions.

Visit to the Royal Stables

The vaulted rooms are worth a visit, where the main block has an impressive groin vault supported by stone columns. It is possible to visit the stables to see the training from Tuesday to Sunday from 11h00, and also to enjoy its most famous spectacle: 'Passion and Magic of the Andalusian Horse'.

Throughout the 70 minutes of the show, there is an exhibition where music, history and horses merge in the unique building of the Royal Stables.

Do you want to see the fusion of flamenco with the best horse in the world? And see the living legend of the Pure Spanish Horse up close? Then we recommend you to discover the most equestrian part of Cordoba.