Museum of Fine Arts in Cordoba

Ruins of Baelo Claudia in Cádiz 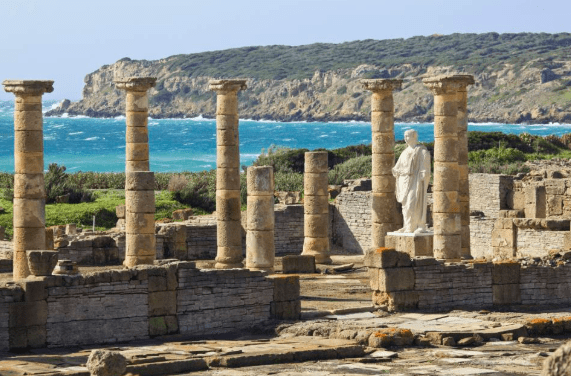 Did you know that Baelo Claudia is the best-preserved Roman site in Spain? About 20 km from the city of Tarifa in Cádiz, you can discover the remains of a settlement that was once a seafood factory. A settlement that continued to grow until it became one of the most important commercial centers on the coast…in none other than the 2nd century BC.

Do you want to discover the Roman soul of Cádiz? Today at Oway we take you on a tour of the Baelo Claudia Ruins in Cádiz…don’t miss it.

History of Ruins of Baelo Claudia

With a well-known foundation dating from the end of the 2nd century BC, it was established as a commercial meeting point with the North African routes and as a gateway to the exchange of goods with the Iberian Peninsula.

Its importance as a commercial and administrative enclave would increase until its peak between the first century B.C. and the second century A.D. when it began to decline as a result of a tidal wave that devastated the city.

-Baelo is a port where people usually embark to Tingis, in Mauritania. It is also an emporium that has Strabo salting factories (year 18 A.D.)

After the tsunami, the city would fall into oblivion following the looting by pirates from Mauritania and Germany.

Indispensable on your tour to Baelo Claudia

The ruins of Baelo Claudia in Cádiz are made up of the remains of the ancient city formed by:

The theatre is positioned as one of the main axes and parallel to the commercial activity.

A novel approach considering the working-class nature of the settlement.

The theatre was designed to hold no less than 2,000 spectators.

-In the plays performed at the Baelo Claudia Theatre all the characters were played by men, even the female characters for whom they wore masks.

Visiting the Ruins of Baelo Claudia in Cádiz

What are you waiting for to discover the Roman soul of Cádiz?