Granada: A millenary walk through the magic of the Alhambra and the Generalife

How long to spend in Seville 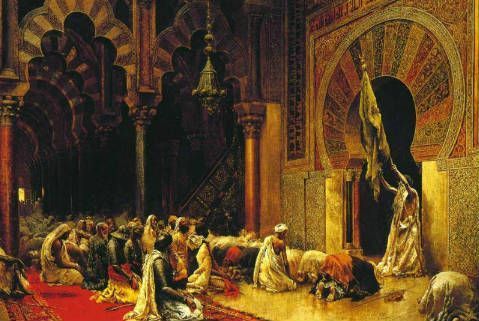 What is the Sacred Art?

Sacred art makes references to an artistic production whose purpose is to worship what is sacred or divine. A very common mistake is to confuse it with religious art. The difference between these two concepts is that sacred art, in addition to being religious, must have a liturgical purpose.

It does not have to be related only to the Christian religion, but sacred art has several variants, such as Buddhism or Islam among others.

For example, in Cordoba there is a double typology of sacred art: Muslim and Christian. Both can be seen in Cordoba's most important monument, the Mosque-Cathedral.

In the Islam, to make or to represent images is forbidden by the Koran since it is possible to commit idolatry, it is for that reason that, according to the Islamic, art it is only possible to decorate in three different forms: geometric, vegetable and with Koranic inscriptions.

Where can we see this sacred art?

Well, located in the most sacred part that the great mosque aljama had, and the point of reference for the Muslims for centuries when praying, the Mihrab.

When it comes to the Christian sacred art inside the Mosque-Cathedral is more extensive. Starting with all the pieces housed in the different chapels that border the perimeter, particularly two of them: the chapel of Santa Teresa, or better known as the chapel of Cardinal Salazar, and the chapel of the tabernacle. The first among the many pieces it has, the most outstanding, is the custody of the Corpus Christi, work by the German artisan Enrique de Arfe in the sixteenth century. The second, is distinguished by the magnificent frescoes sheltered inside, work of the Italian painter Cesare Arbasia in the sixteenth century.
Mosque of Cordoba Guided tour 24€ Book

Although the greatest concentration of pieces of sacred art can be seen in the treasure of the cathedral. The space is divided into two rooms with an exhibition of the most significant liturgical objects and sculptures of the treasure, such as the ivory Christ by Alonso Cano, the cross of Fitero by an anonymous author, or the sculpture of the archangel Saint Raphael by Damian de Castro.

However, outside the walls of the main building of Christianity in Cordoba, we can also find different elements of sacred art in the famous Fernandine churches, spread throughout the city, in the brotherhoods and their respective museums, and in the diocesan museum of Cordoba.

As far as events are concerned, we must highlight the holiday par excellence related to sacred art, the Holy Week. An intimate and overwhelming Holy Week that takes place every year in the city of the three cultures.

If you do not want to wait until next year, the Corpus Christi procession will be held on Sunday, June 3rd, where you will be able to see the aforementioned pyx in the streets of Cordoba.