Santa Cruz district: a walk through the soul of Seville - Oway Tours

Plaza de España in Seville: A walk through our country

Santa Cruz district: a walk through the soul of Seville 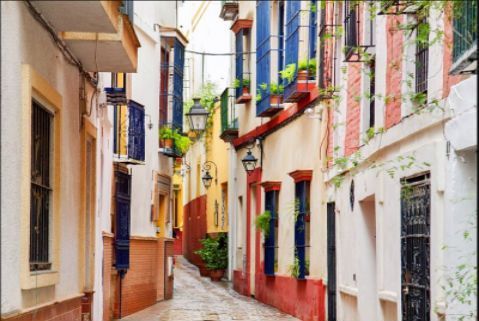 About Santa Cruz Neighbourhood in Seville

The DNA of this area is unequivocally Jewish, as the city was built in the times of Fernando III around the second largest Jewish community in Spain. So it is not surprising that walking through this neighbourhood, you can feel the echoes of the most Sephardic breath. But not only that, this part of his 'personality' is intermingled with the Sevillian hustle and bustle, its flowers, aromas and Christian fervour. A mixture that dazzles the traveller.

After the expulsion of the Jews in 1483, the area felt their depart until the Ibero-American Exhibition of 1929, when the neighbourhood underwent important reforms that today offer spectacular views of the Giralda. The literary history also maintains an idyll with this place, and Tirso de Molina chose this neighbourhood as the origin of Don Juan's love affairs.

Places of Interest in the Santa Cruz neighbourhood

The interest of the sites depends on where the traveller ends up after going aimlessly into a historic neighbourhood. However, there are some essential ones:

From the Giralda, this street leads to the heart of the neighbourhood. Houses-Palace. Seat of the brotherhood of the same name. The impressive faculties of Medicine and Letters...They are only some of the things that you will find strolling through this district.

A walled square offering direct access to the historic Alcazar.

Did you know that under the slabs of the temple that used to be there, now demolished, were the remains of Murillo? And today all that remains is a commemorative plaque, which serves as a tombstone, and why not? A place of pilgrimage for literature lovers.

Here it is rumoured that Don Juan Tenorio fell in love with Doña Inés...true or not, it is an essential square on your route.

A square surrounded by green, flowers and typical Sevillian houses. A place to rest and to abandon oneself to observe the slow -and happy- rhythm of the Sevillians.

What would Seville be without its Jewish essence? This neighbourhood, also called San Bartolomé, forms a labyrinth, not only of streets, but also of sensations when entering its historic walls. Today, marked with palace houses such as those of the Padilla family or Miguel de Mañana, it is a place that will not leave you indifferent.

- Other places of interest in the Jewish quarter: Church of San Nicolás - Church of Santa María la Blanca (built on a synagogue) and the Palace of Altamira.

You can't miss it either

The best way to visit this neighbourhood is to take a walk and let yourself be carried away, with no other intention than to soak up the soul of Seville. On the other hand, it may be interesting to take a guided tour through the neighbourhood and its convents or sit on a terrace and enjoy a beer accompanied by a fried fish, gazpacho or shrimp omelettes. As you will see, the history and essence of Seville is personified in the Santa Cruz neighbourhood, a mixture of sensations, history and unexpected corners.

Will you dare to explore Seville?