▷ Cordoba Tourist Bus: Everything you need to know

The Weather in Cádiz 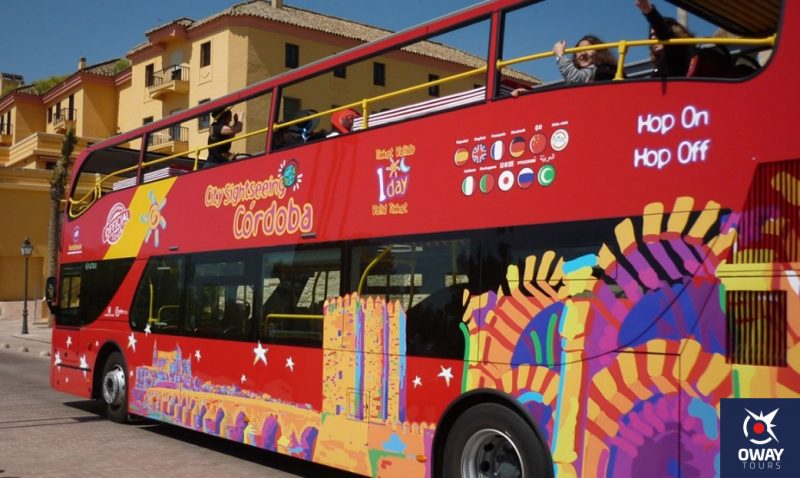 Opened in 2013 and today become one of the favorite tourist attractions of visitors, the Cordoba Tourist Bus is an original way to get to know the city in an easy, fun and in all the languages you can imagine. In addition, you will get an unlimited ticket, with which you can go up and down at the stops you want for a period of 24 hours. Interested in getting to know Cordoba aboard a stylish red bus of two heights? Well, read on and you’ll find all the information.

Currently two tourist routes are available: the Panoramic Route (marked in red) and the Córdoba Íntima Route (marked in blue). The red marked tour consists of 17 stops where you can tour the beautiful Cordoba with a 360o view. The blue tour will take place in a minibus, which will make 10 stops through the historic center of the city.

If you choose to make the first route, you will travel through the most built and central area of Cordoba, and you will be able to know the most inhabited part of the city. This tour offers a very complete “journey”, as it mixes the oldest places, such as the area of the Historic Center and the Jewish Quarter (where you will see the Mosque, the Roman Bridge and other typical monuments) and the most modern part, where we find office buildings, modern dining options, hospital infrastructures, large avenues, etc.

If you are looking for a quieter route and choose the second route, you will know the most intimate area of Cordoba, its Historic Center. Here you will find low-rise houses located in quiet streets, as well as the Town Hall (with its well-known Roman Temple) and the most representative monuments, the Alcázar of the Christian Kings, the Mosque-Cathedral, the Roman Bridge, the Arch of the Bridge… 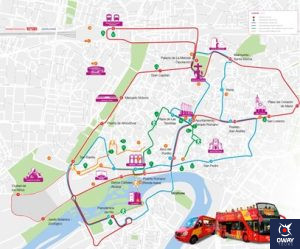 As mentioned above, the Panoramic Route consists of 17 stops where you can get on and off the bus as many times as you want. It is the most complete tour and will allow you to know the most modern part of the city of Cordoba. The stops included are as follows:

If you have less availability of schedule or what you are looking for is to know the oldest part of Cordoba, the Córdoba Íntima route will travel a total of 10 stops through the beautiful Historic Center:

And that is not all, as several guided walking tours are also available: the Axerquía Route and the Jewish Quarter Route, both carried out in English and Spanish for a duration of 60 minutes. 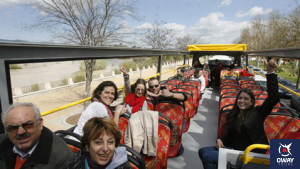 The arrival frequency of the bus is fast (taking into account that the tour is quite complete), so if you have a reduced schedule or have decided to descend and then go back up, the waiting time is maximum 1 hour (half an hour for the minibus of the blue route)

For walking routes, both will start at stop number 16 of the red line (Roman Bridge). The Axerquia Route will depart at 12:00 in the morning and the Jewish Route at 17:00 in the afternoon.

The tickets obtained last 24 hours, where you can get on and off the bus whenever you want. In addition, they are valid for a period of 12 months from the time of purchase and you can make use of them both in print and electronically on your phone. The Cordoba Tourist Bus is aimed at all types of public under the following rates:

In the event that you are not able to make the tour, they offer you the option to cancel the purchase and will refund your money if you cancel 24 hours before the purchase of the ticket.

And if you want to know the city in a quieter way, OwayTours offers you the best guided tours in Cordoba: