▷The Granada Tourist Train: Everything you need to know 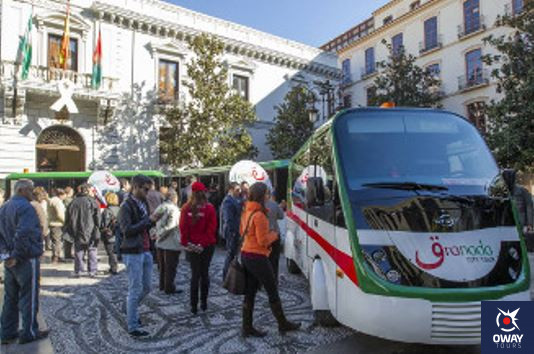 Information about the Granada Tourist Train

¨There is no city that without madness can dispute Granada / the palm of its beauty. ¨ – Victor Hugo. This is how the French poet described the essence of this Andalusian city. Granada has countless nooks and crannies to be discovered by those willing to walk its streets and soak up its culture.

The tourist train is a great opportunity for any traveller who doesn’t want to miss out on the city’s most important sights. This hybrid transport, designed to take you out into the narrow streets, offers its passengers a panoramic tour at only 25 km per hour. You can also add to this experience our Granada Tours to immerse yourself in the history of this impressive city.

This transport has two possible routes to choose from, day and night, which, although sharing several stops, guarantee totally different experiences for its customers.

The train is equipped with multimedia content screens accompanied by explanations of the different highlights of the tour that will make this experience an interactive journey that envelops passengers. Audioguides are available in Spanish, Catalan, German, Portuguese, English (USA), Japanese, French, Italian, Russian, Chinese, Arabic and Korean.

People with reduced mobility are welcome to enjoy this visit, as the train is equipped for this purpose. 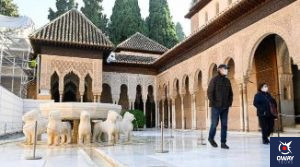 Starts at the Nasrid heritage, the Alhambra, the most visited World Heritage Site in Spain – Cuesta Gomérez – Plaza Nueva, the oldest square connecting historical sites and location of the central office of this service – Paseo de los Tristes, old passage to the cemetery  – Mirador de San Nicolás – San Miguel Bajo – Jardines del Triunfo, old cemetery and where Fray Leopoldo rests since 1956 – Monasterio de San jerónimo, from 1504 and first in the city and San Juan de Dios, formerly a Catholic hospital located in the monastery and now in disuse due to a robbery  – Plaza de la Romanilla, where the Cathedral is located, dating from 1505 – Calle Alhóndiga – Plaza de Mariana Pineda, near the Corte Inglés – Calle Molinos, where the Campo del Príncipe is located – and the Alhambra Palace Hotel, 100 metres from the Carmen de los Mártires, a tribute to the Christians held by the Arabs. 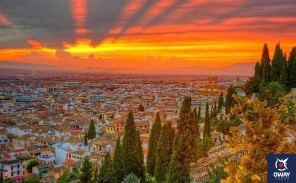 It starts at Plaza Nueva, where you can find historical landmarks and end the day enjoying bars and tea shops – followed by Paseo de los Tristes, location of bullfighting and canas events, where the nightlife is transformed during these festivities – Mirador de San Nicolás – Plaza de San Miguel Bajo – Jardines del Triunfo, where despite being a place where many Granadians lost their lives at the hands of the French, today it is immersed in gardens, fountains and architecture – Monasterio de San Jerónimo – Catedral de Granada, a Renaissance heritage that houses 181 years of history and which you can enter through our guided Tours of the Cathedral and the Royal Chapel – Calle Alhóndiga – ending at Plaza Mariana Pineda. 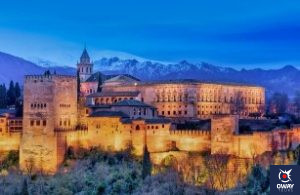 The adult price for a full day is 8 euros. During the trip, passengers can get off at the stops provided to tour the city’s historical landmarks, with the possibility of resuming the tour whenever they wish. There is also the possibility of travelling for two consecutive days for 12 euros. For over 65s, the price is reduced to 4 euros per day or 6 euros for those 2 days. For children under 8 years old and for those in possession of the Tourist Pass the service is free of charge.

From April to October on the night route, the timetable will be from 21:30 to 23:00, from Tuesday to Saturday, and from November to March, from 19:30 to 23:00, only Fridays and Saturdays. The train travels 4 kilometres for 40 minutes.

In addition, please consult the dates of public holidays due to a possible change in the timetable.

Take our Granada Free Tours with professionals who will accompany you on guided tours of the Sacromonte and Albaicin neighbourhoods.