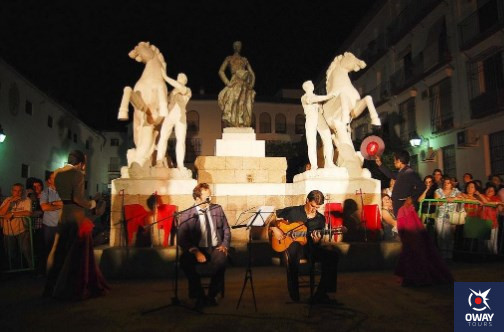 An unique and original event, which fills the city of Cordoba with chords and dance steps during a night in June is the one held during The White Night of Flamenco. The purest folklore of the region, along with gastronomy, theater and poetry combine to create this show that will makes you feel Andalusian art from its roots. Do you want to know more about the White Night of Flamenco? Well, read on to find out all the information.

The White Night of Flamenco emerged in 2008 as an initiative carried out by the city of Cordoba due to the search for the future designation of the city as “European Capital” in 2016.

Its first edition was held on June 21, 2008, reaching to participate in the event more than 577 artists who performed distributed throughout the city from ten in the evening to seven in the morning. In that first meeting, more than 200,000 people gathered, so it was considered a success and the starting gun at the beginning of a tradition that is already part of the city of Cordoba. 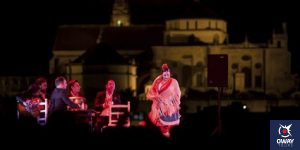 With the arrival of the second edition and due to the success of the first, the city council of Cordoba decided to increase the number of contracts, thus expanding to 100 more that provoked the attention of 250,000 spectators. In this way, year after year the festival has managed to become a claim, thus getting even people from different parts of Spain to come to Cordoba to enjoy the show.

Renowned artists such as José Mercé, Estrella Morente, Miguel Poveda, Rosario Flores or even Rosalía are some of the artists who have performed on this special night, many of them being regulars in each edition that is celebrated.

The White Night of Flamenco is a music and dance festival held in the city of Cordoba during one night of the last week of June. It is considered as a great cultural event that is also unique in the world, because it achieves that different artists, each with their style and trajectory, act distributed throughout different parts of the municipality, thus creating an atmosphere of macrofestival that floods the streets of Cordoba with culture, art and Andalusian joy.

With this, the city has become one of the first to organize this type of festival, capable of bringing together artists of great stature to make the public enjoy the passion they feel for Flamenco. In addition, Cordoba is the perfect space to welcome it, since it is one of the cities with the most Flamenco history in the world, along with places such as Granada, Jerez, Seville or Malaga.

The festival is held every year on a night in late June. However, they do not usually coincide the same days each year, since you try to choose the last friday of the month to host it. What does remain stable are the hours, because it usually begins at approximately ten o’clock at night and ends around seven in the morning.

At the beginning of the year, the City Council of Cordoba begins to plan the festival, hiring the artists and carrying out a program that distributes them throughout different parts of the city. In this way, you will find shows in areas such as: the Bullring, the Tendillas square, the la Corredera square, the Victoria avenue, the Santa Marina square, the Patio de los Naranjos, the Bridge Gate, the Compass of San Francisco, the Patio de San Basilio, the Youth Square , the Potro square, the Calahorra Tower and a long etcetera. Therefore, it is advisable to consult the poster that is published a few days before on the official website so that you do not miss any.

With the beginning of the festival, different informative brochures are distributed where the interested party can organize the shows to which they will go. Normally it is tried that the most renowned artists do not coincide in hours so that all the performances can be enjoyed without problem. 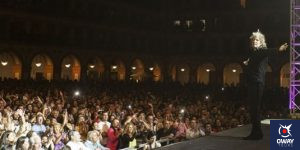 The programming is different depending on the year, so if you have come in one edition and want to go to another, we recommend that you consult the informative posters.

The year 2019 was considered one of the most epic nights in the history of La Noche Blanca del Flamenco, as the City Council managed to bring one of the international artists of the moment, Rosalía. This filled the Plaza de Toros de Córdoba completely, even having to organize an advance sale weeks before where from early in the morning, forming a long queue at the door of the square to get free admission. That year artists such as Remedios Amaya or María Terremoto, among others, also performed. 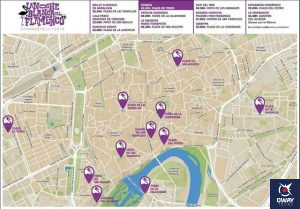 And if you want to enjoy a complete experience in Cordoba, don’t miss the best guided tours with Oway Tours: