Tickets for the Mosque-Cathedral 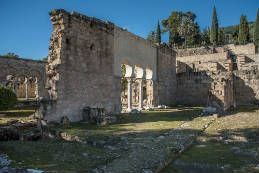 Another of the main attractions of the city is the Archaeological Site of Medina Al-Zahra. The remains of what was one of the most impressive Palatal-cities of Europe. Built by the first Umayyad Caliph of Al-Andalus, Abd al-Rahman III, who wanted to show everyone through this city the power of his dynasty. A selection of the richest materials were used on it construction, in order to surprise the ambassadors of distant empires of the Middle Ages who came to Medina Al-Zahra to face with the leader of Al-Andalus. Today after a great recovery work the medieval city has become the country's largest archaeological rest of the Arab Empire.

Medina Azahara is located 8 km east of Córdoba at Sierra Morena Hills. To visit it, it is necessary a vehicle. If you have your own vehicle, take the A-432 road that goes to Palma del Río. This road gets from Ronda de Poniente. About 4 kilometres to the right you will find the exit to Medina Azahara. If you do not have your own vehicle there is a bus that will take you to the City. The meeting point is at the Bus stops on the Paseo de la Victoria (next to Red Cross Hospital and to the Hotel Cordoba Palacio) and at Paseo de la Victoria Avenue (in front of the Victoria Market). You can check schedules at the touristic Offices.
Visitor Reception Centre - Visitors Centre
Tourist Information Point in the Train Station RENFE-AVE
Tourist Information Point in Plaza de las Tendillas
Cordoba Tourism Office reserves Central

Once at the visitor centre enjoy the great museum of Medina Azahara, which you shouldn´t miss. As well, the video projected on the audio-visual room, which will rebuild the original image of the medieval city, helping you to understand the city. After visiting this area a shuttle will bring you to the beginning of the city to start your visit.

At the end the same buses will bring you back to Córdoba. Total price of the visit with the entry and transport is 8 euros.
Compartir
0