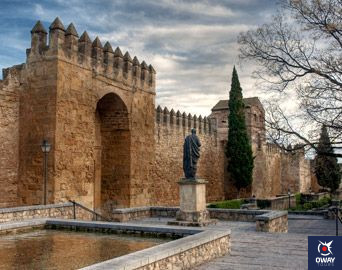 The Walls of Cordoba have a long history, as long as the history of the city itself. Situated along the perimeter of its old historic quarter, they offer a series of monuments of great tourist and cultural importance.

However, these Walls have been protected for centuries by Romans, Arabs and Christians, which is reflected in the contrast of cultures for which the city is characterised.

Then, in the middle of the 19th century, the Walls lost their usefulness both in their military function and as a customs office, for example, to impose taxes on goods entering the city.

From that time on, both the Wall and the Gates were progressively destroyed due to their deterioration over time. In the meantime, most of the city’s inhabitants defended the heritage that was gradually being lost.

If you want to discover more about this city full of culture and history, at Oway Tours we have the best tours about Cordoba.

But there are traces that time has not erased, that let us see through a series of sections the strategic enclaves that the city possessed during its history. These are summarised in a series of walls that surround the old part of the city. We can summarise them by highlighting:

This is a small open gate that was left inside the city in the 14th century. It closed off the Medina and separated it from the Axerquia along what are today the streets of Alfaros and Feria. Remains of the wall can still be seen inside the Palace of the Marquises of Carpio. 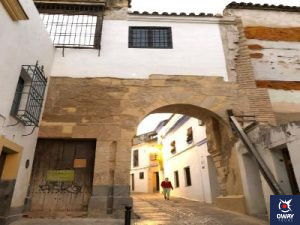 This is the slope that connects Calle Ambrosio de Morales with Calle de San Fernando. Its purpose was to make it much easier to communicate the two parts of the city: the Villa and the Axerquía. The plaque commemorating this opening can still be admired on the east wall, at the top of the slope. 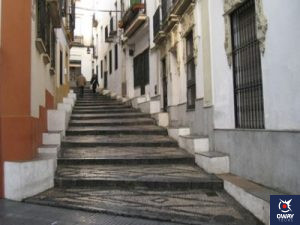 This was one of the entrances to the wall that connected the Axerquia with the Medina. From this well known street you reach the Plaza de Capuchinos, presided over by the famous Cristo de los Faroles (Christ of the Lanterns). At the end of this square is the Casa del Bailío, with a beautiful Renaissance façade. This Christ is known to be the most venerated sculpture and one of the most mysterious places in the city. If you are interested in knowing more about the secrets about Cordoba; visit the following post. 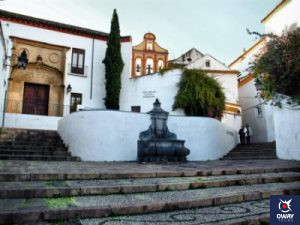 It belongs to a part of the wall that surrounded what was once called the Castillo de la Judería (Jewish quarter castle) and later Corral de los Ballesteros. It is a gateway in a bend, a typical Muslim defensive system for its gates. The Roman wall ran through this enclave, and after the expansion of the city towards the river, the Muslim wall. 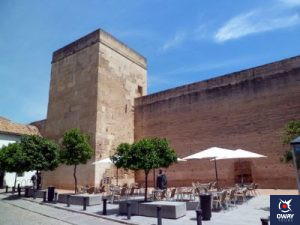 This is a fortress of Islamic origin designed as a protective gateway to the city. It stands on the south side of the river and at one end of the Roman Bridge. This tower was declared a historic-artistic monument in 1931. It was later ceded to the Institute for the Dialogue of Cultures, which has installed an audiovisual museum.

For more information about the Roman Bridge and the Calahorra Tower, we recommend you visit our guide to the monuments of Cordoba. 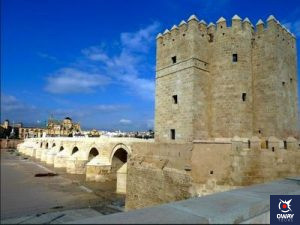 Built during the reign of King Henry II, in the second half of the 14th century, they protected the neighbourhood from the floods of the river. One of the most outstanding resources in this area is the Guadalcabrillas Tower. 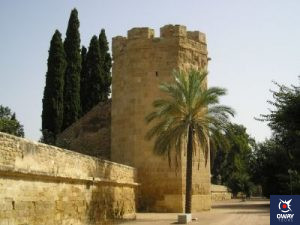 They are of rammed earth origin, as the city, even in the Caliphate period, was surrounded only by a moat. The Almoravids built this part of the wall in the 12th century. It has undergone a series of restorations throughout history for its conservation. 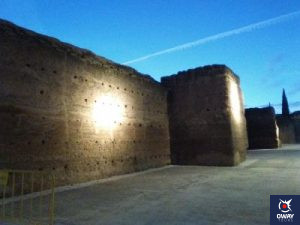 Gates of the Medina

A watchtower to defend the two free parts of the wall from one corner. It was built between 1404-1408. Next to it is a small wall panel. 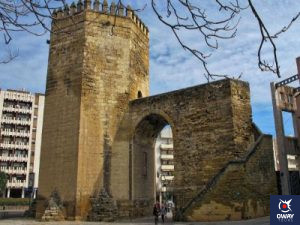 It was located just at the end of Puerta del Rincón street, and the Puerta del Rincón tower still survives today. The gate was demolished in 1852, but this area has recently been restored. In 2002, an emergency archaeological intervention was carried out. 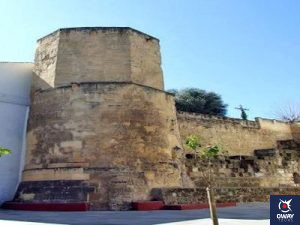 It is currently located near the bridge of San Rafael, at the end of Avenida Conde de Vallecano. Its beginnings are known from the creation of the district of San Basilio and the consequent extension of the city and the wall to the west, which made it necessary to build a new gate for the city. 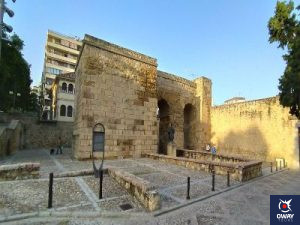 Built in the 16th century in Renaissance style to commemorate the celebration of the Cortes of Philip II in the city, the current gate is located in an enclave where Roman gates were once located, linking the city with the Roman bridge and Via Augusta.

Since 1931, the gate, together with the Roman bridge and the tower of Calahorra, has been declared an Asset of Cultural Interest in the category of monument. It also belongs to the historic centre of Cordoba, declared a World Heritage Site. 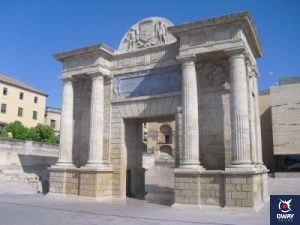 Built in the 14th century over a gate of Arab origin, it is one of the best-preserved gates in the city walls today. It is located in a very central area of the city, next to the Red Cross hospital and the Jewish Street, one of the most popular streets in the Jewish quarter.

On the outside of the wall there are gardens with a statue of the Cordovan philosopher Seneca.

For more information about Monumental Cordoba, we recommend you visit our Tour of the Alcazar, the Jewish Quarter and the Mosque. 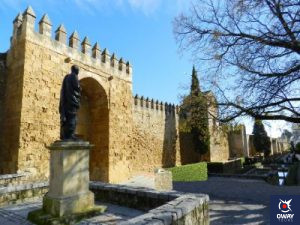 Routes to visit the Gates and Walls of Cordoba

In order to establish a route to visit the Gates and Walls of Cordoba, we differentiate, first of all, three routes, where we divide the route into the Medina-Villa, the Axerquia and the Old Alcazar. After this division, we will now highlight the main gates and walls that can be visited: