What to visit in Córdoba? 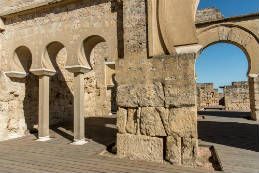 Planning coming to Cordova? Or maybe already here and you don´t know what you should visit or where to start? We are going to suggest you some tricks. Start for example visiting the historical centre of Cordova, which has been declared by UNESCO as Worldwide Heritage Site, it is one of the biggest Old Historical centres in whole Europe.

Once you are inside, you will find the footprints of different civilizations and cultures that lived in the city since Roman times, during the Visigoth, Arab and Christian domination. Temples dedicated to gods; we have many of them in Cordova of every culture. Beginning with all those built for the adoration of the Roman Emperors and Roman Gods like the one placed on Claudio Marcelo St, or the Wonderful Mosque, symbol of the splendour of the Umayyad Caliphate of Cordova where centuries later the great Cathedral of Cordova was built right in the heart of the Muslim temple.

An important piece of this Worldwide Heritage of Cordova belongs to the Jews Quarter. This old neighbourhood will show you the most authentic face of the Shepherds who lived in Spain at those times.

Inside the Jewish neighbourhood, you will find the Synagogue of Cordova, one of the best preserved Synagogues of the medieval era. The neighbourhood is opened every day by the most brilliant mind of the Jewish culture at that time: Maimonides, who will share his knowledge with those whom touch his feet.

However, the city has much more to offer; inside the walls of Cordova, a huge among of treasures is hidden. If you walk by the Guadalquivir side, you will contemplate the roman footprints again in one of the biggest bridges built on that era, the great Roman Bridge. This is protected by the Calahorra Tower. Made by the Arabs, it was created as the last barrier to control the entry to Cordova just before crossing the Roman Bridge which connected with the South gate. This access to the Roman city is also well known in nowadays as the Triumph Arch. Close to it and following the Guadalquivir, there is a great fortress with many stories inside its walls. It has protected the entry to the city for centuries and then, hundreds years later, it was transformed into a Christian Palace where the Catholic Monarchs Isabel and Ferdinand spent part of their life.

Across the narrow and tiny streets decorated with flower pots and flowers, an uncountable quantity of Squares will appear surprising you. Some of them are Main Squares such as Tendillas Square and Corredera Square. Others, like Pony Square you´ll find museums like the one dedicated to our painter Julio Romero de Torres, and The Capuchinos Square will show you the most magical and mysterious side of the city of Cordoba.

Outside the walls but very close to the city, you will find Medina Al-Zahra and the Castle of Almodóvar, treasures that you have to see if you want to be impressed. Finally, do not forget to visit the Patios of Cordova, and meet their owners and neighbours in St Basilio, St Agustin, St Lorenzo or St Marina neighbourhoods, historical and traditional ones. Are you missing them?
Compartir
0