➤What to see in Granada in two days | OWAY Tours

What to do on a weekend in Seville?

What to see in Granada in two days 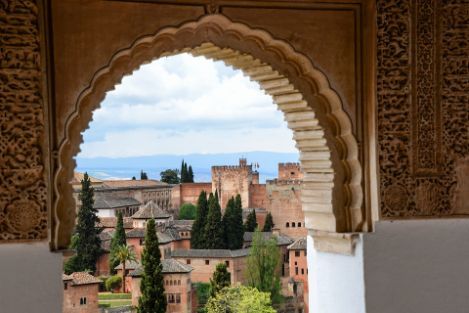 Visiting Granada on a weekend without missing anything is a complete challenge, but nothing is impossible for professional travellers like us! The trick is to choose the perfect moments to enjoy your plans. Here we go!

What to see and do during the day

Granada is a very sunny city and the morning murmur will delight you. Wake up early (remember: the earlier the better), put on comfortable shoes and get ready for a very cultural morning.

The Alhambra and its surroundings

The Alhambra in Granada is considered one of the wonders of the world and millions of people from all over the world come to visit it. So you’re not going to lose it, are you? We recommend you to book your tickets well in advance and arrive early to avoid queues. Once inside, wake up all your senses and enjoy this magnificent Andalusian work.

The Alhambra is a monumental complex built over an Andalusian city-palace. It consists of the old palaces, the Generalife, gardens and the Alcazaba, an area of military control designed to house the Emir and the court of the Nasrid Kingdom. You can visit everything with your ticket and the Alhambra also has free public access to the Palace of Charles V with the Museum of Fine Arts and the Museum of the Alhambra.

Located very close to the Alhambra, these gardens founded by Queen Elizabeth the Catholic will make you think you are in Versailles itself. Walk through them and enjoy the colours and smells. The Carmen de los Mártires Gardens are a very romantic setting and if you don’t believe us, take a walk through them and see all the couples holding hands or doing wedding photo shots.

What to see and do in the afternoon

After a cultural and busy morning, we recommend some more relaxed plans to walk and enjoy the most curious corners of Granada.

La Calderería will transport you to the Moorish medina. It is the old Arab souk where you can buy ceramics, coloured lamps and other Moroccan and Grenadian handicraft objects, as well as practise the art of haggling!

You can stop for a snack in one of its many Andalusian tea shops, drink an aromatic tea and try the delicious Arab cakes.

The Albaicin quarter, declared a World Heritage Site by UNESCO, will captivate you with its narrow streets. Walk through them, look for hidden monuments and enter its small churches.

It is the purest and most traditional neighbourhood in Granada. Sacromonte has always been considered the gypsy quarter, among other things, because of its flamenco and its cave houses. A very curious walk that you must do to see with your own eyes the deep culture of Granada.

What to see and do at night

Enjoy a show in the heart of flamenco in Granada! In the caves of Sacromonte they celebrate zambras (flamenco shows) at night. It’s an experience you can’t miss!

What to see and do during the day

Cathedral of Granada and Royal Chapel

The Cathedral of Granada was built in the 16th century by order of Isabel the Catholic. This cathedral, also known as the Catedral de la Encarnación (Cathedral of the Incarnation), has impressive facades and a magnificent interior with a wonderful altarpiece.

Visit also the Royal Chapel, attached to the Cathedral. It was founded by the Catholic Kings and houses the tombs of Juana la Loca and her husband, Felipe el Hermoso.

Granada is nothing without its bars. Plaza Nueva is surrounded by a multitude of streets that are a cheap, Granada tapas area. In Granada, tapas are bigger than in the rest of Andalusia and your pocket will appreciate it!

In Plaza Nueva you will find the Real Chancillería (Royal Chancery) with its Mannerist façade. Close to it you will be able to walk around the Plaza de Santa Ana and Doña Elvira street, with its 11th century doorway to the Medina. If you continue to walk around the area you will discover the Triumph Gardens and the Royal Hospital in Gothic, Renaissance and Mudejar style. Don’t get stressed out! In the centre of Granada everything is just a short walk away.

What to see and do in the afternoon

Bill Clinton said after visiting Grenada, “Grenada, the most beautiful sunset in the world”. And what could be better than to see the sun fall over Granada as you walk along the Paseo de los Tristes to the Mirador de San Nicolas? Nothing! It’s a steep walk that can be long, but we assure you it will be worth it – the Alhambra will seem to shine itself!

What to see and do at night

Granada is a bohemian, sweet and romantic city. Besides, it is a very university city so it has many bars and pubs to enjoy at night.

After seeing the Alhambra lit up, you can stay for a drink on the descent of the Paseo de los Tristes. It’s a quiet area with a nightlife atmosphere of pubs and terrace bars where you can enjoy the wonderful views. Very romantic!

Granada is the city of the most peculiar bars. The area of Doña Elvira Street, Reyes Católicos, the Paseo de los Tristes or Pedro Antonio de Alarcón are key areas where you can find the most diverse plans. From tapas areas to bars, pubs, live music places and discos, there’s a plan for every taste!

Some of our favorite bars are La Guarida del Lobo, for the more metalheaded; the Chupitería 69, with more than 100 different shots; and the Wall Street Pub, where the prices of drinks are a bargain! Yes, exactly what you hear, the price of drinks and beers varies according to demand, so you’d better watch out for the price drop of your favorite drink and become the real wolf of Wall Street.