All the information about The Monument to the Courts of Cadiz

Monument to the Courts of Cadiz

Located in the Plaza de España, the Monument to the Courts of Cadiz or Monument to the Constitution of 1812 commemorates the centenary of the 1812 Constitution in Spain. If you are visiting the city of Cadiz and are interested in learning about its history to better understand the monuments, buildings, and places you will find there, this is your article. 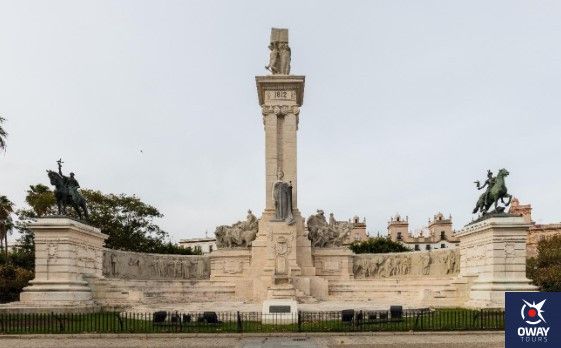 History of the Monument to the Courts of Cadiz

The project was carried out by the architect Modesto López Otero and the sculptor Aniceto Marina in 1912, representing different allegories that allude to War, Peace, Agriculture and Industry, as well as reliefs that show Cadiz resistance during the War of Independence between 1808 and 1814, developed within the context of the Napoleonic wars that pitted the allied powers of Spain, the United Kingdom and Portugal against the First French Empire, which was trying to install Napoleon’s brother, José Bonaparte, on the throne.

Its construction was requested by the Cadiz Municipality to the National Congress a century before it was carried out between 1912 and 1929, specifically on March 27, 1812. The request was approved by the Cortes the next day, and the Cadiz City Council called for a tender for different projects in April of the same year. However, due to the political and economic instability caused by the various wars, it was not until 100 years later that the project could be carried out. 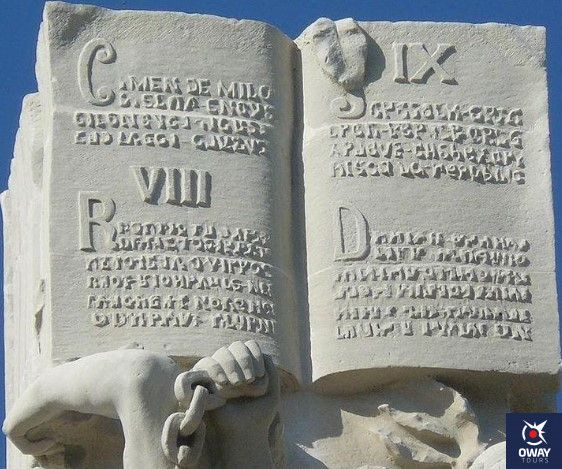 In 1910 the Provincial Commission of Monuments and the Royal Hispano-American Academy of Cadiz demanded that the government comply with the stipulations, so a new contest was called in Madrid in 1911, which required for its presentation that the execution be by an architect and a sculptor associated. Finally, the competition was won by the architect Modesto López Otero and the sculptor Aniceto Marinas García. To get the necessary inspiration for the realization of the monument both read the Constitution several times, as it is stated in the magazine “Raza” in 1919.

This work commemorates the Constitution of 1812, or popularly known as La Pepa, which was promulgated by the Spanish Courts gathered in an extraordinary act in the city of Cadiz. This event is of great historical importance as it is the first Constitution to be promulgated in the history of the Spanish people and, moreover, proposed some very liberal ideas for its time. Unfortunately, the 1812 Constitution was only in force for two years, as it was repealed in Valencia on 4 May 1814 after the return of Fernando VII to Spain.

It was not until March 8, 1820 that the Constitution was applied again, since in Madrid Ferdinand VII was obliged to swear it in, and it remained in force throughout the Liberal Triennium (1820-1823), and also later for a brief period between 1836 and 1837 under the progressive government that was preparing the 1837 Constitution. This first Constitution finally established sovereignty in the Nation by turning its back on the absolutist monarchy, and bringing with it a constitutional monarchy – which limited the powers of the king – the separation of the executive, legislative and judicial powers, universal male suffrage, freedom of the press, of industry, the right to property or the abolition of the lordships, among many other issues.

Regarding the monument, we can see that it is a large, hemicycle-shaped set facing the dock, trying to emulate a monumental gateway to the city from the sea and, at the same time, a visual metaphor of the Legislative Chamber. Its structure is formed from a lower plane, with the hemicycle and an empty presidential chair, and numerous inscriptions that mark the upper part. On both arms there are equestrian statues made of bronze that are allegories of Peace and War. In the centre of the monumental complex a large pilaster rises grandiosely above the rest of the bodies, ending in a group of allegorical figures that support the constitutional text. At the foot of the pilaster appears the figure of a matron, symbolizing the Spanish nation and, on both sides, sculptural groups alluding to Agriculture and Citizenship. Finally, behind them appears the figure of Hercules, as well as the names of the most outstanding members of parliament who contributed to the creation of La Pepa.

Timetable for visiting the Monument to the Courts of Cadiz

The monument is in the Plaza de España in Cadiz, an open space, so it can be contemplated without any time limit. 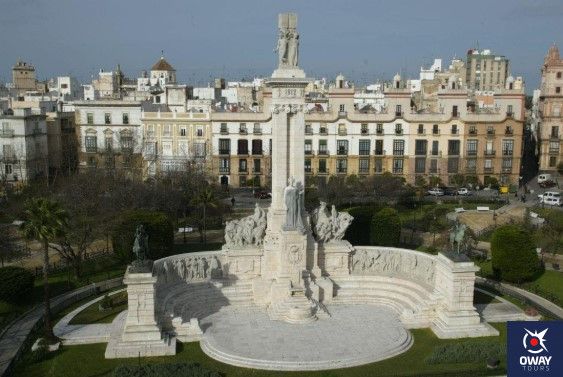 How to get to the Monument to the Courts of Cadiz

Getting to the Plaza de España is very easy, as it is in the heart of the historic centre of the city of Cadiz. If you use public transport, there are several ways to get there. By bus, there are several lines that go through there: the M-040, M-041, M-061 and, by train, the C1 and MD, while, on the other hand, if we choose the ferry as a means of transport, we can take the B-042 and the B-065. 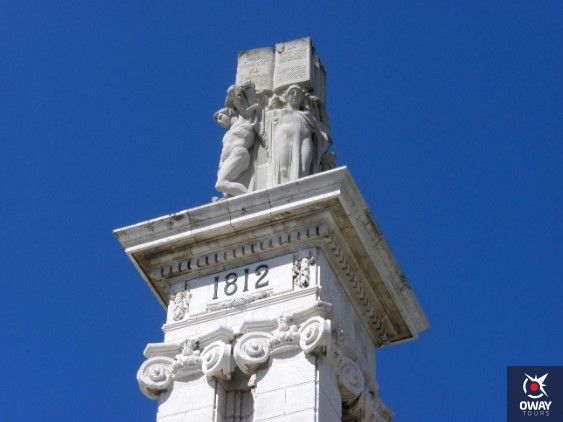 Curiosities about the Monument to the Courts of Cadiz

After the development of this square, others with monuments inserted in them proliferated all over the American continent. After the return of Fernando VII and with him, from absolutism after the collapse of the Liberal Triennium in 1814, most of these squares and monuments were destroyed in retaliation. This situation, together with the independence of Latin America, brought about a change in the meaning of many of them, as in the case of the Plaza de la Constitución in Mexico City, which today is a reminder of the Mexican Constitution of 1917, but was originally created to celebrate the Cadiz Constitution of 1812. Nowadays there are still some examples in Montevideo, with the Plaza Matriz in Florida, with San Agustín, or the Monument to the Constitution of 1812 in Comayagua, Honduras. 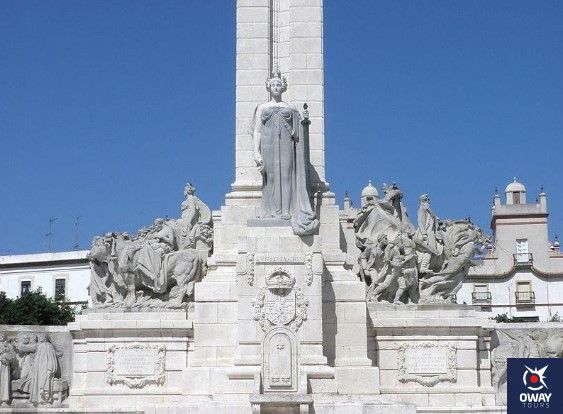 There were two main reasons for choosing the city of Cadiz as the seat of the Courts: the first was of a strategic nature, thanks to the city’s privileged position and its imposing walls, which made it practically inaccessible; the second reason was ideological, and was due to the liberal atmosphere that prevailed in this city. The great difficulty in besieging the city meant that the French army, after unsuccessful attacks since 1810, finally had to withdraw on 24 August 1812, when the Constitution, one of the most important chapters of the Spanish Modern Age, was developed.

The central figure, a marble sculpture that presides over the monument and is undoubtedly the most striking of all, is a midwife dressed in a long tunic and, thanks to her attributes, we can see that she is a symbol of the Constitution, which is further enhanced by the written law, which appears in her right hand, and a sword in her left hand. On the chest of his tunic appears the coat of arms of the Spanish nation, his hair is gathered and covered by a helmet, which is topped by a figure similar to the one that crowns the top of the monument, symbol of power and justice. We can affirm the Greco-Roman heritage of this sculpture, as its appearance is very similar to that of the goddess Athena or Minerva, traditionally considered to be the goddess of Justice and Wisdom.