If something characterizes Cadiz is its proximity to the sea. In this sense, it is mandatory to approach the coast when visiting the city. One of its most famous beaches is the Caleta. This natural space is protected by two castles on both sides, Santa Catalina and San Sebastian. It is a delight to make the walk while you contemplate one of the great monuments of Cadiz which gives the town its curious shape from the aerial shot. In addition, San Sebastian Castle has a great story that makes it the perfect film set that you can’t miss.

Although there are no archaeological remains, historical sources indicate that a temple dedicated to Moloch/Kronos was located on this island during the Phoenician era. Strabo said that the city was located in the western part of the island. Let us remember that the natural space suffered a sedimentation that turned it into a peninsula. However, no material evidence has been found for this building. What can be documented is that the beginnings of the castle date back to the 15th century. In 1457 a Venetian ship arrived at the Cadiz coast whose passengers were sick with the plague. Since it was impossible for them to access the beach, they stayed on the islet where, from the remains of a Muslim lighthouse, they built a chapel dedicated to San Sebastian. It would not undergo many modifications except that in 1613 a watchtower was built with a double function: defensive and signaling for sailors. During the 18th century the construction of the current defensive structure began. Cadiz was an enclave that was gaining power and through which riches were arriving so it was decided to reinforce security. To do this, work was carried out to install a perimeter moat, allowing access only by drawbridges, and a wall covering all the parts not protected by the natural rock. More defensive elements were added every few years so that we cannot know when the reforms were completed. By 1739, the castle controlled the southern area of the city and the entrance of ships through La Caleta with 17 cannons for this purpose. Over time, it began to lose its former function until, with the arrival of the 19th century, it was rehabilitated to become a prison. For this purpose, in 1860, a much more solid and resistant fortification was built with casemated batteries acting as a seawall. The last modifications date from 1908 when Rafael de la Cerda designed, based on the old medieval lighthouse, a crane structure to serve as a lighthouse again. In 1985 it was declared an Asset of Cultural Interest in 1985 and today it serves as an exhibition space or for recreational events. 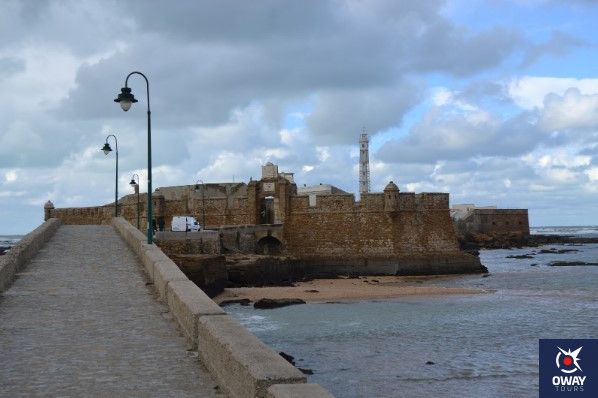 San Sebastian Castle is located on Avenida Duque de Nájera, s/n, at one end of Caleta beach. The best option to get there is to go on foot or, you can also make the journey by bicycle since as we get closer we can contemplate its silhouette reflected on the sea. It can be visited all year round from Tuesday to Sunday from 11:00 to 19:30 and entrance is free. There are not exactly any rooms that can be visited, because there is also a part of the building that is quite deteriorated, but it is worthwhile to walk around it. As we go through it, it is possible to have a panoramic view of the city of Cadiz with a quite singular perspective.

The lighthouse that crowns the castle measures 41 meters, was the second to be completely electric and the first to have a metal structure. Today it is possible to see it illuminated as it still maintains its functions. In addition to its more practical and tourist mission, the Castle has also been used to shoot films. Thus one of the great Spanish blockbusters, Captain Alatriste, made his appearance here during 2005. It also allowed Halle Berry to swim in the sea in one of the most famous scenes of the saga of the mythical agent 007. When James Bond and Jinx Johnson were in Cuba on “Die Another Day”, Pierce Brosnan and Halle Berry were actually in the municipality of Cadiz. Although the Castle has also been the scene of many darker moments in the history of Cadiz. As a prison during the 19th century and because of its refugee status, this emblematic space was chosen to end the lives of 42 people during Franco’s repression. 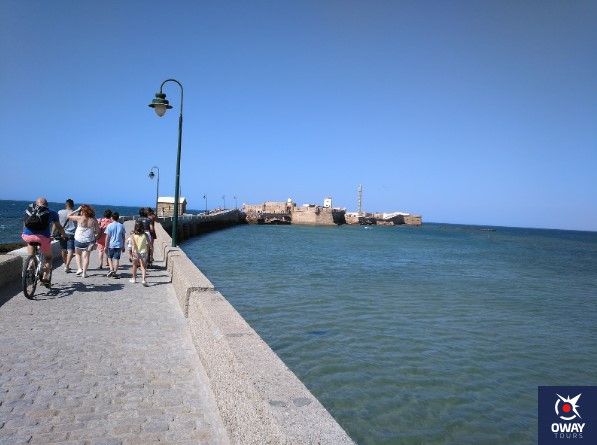