All the information about the Cadiz Cathedral | OWAY Tours

The Cathedral of Cadiz is called “Santa Cruz sobre el mar” or “Santa Cruz sobre las aguas“, although the truth is that in the city it is better known as the New Cathedral, as opposed to the old one from the 16th century over the old Gothic Cathedral ordered by Alfonso X The Wise. The primitive Gothic was burned down by the Anglo-Dutch squad in 1596. And at the beginning of the 17th century, a cathedral was built on the remains, with a dignity in accordance with the condition of being the first temple of the diocese. The growth of the city and its prosperity with the commerce of the Indies in the second half of the 17th century motivated the construction of a new cathedral in accordance with the splendor of the city. 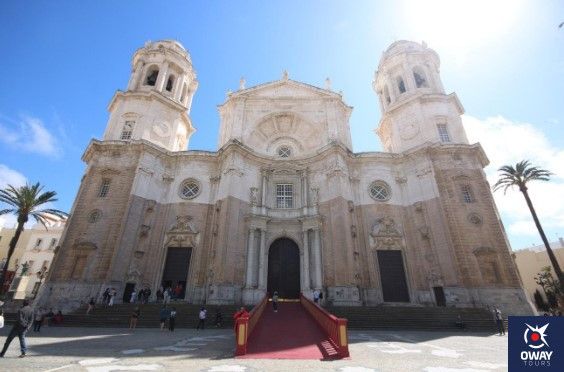 The new cathedral of Cadiz responds to a very different orientation to the one that had the old five-star building, it is the desire that the new structure was perceived from the direction of the entrance of the ships to the port of Cadiz, and even that the height of the dome and towers were originally designed to rival the height of the three-masted sailing ships that came from America. This 18th century reality was not all that was desired, as this is one of the most abandoned modern cathedrals from a historiographic point of view. Its front was modified from the second body, its towers were reduced in height, the dome was finally smaller, and this gave way to a neoclassical half closed in 1844.

The Cathedral of Cadiz had emerged with the aim of being a representative building of the Spanish architectural culture of the day. Its architect, Vicente de Acero, was chosen in a competition in October 1721, recommending the cathedral’s wooden construction to the cathedral’s chapter, given the knowledge he possessed. In these first years, the building’s factory already presented problems. After the criticisms that arose around the building and its head of works, Acero said goodbye to the factory in 1739, and continued with the work of Gaspar Cayón, Miguel Olivares, Manuel Machuca, and was finished by Juan Daura.

It was 116 years of construction that gave rise to countless changes in style and tastes by different architects. The cathedral began in Baroque style, as its plant and the interior until the rococo frieze and is finished in neoclassical style, in its facade, towers, domes and the second body of the interior, as well as most of the altarpieces and the main altar. In short, a very different image to the one that was intended at the beginning of the construction.

Inside we find a floor plan in the form of a Latin cross, divided into three naves and with a pentagonal ambulatory. It has rows of Corinthian columns that support vaults, except for the top of the dome of the ambulatory. The altar is raised in height, and under it is the crypt that was the first enclosure built in the cathedral. The chapels are repeated around the naves of the Cathedral, and the one of San Sebastián with the sculpture of Luisa Roldán stands out, as well as that of the Cadiz patron saints of San Servando and San Germán. In the choir we find two large organs of great value. 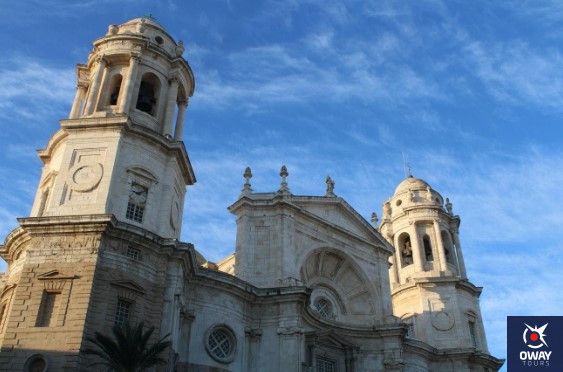 Schedule to visit the Cathedral of Cadiz

If you are in Cádiz, a visit to the cathedral is a must. You will be seduced by its subtle exterior forms that connect perfectly with the sea in the background. This imposing Catholic temple dating from the 18th and 19th centuries can be visited from Monday to Saturday from 10am to 6.30pm, and on Sundays from 1.30pm to 6.30pm. On public holidays the opening hours are from 10.00 to 14.00.

The general entrance fee to the cathedral, the cathedral museum and the clock tower is 5 € for adults, 2.50 € for schools and children, 3 € for groups and students, and 4 € for pensioners. The price includes an audio guide so that we do not miss any of the details inside the cathedral.

How to get to The Cathedral of Cádiz

The cathedral, like many others, is located in the centre of the city of Cadiz, specifically in the historic centre. Close to the sea, and because of its dimensions, visible from all points of the city. To get there we recommend a walk along the coast, although the bus and train stations are not far from the monument. The line 7 of the urban transport is the one that leaves us more next to its facilities. 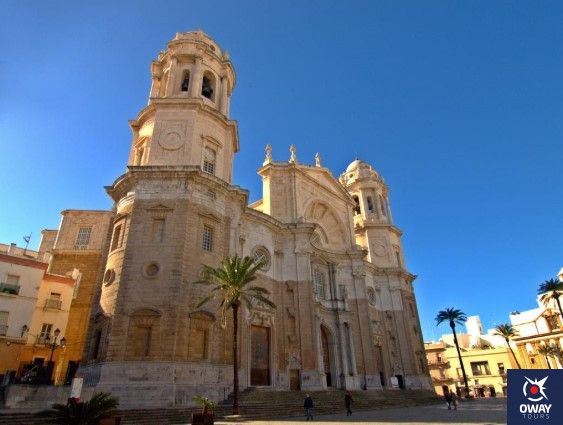 Curiosities about The Cathedral of Cádiz

The cathedral of Cadiz was under construction for many years, passing through different stonemasons. This long period of construction and the proximity to the sea, have caused many of the stones used to crumble. It is also curious the different colour of the facades, due to the alternation between limestone and oyster stone, while in the interiors the king of materials, marble, is used.

The Clock Tower is one of the most characteristic elements of the cathedral, and from it you can see the whole city and the Atlantic Ocean. The clock stands out, which was introduced to the tower in the 19th century and which for decades served to mark the time of the people of Cádiz, until it fell into disuse in the mid-20th century. 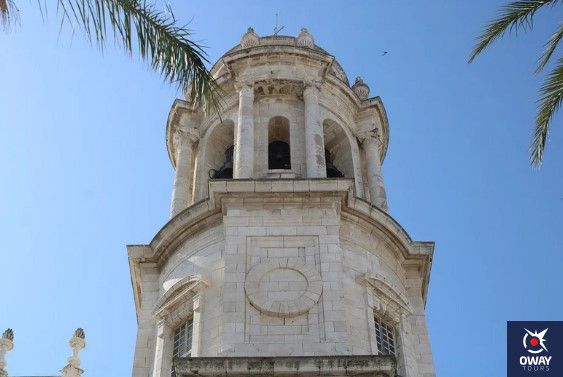 Despite being one of the unique elements of this building, it is in poor condition. It was restored with the replacement of glazed tiles that simulated the old ceramic, but shortly afterwards damage began to appear, although it did not cause leaks. Aesthetically, it appears to be painted with a resin that imitates the peach-coloured effect of the lost glass.

It is one of the components to be upgraded and which would restore the golden gleam it once enjoyed, although for the moment the restoration option is ruled out, as the scaffolding required would be very complex to install. 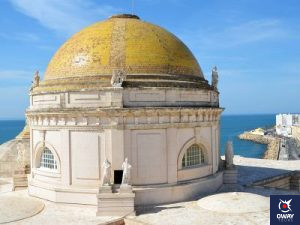