All the Information about Tavira Tower | OwayTours.com

Located in the historic center of Cadiz we find the Tavira Tower, which with 45 meters above sea level boasts of being the highest viewpoint of the city of Cadiz. The breathtaking views that it throws from the Costa de la Luz is something you can’t miss, dare you see Cadiz from above? Well, here you will find all the information about Tavira Tower.

In the eighteenth century, Cadiz enjoyed being one of the cities with the best commercial and port activity, since the beginning of the century it owned the commercial monopoly with the Indies. That is why it currently has 126 watchtowers, including the Tavira Tower.

It was built in 1730, forming part of a palace house called Casa-Palacio de los Marqueses de Recaño, although its function was always to be a lookout tower. Due to its 45 meters high, it soon was named as the official tower for the surveillance of the city.

In 1787 the palace house lost its residential function, and the free School of Drawing, Arithmetic and Geometry was installed there. Years later new trades were incorporated such as the School of Noble Arts of Cadiz and the School of Magisterium. In addition, he came to welcome the Sisters of Charity, a teaching school called the College of Jesus, Mary and Joseph and for a time was the Seat of the Supreme Court. Finally and to this day, it is part of the City Hall of Cadiz, which uses it as a Conservatory of Music.

Despite the diverse functionality that has been welcoming over the centuries, the Tavira Tower has continued to stand, protecting the city of Cadiz from above with its imposing presence. 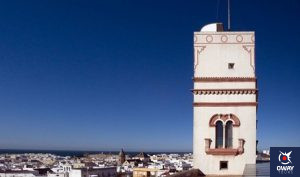 During the winter season the monument is closed, so it can be visited during the following months of the year:

Please note that the maximum time that this visit will last will be 45 minutes and can be entered up to one hour before closing.

In addition to its obvious spectacularity and the privileged views that you can enjoy from its viewpoint, you will be amazed by this treasure of the Costa de la Luz at the following prices:

The Tower is located in the center of the historic center of Cadiz, specifically in Calle Marqués del Real Tesoro, number 10. It is located 500 meters from the Cathedral, so if you go on foot you will be a 5 minute walk away.

-His name comes from the surname of the first watchman who worked on it in 1778, Antonio Tavira.

-Although the Tower is owned by the City Council, it belongs in its entirety to a private authority due to an administrative concession.

-Inside is the first Dark Chamber of Spain. In it you can enjoy a 360-degree tour throughout the city, with images in motion and in real time. 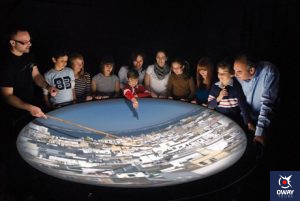 -It has two exhibition halls, one where the operation of a dark camera is explained, along with its history and other dark cameras are mentioned in Spain. In the other room will take a tour of the history of Cadiz in the eighteenth and nineteenth centuries. 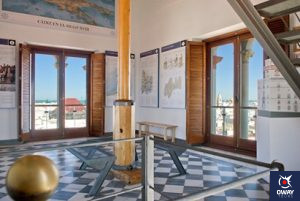 -To reach the top you will have to climb a total of 173 steps, although for a few years it is carrying out a project to install an elevator.