Located in the heart of the Historic Center, we find this beautiful open space that complements the most famous building of Cordoba, the Mosque-Cathedral. It is presented as the main and only courtyard of the monument, being the first element that you find as soon as you access the end of the Mosque. It has dimensions of 130 meters long and 50 meters wide, its name being the almost 100 orange trees planted in it at the end of the seventeenth century.

Beautiful and ancient fountains, along with ancient trees and a historic cobbled floor, make up this splendid courtyard surrounded by galleries and porches, which is considered one of the most pleasant places to hang out in the city. Want to know more about him? Well, here’s all the information.

It was commanded to be built by Emir Abd Al-Rahman I in 786, having as its original function that of being a religious courtyard where rituals were performed, such as pre-Muslim prayer purifications. In the 10th century, Abd-Al Rahman III commanded to make a modification of the courtyard by observing that it is disproportionate due to an earlier work done by the previous caliph (Abd Al Rahman II). In this way, the courtyard is expanded to the north replacing the mosque’s mine with a larger one. 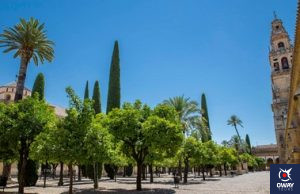 After various modifications and with the end of the Muslim caliphate, the Christian courtyard will be given way, celebrating in it the Catholic ceremonies of the Cathedral, indicating that it had very different functions throughout its historical stages. However, this contrast is observed not only in the functions but also in the architecture itself, since in the caliphate stage the northern facade was opened towards the courtyard and in the Christian era (with the implementation of the corresponding chapels) a new construction begins in which a closure of this is carried out and the garden ends up divided into three sectors , each having a Renaissance-style font at its center.

Currently, various archaeology work is being carried out in the area, as for some time remains of the old building have been under the courtyard prior to the existence of the Mosque-Cathedral.

The entrance is totally free, being able to be inside for as long as you want. On the other hand, if you are looking to visit the Mosque-Cathedral, the price of the general entrance will be 11€, 9€ for people over 65 years old, people with a disability greater than 64% and large families (these prices apply for all those who are not residents of the province of Cordoba)

It is advisable to make the visit during the spring months, because especially in the month of May Cordoba is full of beauty and this patio is one of the most splendid places where you can enjoy a moment of tranquility enjoying the smell of jasmine that the orange trees give off.

The Patio de los Naranjos is part of the architectural complex of the Mosque-Cathedral, located in the Jewish Quarter of Cordoba, specifically next to the Roman Bridge and the Arch of the Bridge.

It should be noted that it is an old quarter that has difficulties when travelling in any means of transport, so it is advisable that you do not access the area by private transport and if possible travel through the neighborhood on foot. If you still want to access in a means of transport, urban buses on lines 4, 5, 6 and 7 pass through that area.

If you access by private transport we recommend parking the car before accessing the Jewish quarter:

-About 10 minutes by car you will find the Archangel Shopping Center, which has free underground parking.

-The private car park La Mezquita is located within a 7-minute walk, where you will have to pay a cost of 1’95 euros per hour. Next to the Miraflores Bridge you will find the Parking La Ribera, at a price of 1 x 80 euros an hour. Another alternative, and the nearest one, is the parking Historic Center, an outdoor car park at a price of 2o20o per hour.

If you do not want to pay to park and at the same time be nearby, you can try parking across the river, through the area of tower of la Calahorra, where there are a lot of parking spaces. Or as a last option, next to the Alcazar of the Christian Kings you will find the Fleming neighborhood, where if you are lucky you will find some parking.

To enter the courtyard you must reach the Mosque-Cathedral and access by the so-called “Puerta del Perdón”.

-It was in 2021 that the remains of the old building below the pliers of the Patio de los Naranjos have been discovered, experts point out that it is an Episcopal Palace of the time of the Visigoths. This finding has completely redefined the history of the Mosque-Cathedral within the Iberian Peninsula.

-The courtyard has three fountains, one of them being the fountain of Santa Maria. This element hides a legend, and is that among the Cordoba population it is said that single women who drink from their main pipe will get married soon after.

-In the courtyard we not only find orange trees, and next to the fountain of Santa Maria we find an ancient olive tree (which gives name to the pipe of the fountain) that has been inspired for the creation of many popular sayings and coplillas. This tree, with its twisted trunk, brings an even more historical image to the courtyard and also… is able to give more than 60 kilograms of olives in a year. 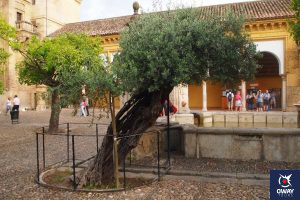 -Among its corners are the porched galleries, which during different historical stages were used to house venues such as schools and hospitals. Currently, in one of the corners of these galleries is projected an introductory video for those who take a guided tour called “Nocturna Alma de Córdoba”

-Under the courtyard is installed a cistern for purifications, which provides the necessary water to Muslims who will enter to perform their prayers in the Mosque-Cathedral. Studies are currently underway on this element, the construction of which dates back to the 10th century. 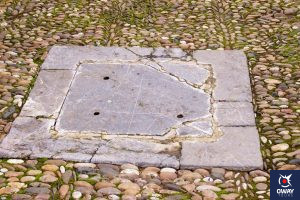