The Andalusian Centre for Contemporary Art in Cordoba

The Andalusian Centre for Contemporary Art, also known as C3A, is a place that dedicates its main activity to producing and creating contemporary art. For this reason, many artists are able to achieve their work goals in this space, researching, producing their works and exhibiting them to the public.

In this centre you can enjoy culture while at the same time contemplating the encounter between various disciplines.

One of the main objectives of this space is for the public to learn more about contemporary artistic languages, being able to appreciate both the finished work and the process that has been followed to reach it.

Everything the Andalusian Centre for Contemporary Art in Córdoba has to offer is aimed at all audiences. So there is no excuse not to visit this place, go ahead and come and see how wonderful the world of visual arts can be!

History of the Andalusian Centre of Contemporary Art of Córdoba

This centre is located in the Campo de la Verdad neighbourhood, on the south bank of the Guadalquivir River.

Its construction was the result of an international competition for ideas organised by the Junta de Andalucía, which was won by the architects Fuensanta Nieto and Enrique Sobejano, who were the architects behind the design of this project.

Work on the project began in 2008 and was completed in 2013. It was inaugurated by the president of the Junta de Andalucía at that time, Susana Díaz, on 19 December 2016. This opening ceremony was attended by the Mayoress of Cordoba, Isabel Ambrosio, the Andalusian Regional Minister of Culture, Rosa Aguilar and the President of the Andalusian Parliament, Juan Pablo Durán.

The inauguration included three exhibitions open to the public until 16 April 2017: ‘Englishes’, by Nicoline van Harskamp; ‘The value in mathematics: How do we learn’, by Falke Pisano; and the art project ‘Montaña Negra’. These exhibitions were a great success with the public.

At present, the opening hours of the Andalusian Centre for Contemporary Art in Córdoba are:

Mondays are closed for staff rest and cleaning.

At this time of the year, the temperature in Cordoba is very good, neither cold nor suffocatingly hot, so we recommend you visit at any time of the day. If you want to avoid crowds, the best time would be early in the morning or late in the afternoon.

On the other hand, it will be closed on the following public holidays in 2021:

On all other public holidays, the Centre will remain open to the public during the established opening hours, without interruption.

Admission to the Andalusian Centre for Contemporary Art is free of charge, whether you go in a group or individually, you will not have to pay anything to enjoy the visual art that this centre possesses.

In addition, due to the current health situation, no paper or document will be handed out at the entrance to the centre, in order to avoid contact between people. Lockers are not allowed.

Access is allowed with handbags that do not exceed the maximum dimensions or small backpacks as long as they are carried in the hand.

As recommendations in accordance with the pandemic, we ask you to wear a mask, to always keep a safety distance of at least 2 metres and to use the disinfectant gel that you will find at different points of the site.

First of all, it has about 1000 square metres where workshops and laboratories for visual and audiovisual creation are developed. In addition to this, there is another area of 600 square metres for the union with other disciplines, more specifically the field of live arts.

On the other hand, it has another large hall where the exhibition and presentation of different works takes place. It also has a specialised documentation centre for artists, which is open to the public.

Finally, there is an area where activities suitable for the whole family are developed and a space in the centre’s garden, where open-air activities will soon be held for anyone who wants to see it. 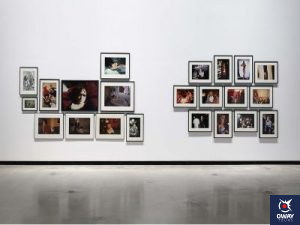 The Andalusian Centre of Contemporary Art of Cordoba is located in Carmen Olmedo Checa street. This street belongs to the Campo de la Verdad neighbourhood, and is just a few metres from the Cordoba football stadium “El Arcangel”.

It can be reached by car, although parking is not very easy. Even so, next to the aforementioned football stadium, there is a shopping centre with which it shares its name, which has a free car park with an established timetable.

Another option is to take the city bus. As it is a very busy area, around this centre there are several bus stops where, depending on where you are coming from, you have several options to choose the most suitable one.

Even so, the most recommended way to get there is on foot, as this way you can stroll along the riverbank, while you relax to the sound of the river and get to know another of the highlights of the Cordoban municipality.

Curiosities about the Andalusian Centre of Contemporary Art in Córdoba

Apart from all the halls that this centre has, already mentioned above, it also has a more special space called “La Mediateca”. This place is made up of 4K screens for individual viewing, and, in addition, six online consultation terminals for researchers, with which the user can consult everything collected in the Filmoteca de Andalucía, something interesting and original. This film library has more than 13,000 volumes on cinema and audiovisuals, which is wonderful for film enthusiasts.

Another curiosity of the Andalusian Centre of Contemporary Art in Cordoba is its façade, which is totally abstract and attracts the attention of the spectator. It is designed to offer an appearance during the day, while at night it becomes a dynamic wall of communication. It is 100 metres long and contains 1319 hexagonal holes. Each of them serves as a reflector for an integrated artificial light source. The intensity of each reflector can be controlled individually, so that a large, irregular light scene can be created.

The next step is the generation of images and models of the Guadalquivir river. 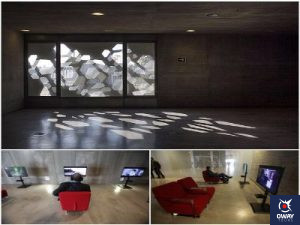 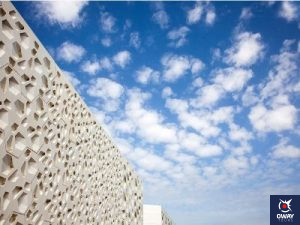