The Alcazar of the Christian Kings

The Alcazar of the Christian Kings is located in Cordoba and is one of the most emblematic symbols of the three cultures -Muslim, Christian and Jewish- that lived together in the city for 800 years until the conquest of the Christians in the 13th century, and the subsequent religious and cultural standardisation that took place.

History of the Alcazar of the Christian Kings

The Alcazar of the Christian Kings has played a central role in political government since its origins. During the Roman era it was established as the headquarters of the customs, and the residence of high political officials such as the Procurator and the Quaestor, who governed the city. With the arrival of the Visigoths to the city, the building was occupied and used, but was not significantly modified. With the Muslim invasion, during the time of the emirate, Abd al-Rahman I and his successors, Al Hakam I and Abd al Rahman II carried out numerous works to extend the building, they built canals, gardens, cavalries, and adapted it to the Muslim way of life.

When Abd al Rahman III founded the independent Caliphate in the 10th century, the Alcazar lost a lot of importance as the powers were centralized in the palatine city of Medina Azahara, and in later centuries it was very badly treated and deteriorated due to the looting that the city of Cordoba suffered. Numerous elements from different historical periods are preserved: Roman ashlars, columns and capitals, and Visigoth and Islamic plinths and mouldings.

The Christian reconquest, in 1236, was the moment in which Fernando III the Saint distributed the site of the old Andalusian Alcazar among the bishop, some nobles and the order of Calatrava. It was Alfonso X the Wise, his son, who started the works in order to turn it into a royal residence, and already in the 14th century, Alfonso XI the Just ordered its fortification between 1327 and 1329. Ten illegitimate children, including the future Enrique II of Trastamara, were born from the meetings between Alfonso XI and the noblewoman Leonor de Guzmán in the Alcazar.

It was also a key scenario for the development of some episodes of the civil war between Pedro I the Cruel and Enrique II. After Enrique II’s victory, the building was again used as a royal residence, something that was repeated by his successors, such as Enrique III the Suffering, his grandson, whose arrival in the city took place in 1495. Since 1482 the Catholic Kings had been using the Alcazar as their headquarters, and it was from here that they planned the conquest of Granada, which was completed in 1492. It was also the scene of the interview between the kings and Cristóbal Colón before he discovered America in 1486. In 1499, Isabel and Fernando stopped using the Alcazar as a royal residence and gave it to the Court of the Inquisition to house their headquarters in Cordoba, and the building was fitted out to provide it with dungeons and jails, so it lost its palatial character.

In the 19th century the courts of Cadiz abolished the Holy Office, and from that moment until 1932, its facilities served as a prison, first civil and then military. With the Second Republic, the building was classified as a Historical Monument, although it was so deteriorated that in 1955 the mayor, Antonio Cruz, ceded the Alcazar to the Cordoba City Council, which commissioned the architect Víctor Escribano Ucelay to restore it. The building was added to the World Heritage List by UNESCO in 1994. 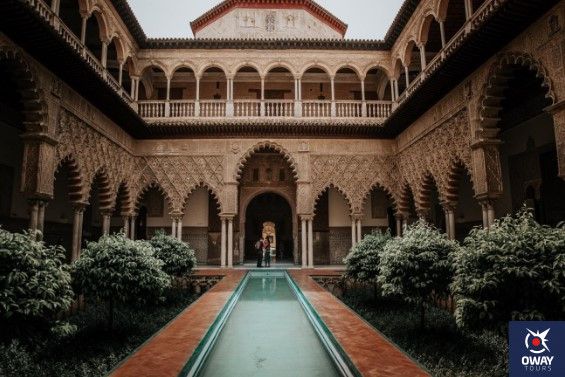 Parts of Alcazar of the Christian Kings

Inside the Alcazar we can find different towers, among them the Tower of the Lions, whose interior is not of great dimensions and, in each one of its angles, there is a small column on base that divides it in thirds, with bundles of three columns in triangle, and the one in the centre is twice the diameter of the others. This order supports a ribbed vault, and its arches outline its octagonal base, while the remaining angles are covered with three-ribbed vaults.

The top floor of the Tower of Lions is accessed by a small spiral staircase, which is in a tower attached to it. From this enclave we have a spectacular view, as we can contemplate the city of Cordoba almost completely.

Another of the towers that we find is the Tower of Homage, which is connected to the first by a corridor in the north wall. This passage must have had great importance within the Alcazar. The body of the Homage Tower is taller than it is wide, it has a dominant appearance, being the most imposing of the towers, and it has a polygonal floor plan. Gothic architecture was used, but the hand that made it was not as skilled as in the case of the Tower of Lions, which was made by French masters. In this case it is thought that the tower could have been built by less skilled Spanish disciples. The vault has four ribs, with a hexagonal and irregular plan, and two of the ribs are extended by the pendentives. Nerves die in the capitals, and they were carved in situ.

The main room of the Homage Tower is an octagonal plan, with low columns and a high vault, whose ribs rest on capitals decorated with plant motifs. It is in the room that the first reception between the Christian Kings and Cristóbal Colón is historically located. The tower’s terrace is accessed by a straight staircase, which is illuminated by two rose windows. From the Homage Tower you can access the Hall of Mosaics by going back through the passage, going down the stairs and crossing the entrance gallery. 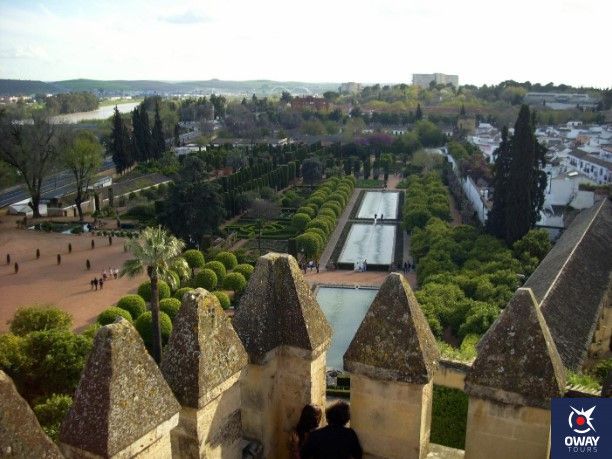 Across the entrance gallery is the Mosaic Room, of a marked baroque style. It was built in the 18th century and is located on the north wall of the Alcazar, above the vaults of the Mudejar Royal Baths. After its construction, it was used as a Chapel of the Inquisition and later became a Prison Chapel.

It has a rectangular floor plan and is covered by a vault with fajon and lunette arches, which in turn is decorated with geometric motifs typical of 18th century. The name of this room is due to the decoration of many high-quality mosaics. They were extracted from the subsoil of the Plaza de la Corredera, where the remains of the ancient Roman amphitheatre were thought to be, although this hypothesis is not currently being considered. 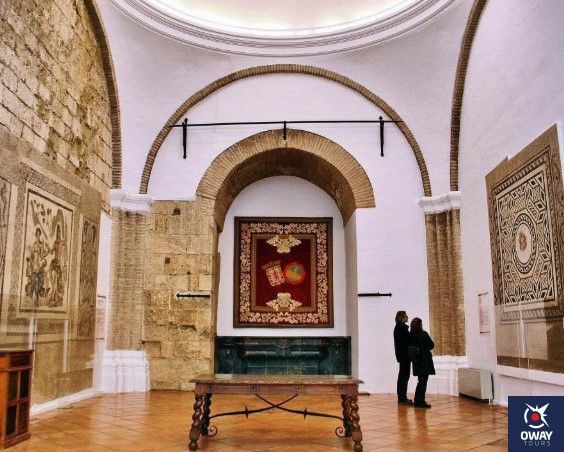 Several pools are in the Alcazar Gardens, which originally used the waters of the Guadalquivir River and, in turn, water pipes that came from the Sierra. The Gardens are located in old orchards, which produced food for the inhabitants of the Alcazar.

Currently, the vegetation of the gardens is composed of native plants and trees such as cypresses, orange, lemon, and palm trees. Among the most common flowers we find roses and gitanillas.

In the gardens we also find statues of the Catholic Kings, Isabel and Fernando, welcoming Cristóbal Colón. This statue symbolizes the moment when Colón asks the Catholic Kings for funding to undertake the route to the Indies, which would eventually lead to the discovery of America.

To go back to its historical origins, it would be Julius Caesar who would plant different floral species and exotic trees, such as the oriental banana, characterized by providing ample shade and which helped soften the temperature in the gardens. The current gardens began to be laid out during the Arab period, located in the southern area of the enclosure. Its layout completed the space that was destined to the royal harem, very close to the baths, and the final space was finished off with an orchard.

The work could have begun in the time of Abd al Rahman II, in the year 822. In this year also was made the aqueduct that channeled the waters of the Bejarano and Caño de Escarabita, which indicates that it had to be made in these years approximately. From Caño de Escarabita a branch was taken that derived to the Alcazar, making it possible to cover all the needs of the Palace.

Today, the gardens are highly visited by tourists from all over the world and are even visible at night thanks to the artificial lighting they have been provided with. 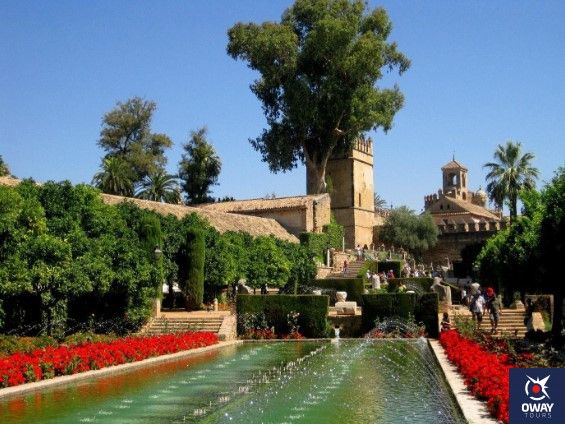 Curiosities about the Alcazar of the Christian Kings

Among the curiosities that we can mention about the Alcazar of the Christian Kings, it is worth noting that its origins are Roman, being used in its origin as a customs house and residence for high officials, and continued to be its function in the Visigoth era, not being until the Mulsim era when it began to be configured as a place of residence until the construction of Medina Azahara.

Moreover, it was the place where Isabel I of Castille met Cristóbal Colón before the discovery of the new world, specifically in the Tower of Homage, and Isabel herself would sell her jewels in order to pay for the ships.

It was also a fundamental enclave in the campaign of conquest of Granada since the Catholic Kings resided here for 8 years to control the seizure of the last Muslim kingdom in the peninsula. It also went from being the seat of the court of the Inquisition, in 1499 after the conquest of Granada, to its abolition in the 19th century, when it became a prison.

In addition, the Alcazar houses Roman elements in the mosaics, dated between the 2nd and 3rd centuries, that were found in the Plaza de la Corredera, as well as a sarcophagus that was found in the Huerta de San Rafael el Brillante from the 3rd century.

Timetable to visit the Alcazar of the Christian Kings

It is possible to visit the Alcazar free of charge on Thursdays that are not holidays, from 12:00 to 14:30. In addition, those over 65 and under 13 are always free to enter. On the other hand, accredited students up to the age of 26 have a 50% discount on admission. For the others, the entrance fee is 4.50€. Therefore, visiting the Alcazar for free is possible, so it is feasible to visit every corner of the city of Cordoba without spending too much money.

How to get to the Alcazar of Christian Kings

The Alcazar of Christian Kings is located in Plaza Campo Santo de los Mártires, and by public transport we can use the bus, whose lines 3 and 6 will leave us near the Alcazar. It is advisable to use public transport, since it is difficult to park in this area, and in this way we facilitate the access of visitors to the architectural complex.