What monuments to see in Cordoba? | OWAY Tours

Medina Azahara is one of the three world heritage sites that the city of Cordoba has. It is undoubtedly an essential visit of which we want to tell you more about its history, parts and curiosities. As well as more practical information.

Medina Azahara is a caliphal city built in 929 under the reign of Abd-al Rahman III. This was the last independent emir and the first sovereign of the Umayyad Caliphate of Cordoba, founded by himself. Symbolically, Medina will see its destiny linked to the splendour and fall of this new government. His own creation is an exercise in demonstration of power and luxury by Abd-al Rahman III. A way of demonstrating to his adversaries, the newly established Fatimid Caliphate of Ifriqiya, his preponderance. In addition to the political rivalry that existed between the dynasties, there was a religious squabble. The Fatimids were Shi’ites while the Umayyads belonged to the Sunni Islamic branch.

In other words, Azahara had to represent the relevance of the caliph’s authority and also the moral superiority of his ideological current. For this reason it was designed in such a way as to surprise visitors. Thus the entrance to the town consisted of a triumphal door followed by eight large arches, which in turn would be secured by a whole series of soldiers and officials. The minaret of the Mosque also rose above the streets and was visible as a large tower from afar. In the same way the palace ends up creating a sensation of continuous flow of rooms and meeting spaces that gradually increase in wealth. As it has been said, the Caliphate and Medina will be closely related so that the government of Alhaken II, son of Abd-al Rahman III will not bring many changes to the city with respect to his father. Rather the administration of Alhaken II will manage to maintain and even surpass the glory achieved.

The opposite will have to be said of his successor Hisham II, who took office as a child so he will have to be given a regent, Almanzor. This famous character turned the caliph into a puppet allowing Hisham II to seclude himself in Medina Azahara without doing much more than enjoying his riches. In the end this situation will result in a series of power struggles that will end up dividing the Caliphate into small Taifa kingdoms. Without reaching the centenary Medina ended up in oblivion after repeated looting and destruction.

Until the first excavations, it was believed that Cordoba la Vieja was located there, remains that dated back to Roman times.

It should be borne in mind that only 10% of the total site has been excavated, which means that it is an archaeological complex of enormous dimensions. It was a city that housed part of the caliph’s power and therefore, apart from its size, it has many spaces of great interest and recommendation. Nevertheless we are before a protected space with which there are restrictions in its stroll.  In addition there is not so much time as to see everything in brief detail. Therefore we are going to focus on the fundamental parts to understand the composition of its urban fabric. It is worth noting that in Medina Azahara, if you look, you can see chunks of the old canalisation, which is very curious due to the reuse of the old Roman system for its benefit. The city’s water comes from the Valdepuentes aqueduct. 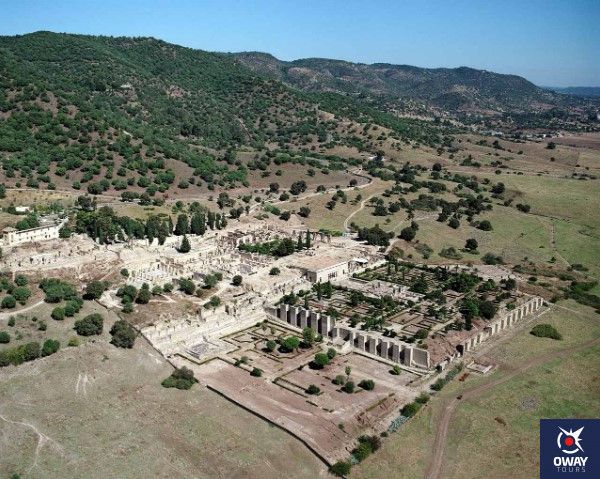 Due to its geographical location, the engineers were forced to structure it from three superimposed terraces. These gave security to the naturally sloping land and also served to organize the city into three parts differentiated by walls: the caliphal residence, the administration with the residential neighborhood of the civil servants and the public space along with the more humble houses. In this way, the city separates the private sphere from the official. Even so, one can see how these two areas of life are also similar. For example, the structure used in all the spaces is similar to the entrance of an open site with a portico, which gives rise to a corridor that distributes the different rooms. The mosque also served as an union and connection between the middle and lower terraces. Evidently the different functions of the building are reflected in its decoration and ostentation. Due this that the most emblematic architecture is found in those parts that were dedicated to politics and especially to the reception of ambassadors. Of course, the palace was the richest part of the city and was also located in the highest area, thus being able to contemplate the whole territory. 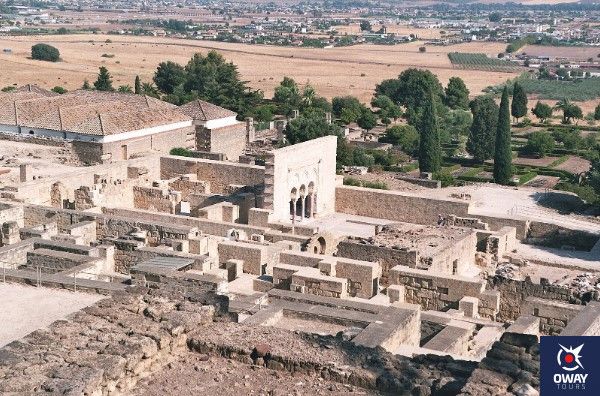 The wall, as usual, surrounded the whole of the settlement following the pattern of the three terraces. The main entrance was through the North Gate, which was also the one that connected with the Road of the Walnuts, one of the three paths that led to Cordoba. From here came the bulk of the supplies needed by the town, both basic foodstuffs and objects of trade. The fact that it had very marked and controlled entrances facilitated the security that the town needed. Unfortunately, as with other sites, the ashlars already worked were a good material for the new buildings in the area. So, systematic stone robbery has caused serious deterioration of the wall. In fact, what we see today is the result of a partial reconstruction at the beginning of the 20th century. To check the differences it is good to have access to photographs of the enclosure during the 19th century. 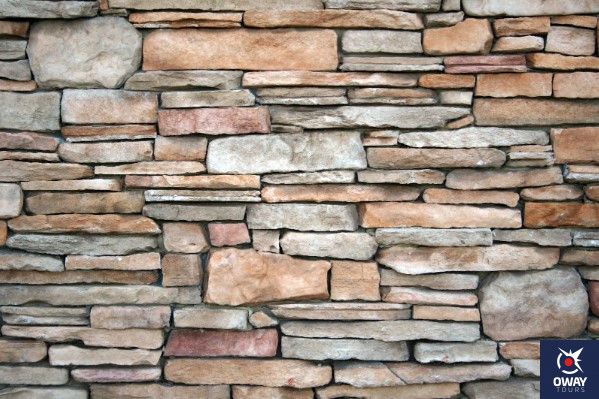 Without a doubt, the building that stands out the most is the Alcazar, that is, the royal residence. Within its spectacular rooms, the main one is the Salón Rico which constitutes the central axis of the palace. In it, the parties, ceremonies and receptions of the highest status were to be held. Through this hall passed the embassies of almost the whole world from the Christian kingdoms of the north, the Byzantine empire and different governments of the Magreb. It is a space that is arranged in a basilical plan through three naves covered with arches that open to a pond with its corresponding garden. The walls that surround and compose this room are decorated with plant motifs that as a whole seem to be repeated but in reality each one is different. Although the façade has not been conserved, it was also embellished with natural themes since the stone was intended to continue the aesthetics of the flora. The arches are also painted in a two-colour way in the style of the Mosque of Cordoba. The ceilings, which were covered with wood, had an ornamentation of clear cosmological tendency since they represented the firmament. All this has been reconstructed from the remains found and what can be seen is the result of the work of the archaeologist Felix Hernandez during the 1940s. 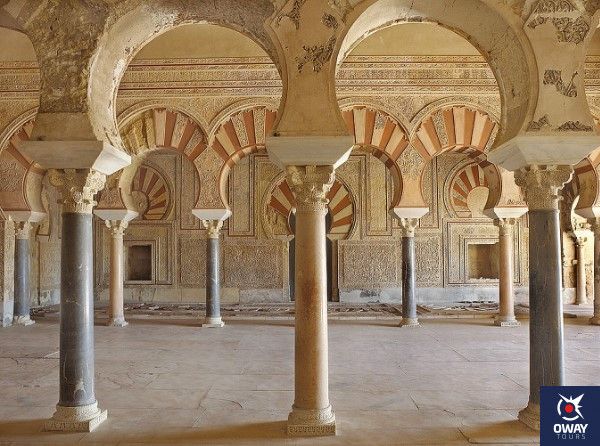 On the upper terrace there were only three residences: the royal house, the house of the successor and the house of Yafar. On the highest part was the al-mulk, the abode of power, that is, where Abd al-Rahman III lived. Today it is one of the most deteriorated areas of the site. In spite of this it is evident that it was a great building, which can be appreciated through the remains of the decoration and its location that dominated the whole valley of the Guadalquivir. Apart from the Caliph in a somewhat lower area, the Prime Minister, Ya’far ibn Abd al-Rahman, also lived there. Although he gives his name to the house, it is not known if he really lived there. The house is distributed from three spaces: one public, one intimate and one service space. To the west of this construction is the pool house. It is supposed that al-Hakam II resided there, who as his successor was the only one of the caliph’s sons who was not in Cordoba. In the rest of the Alcazar lived the service or served for the reception of people. 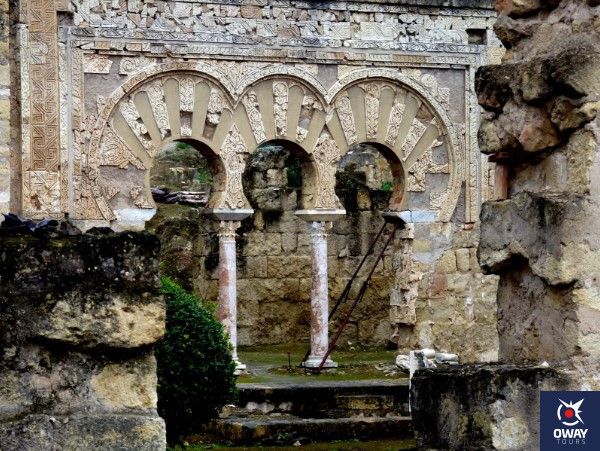 The temple is situated to the east of the city and curiously outside the walls. It is believed to have been built between 941 and 945. Unfortunately, its structure suffered serious deterioration caused by the constant plundering of materials. What we can say is that it corresponds to the classic model of a mosque, oriented towards Mecca, with a rectangular floor plan and divided into three basic spaces (courtyard, prayer room and ablutions courtyard). The latter, called the sahn, is covered with galleries except for one of its sides which leads to the prayer room. This oratory (haram) consists of five naves with eight series of horseshoe arches. The caliph of the time could enter the haram through a passage that connected it to the Rich Room. Next to the entrance door is the minaret, a tower attached to the sacred building from which the muezzin could call the faithful to know that it was time for prayer. 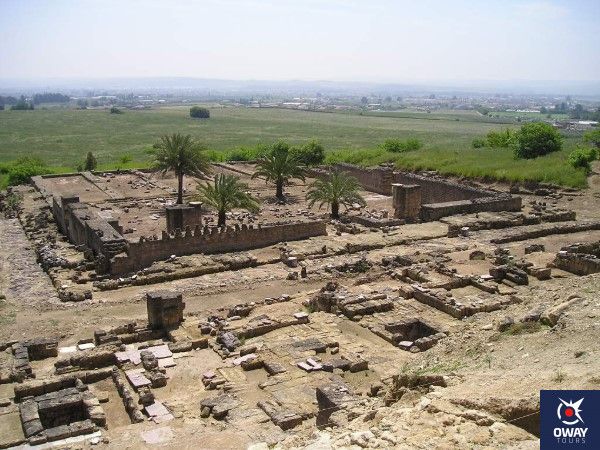 In spite of the short time that Medina Azahara was inhabited, it left behind a great trail and much mystery. For this reason there are many things that can be commented on in this section. For example, that it is the largest archaeological site in all of Spain and that 90% of its total surface area has yet to be studied. However, we have chosen to point out those that have more to do with its construction as an almost fabulous or imaginary space. Also to refute some of the most widespread legends about the whole and then not to be disappointed. 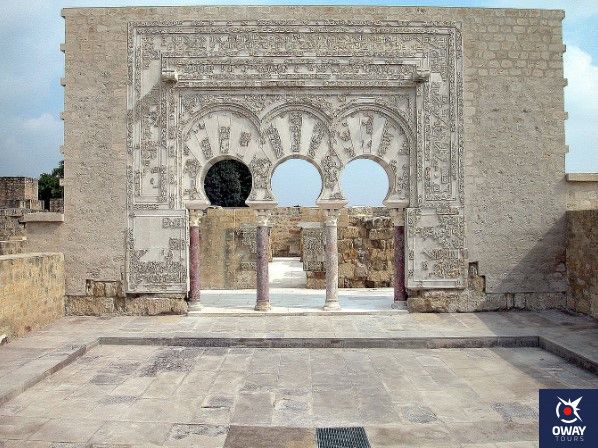 The visit begins at the Museum of Medina Azahara, which offers an interpretation, some of the most significant objects of the city and audiovisuals for a better understanding of its past. The tour lasts approximately one hour and from this same building you can take the shuttle bus to the archaeological site. Winter opening hours are from 16 September to 31 March, Tuesday to Saturday from 09:00 to 18:00 and Sundays until 15:00. From 1 April to 30 June the weekly opening hours are extended to 21:00. From 1 July to 15 September, however, the opening hours are reduced to Sunday service, i.e. from 09:00 to 15:00. In addition to every Monday of the year, the complex is closed on 1 and 6 January, 1 May and 24, 25 and 31 December.

How to reach Medina Azahara

There is a daily bus from Cordoba to the archaeological site. The price is 8.5 euros for adults including the return trip, although there are some discounts for minors, large families, etc. The journey is made from Tuesday to Sunday at 11:00, on weekends the service is reinforced with one at 10:00. This trip offers you a time of two and a half hours to contemplate the remains. It is important that you pay attention to the timetable as the bus is the only way to get back. If the idea is to go by car, you can do it by the Road of Palma del Río (A-431) until you reach the sign of Madinat al-Zahra. However, when you arrive at the reception centre/museum it is obligatory to leave your vehicle parked in the car park as only the official shuttle can get to the site. Entry is free for EU residents. 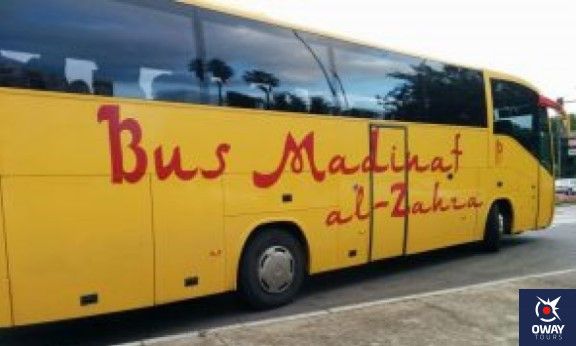