All the Information about The Synagogue of Cordoba | OWAY Tours

The Synagogue of Cordoba

The Synagogue of Cordoba is one of the least known monuments in the city. However, it has great historical and artistic importance, and was also of great social and political importance at the time, and is the only building of its kind still standing in Andalusia.

History of the Synagogue of Cordoba

The Synagogue of Cordoba was built in the Mudejar style and is the only synagogue that exists in all of Andalusia, as well as being one of the only three synagogues from this period preserved in Spain. It was built in 1314 by the master builder Isaq Moheb, and in 1885 it was declare dan Asset of Cultural Interest in the category of Monument. It is located in the historic centre of the city of Cordoba, an enclave that was declared a World Heritage Site in 1994.

After the expulsión of the Jews in 1492 by the promulgation of the Edict of Granada the building was transformed into a hydrophobic hospital. Buit that was not the only use given to the old synagogue, which was also converted into a hermitage where the shoemakers’ guild settled, and a nursery school until 1884, when inscriptions were discovered that led to a thorough restoration process.

After the discovery of the inscriptions, in 1885, it was declared a National Monument. From that moment the monument went through several phases of restoration, by the hand of Félix Hernández in 1928, began a second restoration in 1977 to achieve the reopening in 1985, and in 2017 was closed to the public for a new restoration, opening again in 2018. 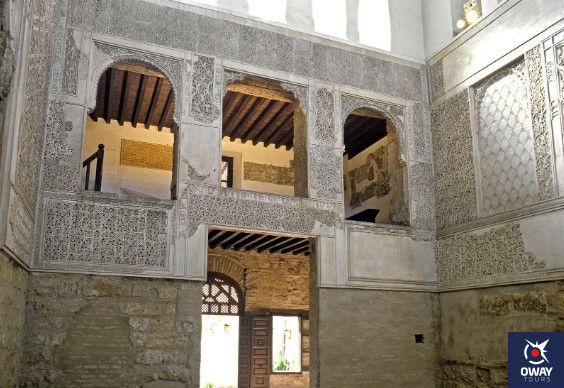 Parts of the Synagogue of Cordoba

The courtyard is accessed from the street through the east wall and is approximately 25 m2. The walls surrounding the courtyard are about 5m high on the north and west walls, while on the south wall it is about 3.5m, and on the east wall about 6m, and it is this that contains the entrance. Due to these dimensions the courtyard has a trapezoidal floor plan, something quite unusual in this type of architecture.

The entrance of the synagogue is on the facade facing the north wall of the courtyard and is composed of three openings: a door and two windows. At the entrance we find a room that houses a staircase inside, which leads to the women’s gallery. Historically, the entrance served as a cloakroom and a maskite, that is, a pool for ablutions. 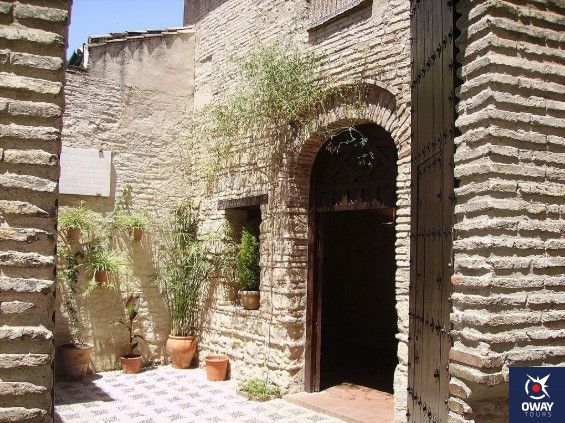 This is the area where ablutions, that is, ritual purification baths, were performed before the liturgy in judaism. They are basins where a whole body fits, since the construction of this type of áreas was done under strict rules, and the wáter was not allowed to stagnate, so they were located in places with good canalization so that the wáter was constantly renewed.

This site was acquired by the Andalusian Government in 2008 with the intention of creating an interpretation centre for the synagogue, so that all the tourists who came each year could be attended to. After several archaeological tests, it was discovered that there was a mikveh, contemporary to the synagogue, as well as a Talmudic school, which would reveal that the synagogue complex was of great dimensions.

The prayer room is the largest in the whole synagogue, although it is quite moderate compared to the volumes of the homes and building of the time. It has a rectangular floor plan and a high ceiling of approximately 11 metres. Its roof is coffered, on the eastern side we find the tabernacle, a space that is reserved for the Torah, and is crowned with poly-lobed arches that are framed in an alfiz, and its surroudings are decorated with laceries. On the opposite side of the tabernacle we find a niche with a single arch, also poly-lobed and pointed, where the altarpiece of Santa Quiteria was located. 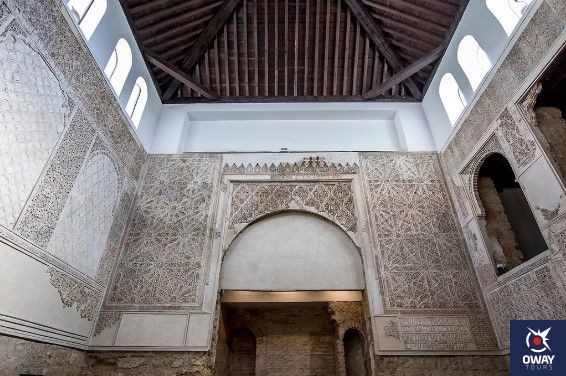 Above the hall is the women’s section of the synagogue, and its dimensions are the same as those of the hall. Some of these measurements suggest that this part was added to the synagogue after the rest of the structure. It is composed of three large interlaced arches, which are located in the direction of the sanctuary, and are decorated with stucco and latticework, something very common in the characteristics of Sephardic synagogues. On the arches we also find inscriptions in Hebrew and very elaborate geometric patterns. The central arch has a different decoration from the exterior ones, besides being higher since it was enabled as an entrance. 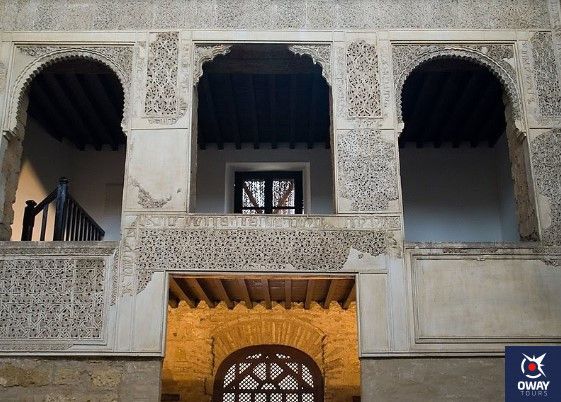 Curiosities about the Synagogue of Cordoba

The dimensions of this Synagogue are considerably smaller than those of most of the buildings constructed to house this function. This may suggest that the construction of the synagogue was strongly influenced by the Christians who ruled the city. Furthermore, this synagogue is in an excellent state of conservation despite the different uses the building has had and its durability over time. There are numerous texts and inscriptions that have been preserved, although not all of them have reached our days. On the southern wall we can find fragments of the Book of Proverbs, and above the doors we find parts of Psalm 122. On the western and eastern wall some inscriptions are also preserved, but these are of lesser quality. On the northern wall we find preserved inscriptions that refer to the fourth verse of the Song of Songs. Some of the texts that have been preserved are: “I am built like a tower of the Messiah”, “Let us bow our knees to the Lord”, or “Lord with joy, enter this presence”. 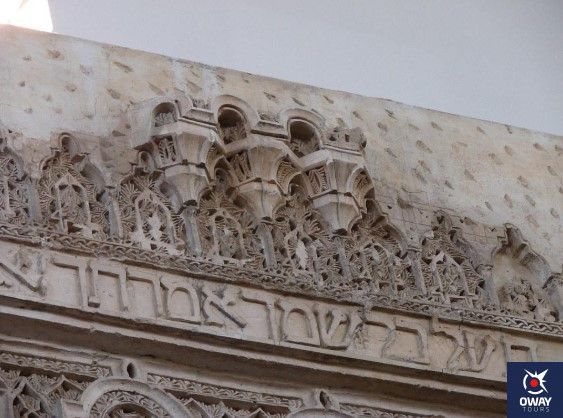 Timetable to visit the Synagogue of Cordoba

The price charged at he entrance is symbolic, being free for residents in the European Union, ant those who are not, only have top ay 0.30 euros.

How to get to the Synagogue of Cordoba

The access to the Synagogue of Cordoba is simple, it is located in one of the most spacious and busy streets of the city, specifically in the Conde Vallellano Avenue. It is behind the La Cruz Roja Hospital, in the heart of the Jewish quarter. Parking in this area is quite difficult, so we recommend the use of public transport to get there. In case you want to go in our private vehicle, it is possible to park in the car park of La Victoria Avenue or in the car park of Doctor Fleming. From the Plaza de Las Tendillas, we will go to the Jesús y María Street until we reach the location of the Mosque, then we will go to the Conde y Luque and Deanes Streets, and we will go to the Plaza del Cardenal Salazar, and just behind this square we will find the Jewish quarter.