All the information about The Royal Stables of Córdoba | OWAY Tours

The Royal Stables of Córdoba

The Royal Stables of Córdoba (Caballerizas Reales) are located next to the Alcázar de los Reyes Cristianos and were founded by Philip II with the aim of creating the purebred Spanish horse. Today, the stables house no less than fifteen carriages from the 19th century. These stables were declared a National Historical Monument in 1929, and became part of the National Heritage. The poet Federico García Lorca himself called them “the cathedral of horses”. The Caballerizas Reales de Córdoba are an example of the care, purity and equestrian art of Andalucía. If you would like to discover the history, the rooms that make up the stables and how you can visit the Caballerizas Reales de Córdoba, keep on reading!

History of The Royal Stables of Córdoba

The Royal Stables of Córdoba are a group of stables built in 1570 by decree of King Philip II in the city of Córdoba, with the aim of breeding purebred Spanish horses, which is the origin of the so-called Andalusian horse. They were built on a site owned by the church, located between the city’s defensive walls and the Alcázar de los Reyes Cristianos, and were built on the site of the old stables of the Caliphate period, which, during the reign of Al-Hakam I, housed more than two thousand horses. 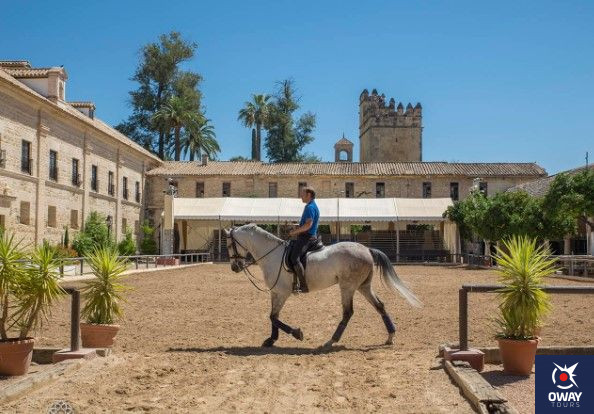 Don Diego López de Haro y Sotomayor, the King’s main stableman, was in charge of the construction works. He dedicated his life to a careful work of selection and genetic improvement of the horses in the Royal Stables and pastures of the province of Córdoba. However, in 1734 the stables caught fire and the building was completely destroyed. King Philip V tried to make room for the horses, but it was not until the reign of Ferdinand VI that the rebuilding of the Royal Stables began. The stables remained as royal property until the reign of Fernando VII, later becoming state property. Since 1866, the Spanish Army has been in charge of continuing the tradition of breeding the purebred Spanish horse. Until 1995 the building of the stables was owned by the Ministry of Defence, when the Army Stallion Deposit was moved to Ecija. In 1996, the Defense Sub-delegation in Córdoba moved there, until 2002, when the ownership of the building was transferred to the city council. 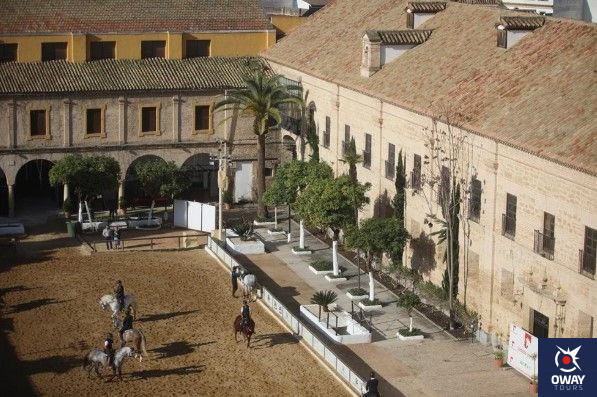 Parts of the Royal Stables of Córdoba

The Royal Stable of Córdoba is a rectangular building with spacious vaulted rooms where the pure-bred Andalusian horse, or Spanish horse, was bred for centuries. The central courtyard, the main stable, the riding arena, the Torreón de la Muralla and the gardens are also noteworthy.

The central courtyard is a large space that distributes the different rooms, including the large vaulted rooms that served as stables. This central courtyard is accessed passing through the main door, in which the coat of arms of the Spanish King Charles III, the first to order the reconstruction of the Stables after the fire of 1734, should be highlighted. 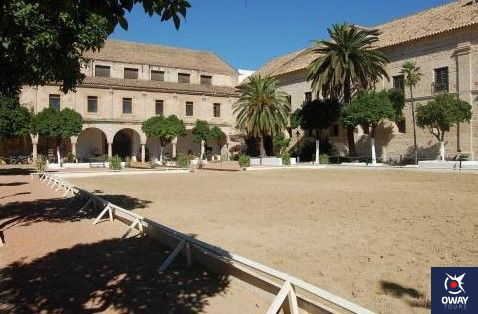 The main stable is the largest of the stables located in these stables. It has a magnificent groin-vault roof, supported by sandstone columns which in turn delimit the stables or boxes where the horses sleep, feed and rest when they are not training or exercising. In addition, this stable also houses the fifteen original 19th century horse-drawn carriages that make up the Royal Stables collection. 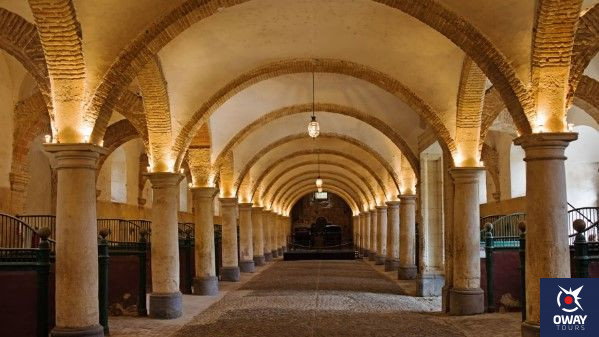 The riding arena is a large covered space surrounded by balconies on different levels where the horses bred in the stables perform exhibitions and shows of equestrian art accompanied by the best Andalusian riders. 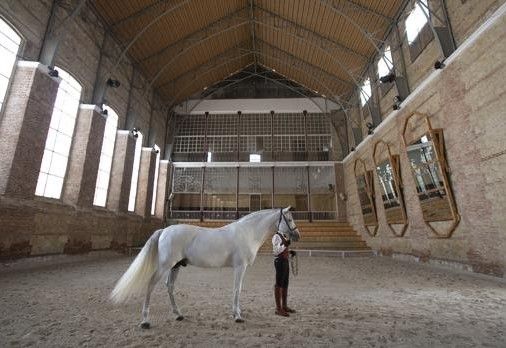 The Tower of the Wall

The Tower of the Wall of the Royal Stables forms part of the Wall of the Alcázar Viejo and separates the Stables from the Medina. Although it has had defensive functions since the 16th century, after the creation of the Caballerizas as state property, the tower has exercised administrative and historical functions, being the headquarters of different municipal and institutional bodies such as Cordoba Ecuestre, the Tourism Consortium, Cordoba Convention Bureau or the office of the Montilla Moriles Designation of Origin.

Curiosities about the Caballerizas Reales

During 2002, the Royal Stables served as the setting for the shooting of the film Carmen, by director Vicente Aranda. Thus, the stable area became the interior of the Royal Tobacco Factory of Seville. In the covered riding arena, the prison sets were raised and a grotto where the bandits took refuge. The main courtyard witnessed the degradation of the sergeant in love with the cigarette factory.

In what are now the material warehouses of the Tourism Consortium and the Tourism and World Heritage Department, the upper part facing the garden at the entrance to the Alcazar, they built the troop bedrooms and the Hall where the sergeant was judged. This area was also the workplace of the Artistic Director who received the Goya award for the film Los Otros Benjamín Fernández.

In addition, in order to be the setting for such renowned films, it was necessary to fit out a secret passage in the Royal Stables. On the east side of the main courtyard there is a door that leads to a passageway, through which one reaches the entrance staircase of the Mosaic Room and which facilitated the movement of the people involved in the film project. 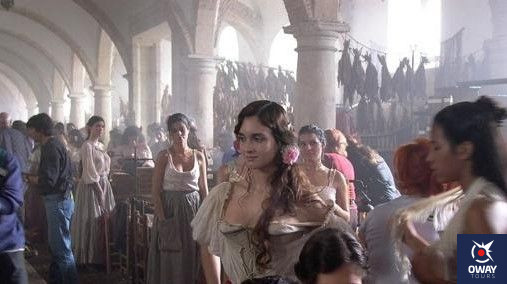 Timetable for visiting the Royal Stables

The equestrian show held in the riding arena of the Royal Stables is called “Pasión y Duende del Caballo Andaluz” and is a combination of flamenco with elements of classical and Andalusian equestrianism: hand-work, cowboy dressage, alta escuela, amazon and garrocha, spun with the history and equestrian tradition of the city of Cordoba. The prices of this show are 16,50 for adults, 11,50 for children between 3 and 12 years old and free entrance for children under 3 years old. The show takes place at 9.30pm from 10 July to 30 July, at 9pm from 1 April to 30 June and from 31 June to 21 September and at 7.30pm from 22 September to 23 April. Tickets can be purchased on the Corte Inglés website or physically at the entrance.

How to get to the Royal Stables

One of the best options to get to the Royal Stables is by using public transport, as lines 3 and 6 of the city buses in Cordoba have a stop in this tourist attraction.

It is also possible to get there on foot. Some of the nearest places of interest are the Alcázar de los Reyes Cristianos (114 m), the Caliphal Baths (138 m), the Puerta del Puente (213 m) and the Museo Taurino de Córdoba (277 m). 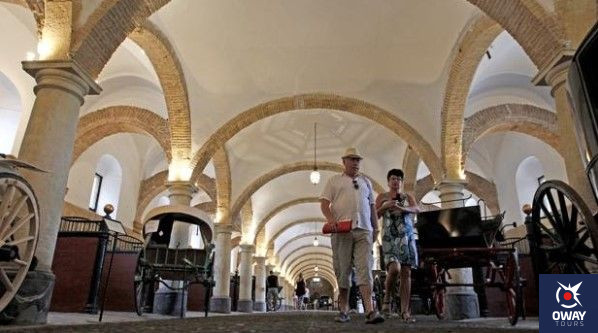