All the information about the Gibralfaro Castle | OWAY Tours

The Gibralfaro Castle is a must if you go to Malaga city, and getting there is very easy as it is in the heart of the historic centre of Malaga. From the walls of the castle you will have access to spectacular panoramic views of the entire city and, even on clear days, of the entire Costa del Sol. Going back to the time of the Phoenicians, in our visit to the Gibralfaro Castle we will make an important historical tour where we will witness all the stages through which the city of Malaga has passed. 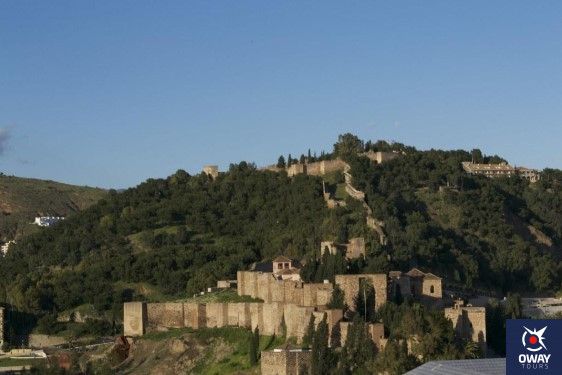 Gibralfaro Castle was built in the 14th century with the intention of protecting the Alcazaba of Malaga, which was a palatial fortification from the Muslim era. Its name, Gibralfaro, is since it originally housed a lighthouse at its peak. It was used by the Phoenicians and Romans, but it would be Abderraman III who transformed the ruins that existed before the arrival of the Romans -of Phoenician-Punic origin- into an imposing fortress, and the Nazarene King Yusuf I extended it and converted it into a fortress in the year 1340.

It is located in an elevated and continuous position to the ancient Madina of Malaqa, i.e. the historical centre of the city, and crowns the summit of Gibralfaro Mount. At its feet is the Roman Theatre of Malaga, and at the same time it is situated in front of the Customs building, now the Museum of Malaga. In a few meters we can observe the union of different cultures: Roman, Arab and Renaissance.

During the conquest of the Catholic Kings in 1487, the castle was heavily besieged for an entire summer. Finally, Fernando the Catholic took it as a residence, while Isabel I of Castile decided to place her residence in the city. Fernando took the figure of the castle to configure the coat of arms of the city. For a long time, it was considered one of the most impregnable fortresses in the whole of the Iberian Peninsula.

Made up of two lines of wall and eight towers, the outer wall has a connection with the coracha through zigzagging walls, which extend the connection between the castle and the Alcazaba. Following the interior wall, you can walk the patrol path around the perimeter of the fortress.

The castle is divided into two parts, an upper part known as the main courtyard, where we can find the current Interpretation Centre where information is provided on the history of the castle and its occupants, the main tower, 17 metres high, the Phoenician well and the baths. On the other hand, the lower part, known as the parade ground, housed the troop barracks and stables, the White Tower, which faces northwest and still has a cistern inside, as well as outbuildings and warehouses.

Its restoring architect was Leopoldo Torres Balbás, and he mentioned that the Alcazaba was the prototype of military architecture of the 11th century Taifa period, characterised by a double walled enclosure and many fortifications. Its only parallel is the castle of Crac de los Caballeros, a Syrian fortress that was built by the Crusaders between the 12th and 13th centuries.

Nowadays, the castle allows access to visitors, and from the homage tower we can have magnificent views of the whole city of Malaga, and even see some mountains of the African Rif Mountains and the Strait of Gibraltar.

The Castle of Gibralfaro was classified as an Asset of Cultural Interest, within the category of Historical and Artistic Monument in 1931. In the Interpretation Centre we can find dan exhibition that explains, through different elements, how the military daily life was developed in the castle. It houses military uniforms from the regimes of each era, from the 16th to the 20th century. It also houses a model of the city of Malaga and the monumental complex of the Alcazaba and the castle. 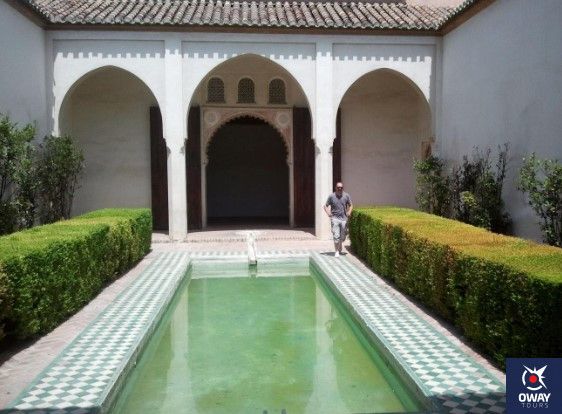 To visit the Castle of Gibralfaro we find different prices. The normal visit costs 2.20 euros, the joint visit that also includes the Alcazaba is 3.55 euros, the reduced ticket costs 0.60 euros, and is for children from 6 to 16 years, students, retirees, and pensioners. There is also a fee entrance on Sundays from 14:00 until closing time. 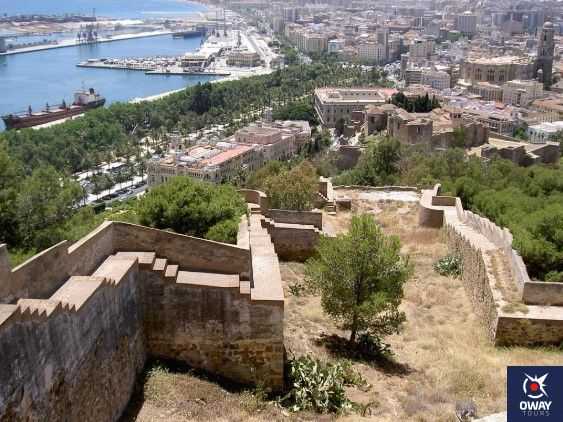 How to get to Gibralfaro Castle

Gibralfaro Castle is in the heart of the historic centre of Malaga, so finding it is not difficult. It crowns the top of Mount Gibralfaro, and access is possible through the entrance that is set up next to the Roman Theatre.

The Alcazaba and Gibralfaro Castle complex that we see today is the result of a very long historical process which is divided into four stages: the Islamic period (10th to 15th century), from the conquest of the Catholic Kings to the 18th century, its abandonment and deterioration in 19th and 20th centuries, and its recovery as a Historic-Artistic Monument, from 1930 to the present day.

According to some Muslim historians, it may have been the king of Berber taifas, called Bedis ben Habus, who ordered the construction of the Alcazaba, using marbles, columns, and statues from the adjacent Roman Theatre. However, these studies have been highly questioned since it has been claimed that, instead of being an ex novo construction, it was a restoration of the ancient walled enclosure of Phoenician-Punic origin.

During the conquest of the Catholic Kings, the fortification was used as an impassable Muslim bastion for the taking of Malaga. The siege began on May 5, 1487, and didn’t end until August 19 of the same year, when the Catholic Kings finally entered the city raising the cross and banner of Castile from the tower of the Alcazaba. It was at this time that Fernando the Catholic delivered to Malaga the image of the Virgin of Victory, a German carving which was given to him by the Emperor Maximiliano I, and which became from that moment on the patron saint of the city.

Throughout the long process of deterioration, the citadel suffered various disasters, including an earthquake in 1680, or the bombing of the city by nine French ships in 1693 in the Nine Years’ War. In 1794, during the Roussillon War, it was used as a prison for French soldiers, and the Royal Hospital of San Luis was built by order of the Secretary of State Manuel Godoy. 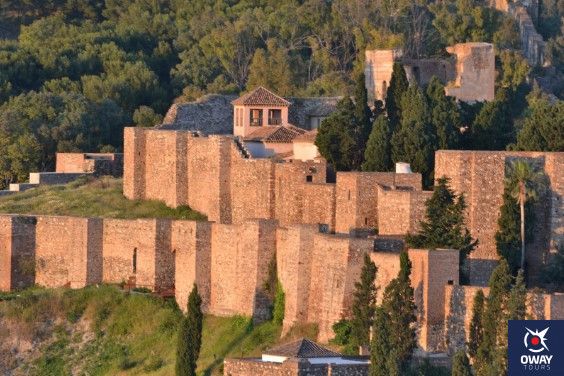