This is one of the most emblematic spaces in all of Seville. In fact it is very unlikely that you will not be attracted by the call of its high towers. Even if you manage to escape from its influence here we bring you a whole range of details so that you decide to walk around its famous tiles. 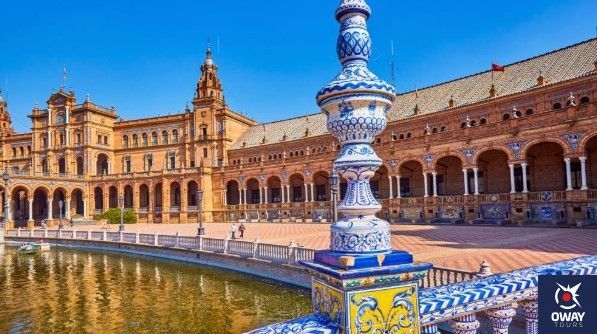 History of the Plaza España in Seville

Before starting with the actual explanation of the architectural complex, we must talk about the enclave where it is located. Unlike other squares, which are generally open spaces where several streets converge, Plaza de España is located within the gardens of Maria Luisa. This is one of the main lungs of the Andalusian capital and also its first urban park. This enormous green space was donated to the city by María Luisa Fernanda, as it belonged to the land adjacent to her residence. The Infanta and her husband, the Duke of Montpensier, had to leave the capital in 1848 due to the political differences they had with the Spanish monarchs. When they settled in Seville they decided to do so in the San Telmo Palace. To adapt the space to their taste they hired André Lecolant as landscape designer for their gardens, to which they added the estates of La Isabel and San Diego. As we have already said, this green oasis became municipal property in 1893. However, it was not until 1914 that it was decided to open it as an urban park, under the name of its former owner, who was already dead at the time.  It was also in this year that the construction of Plaza España began, the first modification to Lecolant’s original design. It was feared that the construction would not be completed in time due to the slow progress of the work. Plaza España was the central element of the Ibero-American Exhibition that was to be held in Seville in 1939. During the 19th century there were several examples of this type of fairs that were intended to show the technological and artistic advances as well as the traditional characteristics of the different countries.

They were known as universal exhibitions precisely because they included representative pavilions of each invited nation. In the case of the exhibition in Seville, the idea was to present the twinning of Spain with its former colonies and some countries with historical relations such as Portugal, Brazil or the United States. In fact, in the vicinity of the park it is still possible to visit some of the buildings created for this purpose and which today serve other purposes. For example, the former Colombian pavilion is now the consulate of that same nation. The delay in the completion of the work was due to the modifications made by the architect in charge, Aníbal González. By 1925, only 4 years before the inauguration, and seeing the slow progress of the process, Primo de Rivera, head of state and dictator at the time, decided to impose a royal commissioner, José Cruz Conde. A year later Aníbal González would resign and his design would be finished by Vicente Traver. It must be said, that the exterior and the fundamental parts were already done but there was still a lot of work to be done in the interiors and the fitting out of the spaces. 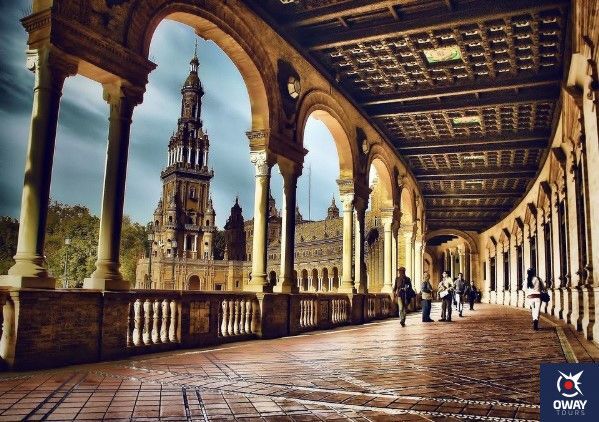 Plaza España, as the central axis of the Ibero-American Exhibition, had to represent on the one hand the host country itself and on the other hand that idea of union. That is why the winning design, by Aníbal González, presents a semi-elliptical square crowned by two towers. In the large curved space that is created we find a series of benches with scenes representing each Spanish region. Hence its name, Spain Square. This square gives a sensation of welcome due to its great openness, which is compensated by the two wings that surround it as if in an embrace. Inside it we can make a journey through each region that constitutes the country.To emphasize this symbolic function of the square as Spain, a whole amalgam of architectural styles are used which are key to its historical development.  Thus the design is very inspired by the Renaissance, especially in the treatises of Andrea Palladio but may also remind you of the Bernini project in St. Peter’s in the Vatican.In addition, the coffered ceilings supported by marble columns and the decoration with polychrome tile medallions, very typical of the Sevillian tradition, also respond to this style.  However, the high towers have a much more baroque design and the use of exposed brick reminds the buildings of the múdejares. 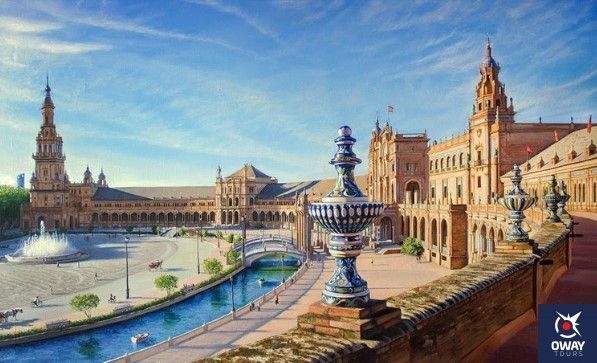 Evidently a complex with the characteristics of Plaza España has gone through many vicissitudes and disagreements. For example, there is an alphabetical distribution of the provinces on the benches, but this is skipped when we arrive in Navarre, which becomes Pamplona. The conflict derives from the fact that the imagery representing the death of García IV was seen as too violent and clashed with the idea of giving a peaceful image of unity. There were also problems with the heights of the towers because they rivaled the Giralda, which is the most representative postcard of the city, which won it the opposition of the Academy of Fine Arts. Continuing with the benches there are currently 50 provinces in Spain but here you can only find 48. This is because Seville does not appear as it would be an overrepresentation as it is already in the four murals of the square. In turn, the Canary Islands was a single provincial unit until 1927. The interesting thing is that even today this space continues to fascinate many people and the film directors were not going to be less. The square has served as a film set for national films such as Manuel and Clemente (1986) or the series Down There (2015-2019) but also for large blockbusters. This has been the headquarters of the British army in Lawrence of Arabia (1962), the background against which troops parade in The Wind and the Lion (1975), where Anakin and Padme walk in Star Wars Episode II: Attack of the Clones (2002) or a dictator’s mansion in The Dictator (2012). Be careful because in the last two, modifications were made to the scenery with digital means. In short, there are many more things that can be said about Plaza España, such as the fact that Aníbal Gonzalez has been watching it for all eternity since 2010. 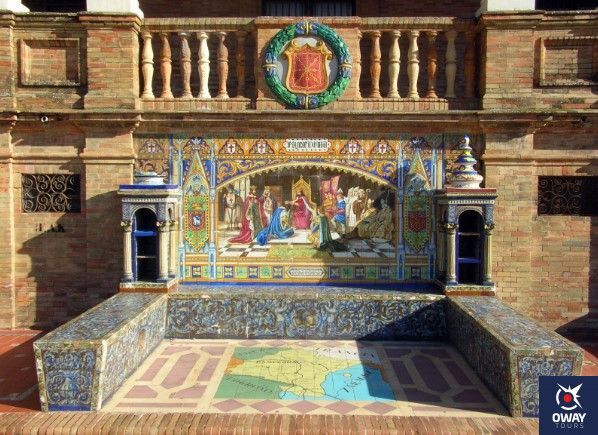