The Albaizin quarter is considered a World Heritage Site, so it is a must to walk through its streets when we approach Granada. While touring the Ribera del Darro it is essential to stop at the Baños del Nogal, commonly called El Bañuelo. A hammam from the Zirí period that will allow us to relive all the history and tradition of this beautiful city. 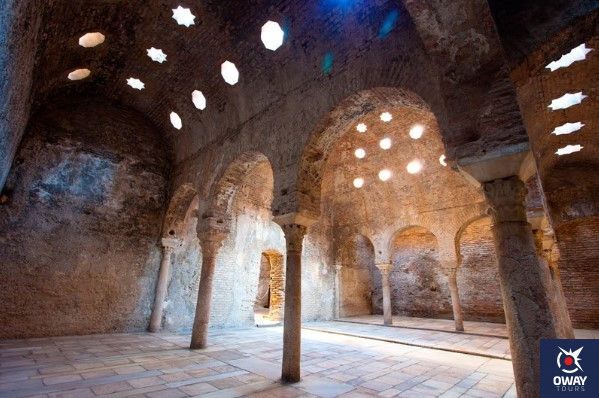 The most widespread hypothesis is that the Bañuelo was erected by order of the vizier Ibn Nagrela under the rule of Badis, in the 11th century. However, some authors believe that the construction techniques used in the building, concrete and brick tapial forming buttresses with reinforcements in the openings, would respond better to the twelfth century. Although independently of the academic debates it is unquestionable that its construction responds to the Zirí period specifically to the expansion of the population of the eastern part of the city. Its location on an important public thoroughfare next to the entrance gates implies the importance of the building. The area was densely inhabited so surrounding the Bañuelo there were several shops. Their social function was to serve as public baths for the community. For the Muslims the cleanliness and the water were fundamental since it was not possible to pray without having been purified. Here the neighbors of the zone came to be able to wash themselves, to cut their hair or to receive massages. In addition these spaces served as a point of social cohesion since important groups of population met in the building. There were different schedules for men and women, they came to these places once or twice a month also on the occasion of the wedding celebrations. We can see today how its structure was made to house some bathrooms. Thus the different rooms were covered with brick vaults with octagonal or star-shaped lights. These had a triple function since they served to illuminate but also to ventilate a building with a high calorific power and at the same time they lightened the weight of the roof. The walls were made of a mortar (fatty lime with sand and stones) that allowed the isolation with the outside in addition they were covered with stucco and painted. A complex ceramic channel ran through the building allowing water to enter and smoke to escape. Curiously, the Bañuelo, unlike other baths from the Muslim period, survived the conquest process. The only modifications that were made were the construction of a private house and a public washing place. 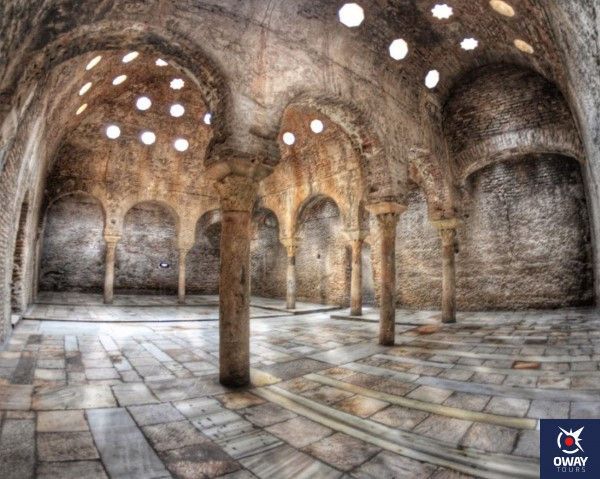 Actually the hamman (Arabic baths) are the Muslim adaptation of the Roman thermal tradition. For this reason these establishments reproduce the scheme of the old thermal baths. For it through a rectangular plant the different spaces are arranged. Access to the body of the building is through a patio with a small pool. Afterwards, there is a hall with a half-barrel vault that allowed a place to rest and to change. This rectangular room gives access to the restroom. It is an elongated space with rooms on the sides separated by horseshoe arches. This is the cold water room where towels and wooden sandals (chapines) were given to insulate the feet from the heat. Then there are two other similar rooms that correspond to the warm room and the heat room. Finally, there are the boilers that currently lack a roof. 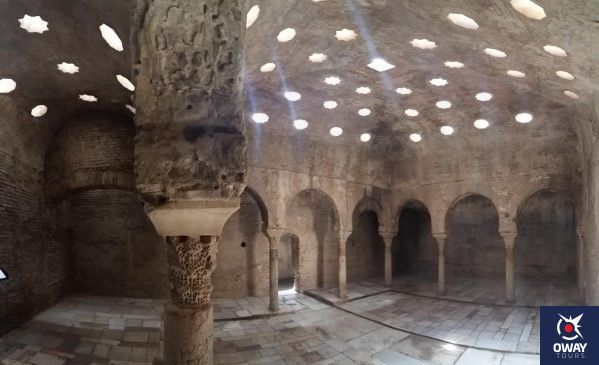 It’s the largest room in the building. It is covered with a skylight vault, which is characterized by its curved shape covering the measure between walls or pillars. The room is illuminated by octagonal skylights. Unlike other similar bathrooms, this room is composed of three galleries, separated by horseshoe arches, around the main space. In addition, the columns of the arches reuse older capitals from the Roman, Visigoth or Caliphal periods. 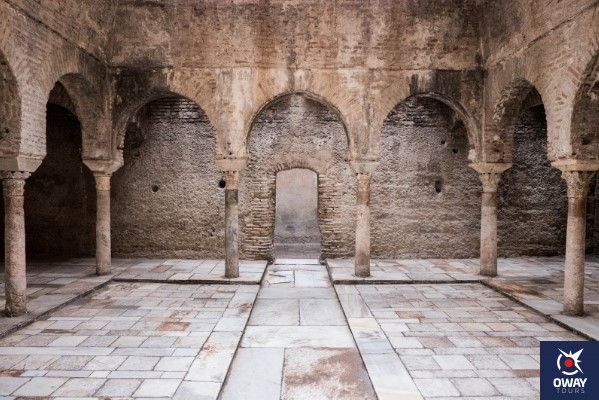 It’s the last of the covered rooms. It is distributed in three spaces separated by a central wall with three holes created by semicircular arches. Two of them were individual baths for immersion in hot water and in the middle there was a boiler. 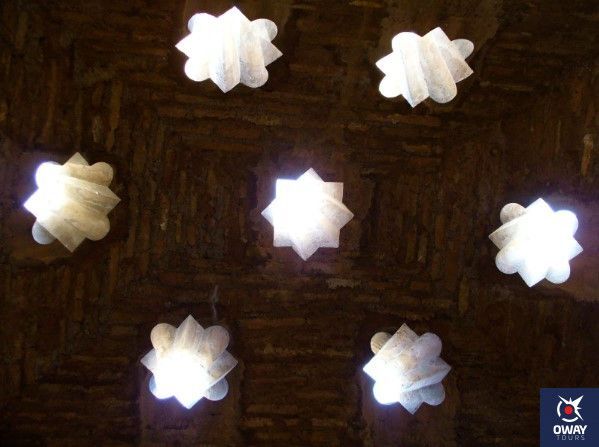 El Bañuelo has been known by this name since the end of the 19th century because it is much smaller than the royal baths of the Alhambra. That is why the diminutive -elo was added to the word “baño” (bath). Although during its long history it was given different names. In medieval times it was called the Walnut Bath or ḥammān al-Ŷawza, then it was known as the Palace Bath and later as the Guadix Gate Bath. It is one of the oldest buildings in the city and one of the best preserved spa complexes. This is quite a challenge since most of the Muslim baths were destroyed.

After the conquest of the Catholic Kings they were gradually ceased to be used until their complete disappearance in the times of Felipe III. Contrary to what is believed, this is not because Christians were more careless with their hygiene but more because of a political and social issue. The hammam was a meeting place of great symbolic importance for the Muslims and therefore could not be preserved. The propaganda of the time justified it by relating these establishments to the alleged Muslim depravity, even comparing them to brothels. 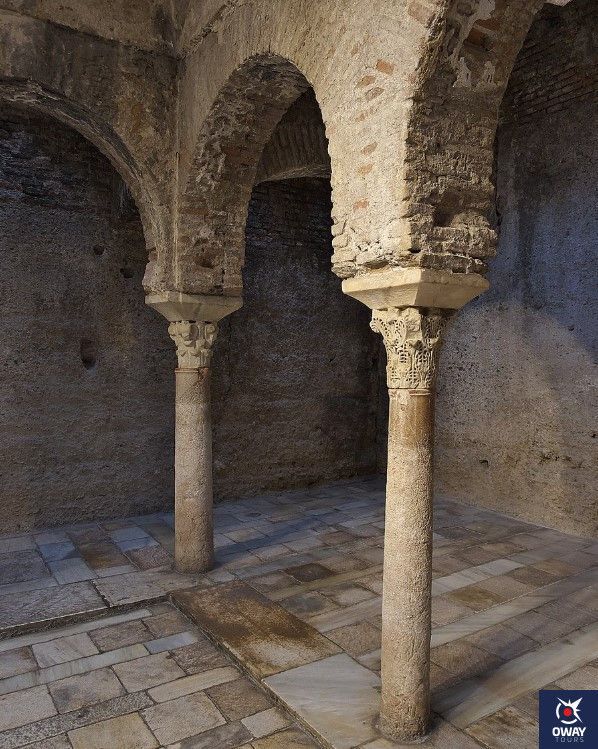 How to get there, prices and timetables

You can visit this monument in the Carrera del Darro, near the Plaza Nueva and in front of the Puente del Cadí. You can reach it perfectly on foot from the historical centre of Granada or by bus. The lines you can take are C31 (Albaicin-Centre), C32 (Alhambra-Albaicin) and C34 (Sacromonte-Centre). The name of the bus stop is evident as it is called ‘El Bañuelo’. Visiting hours are from Tuesday to Saturday from 10:00 to 14:00 free of charge. However, for 5 Euros you can buy a General Golden Double Ticket. This is a cultural and tourist itinerary organized by the Royal Board of the Alhambra. It is understood that through the fame of the palaces, the rest of the Hispano-Muslim monuments will be known, since the declaration of World Heritage includes the Albaicin quarter. So the ticket includes the general day visit to the Alhambra, the Corral del Carbón, the Bañuelo, the Palace of Dar al-Horra, the Casa Morisca (C/ Horno de Oro), the Casa del Chapiz and the Casa de Zafra. 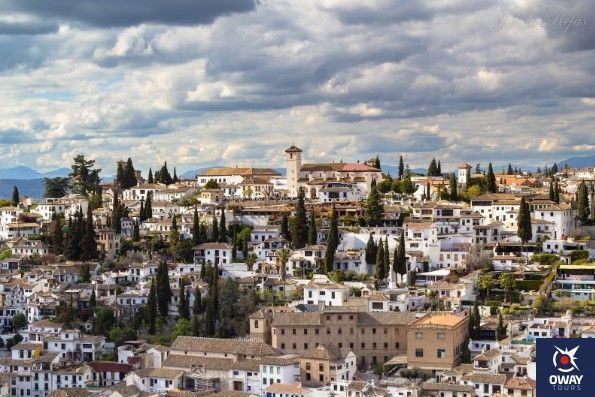