All the information about the Patio de los Leones | OWAY Tours

The Palace of the Lions or Palace of the Ryad al Said, also known in the Arabian sources as the Palace of the Happy Garden, occupies the central position of the fortified enclosure of the Alhambra. It represents the peak of Nasrid architecture, coinciding with the reign of Muhammad V (1362-1391).
The lion fountain, symbol of the sultan’s power, is not only the most representative element of its decorative richness but also of the complex and sophisticated hydraulic system of the palace enclosure.

The conclusions of the research work carried out on the palace seem to clarify that Sultan Muhammad V built his palace on previous constructions, possibly belonging to a palace and garden, dating from the time of the fifth Nasrid Sultan, Ismail I (1313-1325), whose layout undoubtedly influenced the architectural orientation. The palace has a very elaborate design with a rectangular courtyard, distributed according to the model of a cruise garden, equipped with a large central fountain and four orthogonal channels. It has porticoes on all four sides and projecting pavilions on the two smaller sides. Its main nucleus is on the north side, called by the Qubba Mayor or the Hall of the Two Sisters. Its arches and colonnades are noteworthy and surround the entire space. The established decorative rhythms respond to a subtle combination that is complemented by the chiaroscuro of the plasterwork creating an atmosphere charged with exoticism that has been valued by numerous travellers and artists over time.

The patio has arrived today with the configuration of a transept and central fountain, like this one, few remains in the world of the medieval Islamic world. Proportionally perfect, it adds visually to the courtyard a gallery of columns that has made it one of the most universal and admired examples.

The fountain of the lions occupies the central axis of the palace, around which the different rooms open. It consists of twelve sculptures of fountain lions, distributed in a radial way that seem to “hold” in their backs a big dodecagonal cup of 2.56 meters in diameter. The cup, consisting of a central spout and epigraphic, geometric and vegetal decoration, rests on a cylindrical base made of limestone. The central piece of the spout is a replica of the original which was removed in 1981 for study. It contains eight holes distributed around the perimeter that correspond to the eight largest drains located underneath them. In this way, the water that pours from the fountain is collected in the drains, without overflowing from the cup, establishing a gentle harmony with the water that flows from the lions’ mouth pipes, producing a soft murmur of water. 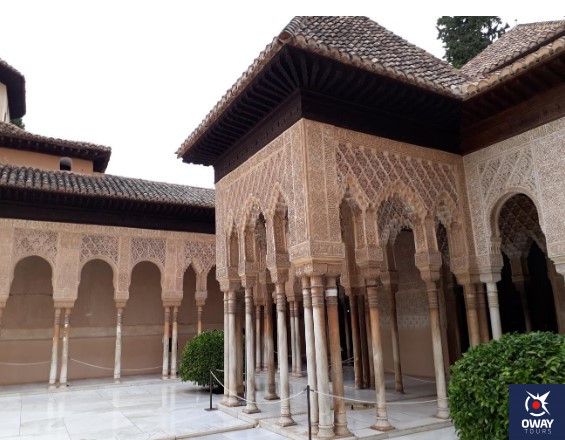 Studies from a historical-artistic investigation of 2010-2011, have shown that the configuration of this palace did not have a garden, and that its pavement was very possibly made of white marble from Macael. At the end of the 16th or beginning of the 17th century, it was probably replaced by coloured glazed ceramic flooring that was to be maintained until 1810 when it was removed to plant a garden during the French occupation. This produced numerous filtrations by the irrigation water and led to its elimination and replacement by earthenware pavement until 1913 when the intervention of Modesto Cendoya took place, who progressively replaced the earthen surface with gravel from river stones.

The twelve lions of the white marble fountain of Macael take us to the metaphorical image of the power of the palatine city of the Alhambra. It represents the milestone in which the complex evolutionary process of engineering and aesthetic ideas culminates, where science and art coexist perfectly. It emphasizes a meticulous and detailed process that continues in the execution of the lions, unique in their species but derived from models from the ancient world, mainly Mesopotamia and the Hittite world. Although the figures of the lions appear to be the same, in reality they are different from each other, and they are found with their backs to the source in an intentional symbolic attitude. In an alert attitude with their jaws clenched, their tails folded, and their ears raised, they move away from hieraticism.

Each block of marble used in the lions was carefully chosen in the quarry by the carver, with the intention that the natural veins of the stone would match the rounded shapes of the lion’s musculature and as a contrast to the animal’s coat.

The fountain basin is a unique large piece, weighing 2.10 tons without water and 3.30 tons full. Originally it must have been transported from the quarry to the courtyard with the emptying of the container, the stitching and the finishing touches to its chiselling in situ. The epigraphic verses surrounding the fountain cup offer a metaphorical language. The promoter sultan is alluded to as the embodiment of power and the sacred lineage of the Ansares as protectors, so the symbolism of the fountain as an image of power and the lions as representatives of the lineages that protect and sustain it cannot be ruled out.

Without doubt, the lions that give name to the palace and the courtyard, of incalculable value, are the “crown jewel” of the Nasrid monument. As his historical-artistic studies progress, more details emerge from his physiognomy.

In some of the numerous transformations of the Fountain at different times in the history of the Palace, it has been adapted to different aesthetic tastes, such as the addition of a second cup in the 17th century with a clearly less artistic quality, which today is moved to the Garden of Adarves together with its fountain. 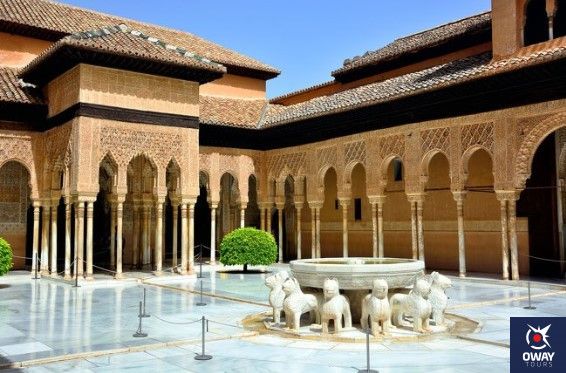 Felix, Melanie, Olivia, King Gudú, Calimero… are some of the names that each of the lions of the fountain receives in a personal capacity. The restorers have given them names that identify with the different gestures and ferocity of each of the cats.

The fountain cup has a striking epigraphic decoration that speaks of the blessing of its promoter Muhammad V when he built the palace and how he distributes favors to his subjects.

The Alhambra is one of the places you have to visit at least once in your life, but the truth is that its extensive perimeter and its undefined beauty will make you want to repeat your visit. The Alhambra complex has the same access hours as the palaces, gardens and Generalife. Its opening hours are from 8.30 a.m. to 6 p.m. in winter (from 15th October to 31st March) and to 8 p.m. in summer (from 1st April to 14th October). Open every day, I leave on 25 December and 1 January. 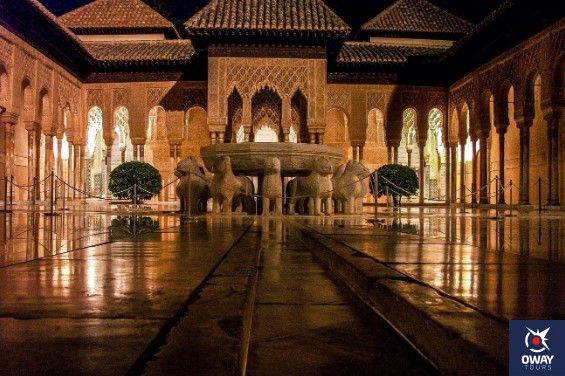 There are several options we can pay for our visit to the Lions Palace and Patio. Please note that tickets must be purchased in advance of our visit, either at the box office days before or online. There are many visitors who frequent the facilities, so it is sometimes difficult to find them available weeks and months in advance. There are also two options for visits, daytime and nighttime.