All the Information about the Malaga Cathedral | OWAY Tours

This is one of the most characteristic postcards of the city and one of the monuments with the highest artistic quality. Therefore, it is highly unlikely to pass by the city and not to deign to walk around its sacred grounds.

History of the Cathedral of Malaga

Like many other sacred buildings of the time, the construction of the Cathedral of Malaga is intimately related to the process of Christian conquest. Thus, when the Christians occupied a city, they got rid of the main symbols of Muslim power (aljama mosque) and built their own (churches). Therefore the present temple was built on the remains of the Great Mosque, although its Patio de los Naranjos was preserved. The raising of the building was ordered in 1487 a few days after the Catholic Kings arrived in the city and consecrated it to Santa María de la Encarnación, to whom they were devoted. This distinguished monument represents one of the best examples of the Spanish Renaissance, although the work lasted so long, from 1525 to 1782, that a mixture of various styles can be seen. In fact, the main structure of the Cathedral is late Gothic. However, the participation of Diego de Siloé and Andrés de Vandelvira in the project resulted in a characteristic and evident turn towards the Renaissance. Also in the 18th century, elements were added that were already in vogue at the time, that is to say, baroque. It was not until 1768 that it began to be used for worship and even then the building remained unfinished. 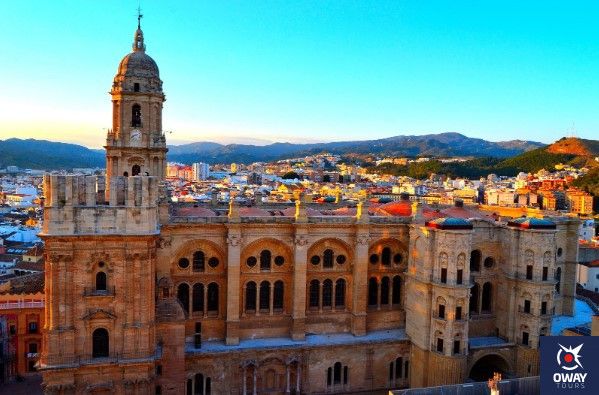 Parts of the Cathedral of Malaga

The Cathedrals are the most imposing temples of Christianity and as such they become spaces with a great variety of interesting elements. The great time it takes to finish them causes them to mix different architectural tastes. In addition, they can be seen both as continents, that is to say, for what they are structurally, and as containers, all the works of art that are housed inside them. From the walls to the ceilings everything is decorated to demonstrate the power of the Church. Altarpieces, sculptures and paintings help to reflect its preponderance. Here we will point out the most particular parts of this sacred building.

The main facade is divided into two heights in three streets separated by Corinthian columns on high bases. On the top floor the columns are made of reddish marble flanking three arches. Those of the main door are Solomonic and different medallions appear above the doors. On the sides these represent the patron saints of Málaga, San Ciriaco and Santa Paula, while the central one represents the Annunciation of the Lord. The latter is the work of Antonio Ramos made in 1743. The Renaissance doors of the transept have two towers with balconies and semicircular doors, the capitals have archivolts and a body with three niches. The central one is semicircular and has lintels and the lateral ones are of Palladian composition, which is the architectural style influenced by the work of the architect Andrea Palladio who is one of the main references of Siloe. The Sagrario Front is also remarkable, with a semicircular pediment and a curved gable. Its tympanum is crowned by the Episcopal shield. The side walls are supported by buttresses finished off with classical cornices and two bodies of windows. 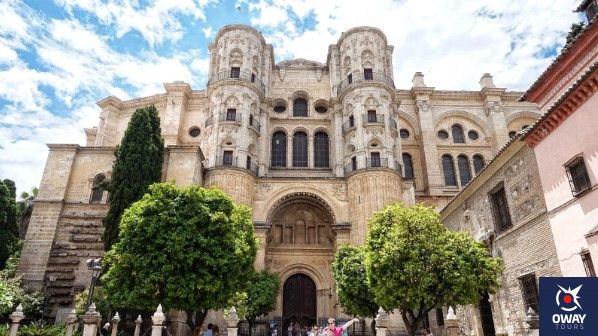 The interior of the cathedral

It has a rectangular floor plan and is divided into three naves, the central one being the widest but all of them of equal height. The height of the building is one of its most outstanding aspects since it also implies the abandonment of the Gothic staircase of the three naves by incorporating pillars on pillars to raise the construction even more. It is covered with vaults decorated with palms and caves, a name that derives from the word caves as it refers to a type of decoration found in Roman caves in the fifteenth century. All around its perimeter it is surrounded by side chapels. The High Altar was created by Diego de Vergara in 1541 in a semicircular shape and covered by a ribbed vault. The apse is from the 16th century and is not profusely decorated but has large stained glass windows that allow the entrance of colorful light. In terms of furniture art, the cathedral choir stands out for its baroque woodwork. Various sculptors worked on it, but the most outstanding is Pedro de Mena. Also interesting are the 18th century organs made up of 4000 pipes. 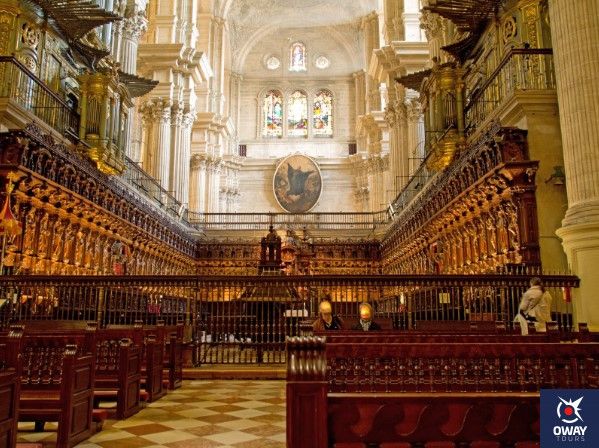 From 2015 it is possible to visit the roofs although they have a higher price than the total of the Cathedral. It is a highly recommended visit since it allows to contemplate one of the most interesting panoramic views of the city. From the top of the building you can see its most emblematic buildings including the Alcazaba, the Gibralfaro and the roof and tower of the monument. The visits last approximately one hour and are carried out with a guide included in the price. However, bear in mind that there are 200 steps, which means that people with breathing difficulties, reduced mobility, pregnant women or babies will not be able to climb up. In addition it can be very overwhelming for those who suffer from dizziness and claustrophobia.

Schedules and prices to visit the Cathedral of Malaga 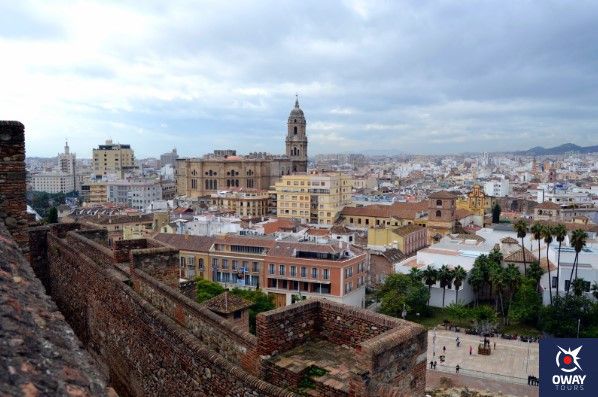 Curiosities about the Cathedral of Malaga

The Cathedral is commonly nicknamed ‘La Manquita’ (The Little Man) because it is incomplete and has only one tower. Depending on the version the funds for the construction were destined to the American War of Independence or to the Málaga-Vélez-Málaga road. What is clear is that the Napoleonic Wars and the various crises caused the works to be paralyzed, leaving the monument with only one hand. Even so, its tower is so high that it is only surpassed by the Giralda tower, being until 2012, with the raising of the Torre Pelli, the second highest building in Andalusia. Anyway, we are talking about how high it is, we have to say that in the national territory only the Cathedral of Palma has higher vaults. For all this, it is among the fifteen European temples with the highest naves. Anecdotally, its atrium was used in 1959 for the feature film Moment of Danger by László Benedek, starring Trevor Howard and Dorothy Dundrige, and in 2005 it was also used as a plate for The Bridge of San Luis Rey, starring Robert De Niro, Kathy Bates and Harvey Keitel. 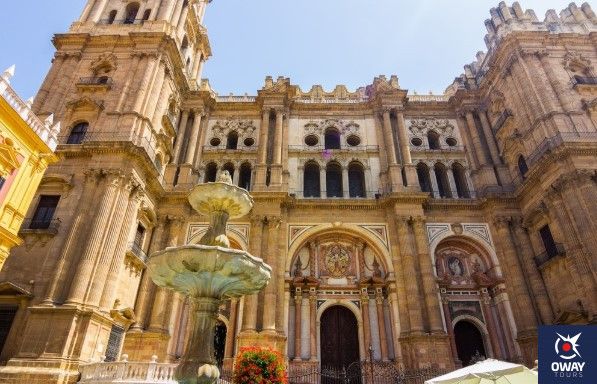