All the information about the Colomares Castle | OWAY Tours

Located about 9 kilometers from Benalmadena, in the province of Malaga, we find this original and beautiful construction, today not well known to tourists, but that gradually became one of the biggest tourist attractions of Malaga. Want to know more about Colomares Castle? Well, read on.

History of the Castle

Although at first glance it may seem like a medieval castle, the truth is that it was built in the twentieth century by the architect Esteban Martín between 1987 and 1994. Its original design is due to the mixing of various types of architectural styles (neo byzantine, neo-Gothic, neo-Romanesque and “neomudejar”). The infrastructure is located very close to the sea, and it was sent to build with the aim of paying homage to Christopher Columbus and the Discovery of America and also to the Catholic Monarchs. Currently, only the outside of the Castle is visitable, but this is no problem, because it has so many elements that from the beginning to the end of the tour you will immerse yourself in a story told by the monument itself.

In addition to its obvious spectacularity, the Castle holds two Guinness Records: one for being the largest construction designed with the aim of commemorating Christopher Columbus and the other for having the smallest chapel in the world inside. 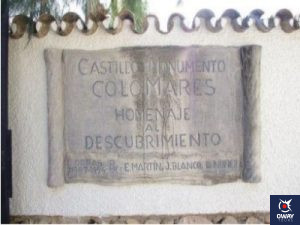 Parts of the castle

The entire structure of the castle is composed of bricks and stones, in addition, different bronze pieces were added in different areas of the enclosure to recall the time of the Discovery of America. Not many have managed to visit the interior, but the lucky few emphasize the careful way in which it was built, and comment on the idyllic way it has to transport you to a specific place in history thanks to its structure, almost as if it told you the story that has wanted to be told with its construction.

It’s perfectly structured design is organized around 16 points that tell the story it seeks to honor. 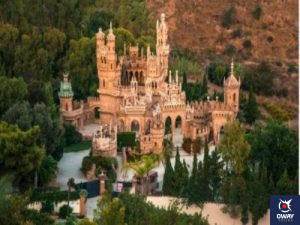 In honor of the three ships that accompanied the navigator on his journey across the Atlantic to the “New World“, we find the images of each  or of himors embodied in various areas of the castle. La Niña  is located at the highest point of the monument, La Pinta is located on the main facade of the castle and the Santa Maria is isolated from the other two naves, because as the story tells, it sank during the expedition. 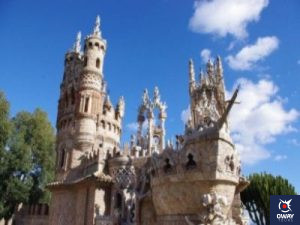 The Castle has many symbolic elements, but without a doubt one of those that stand out the most is this figure created in detail to represent the dream of Christopher Columbus, the search for the eastern waters.

The church or chapel

Collected in the Guinness Book of Records as the smallest church in the world. So much so, it would be practically impossible to celebrate a mass within it. It is dedicated to St. Elizabeth of Hungary, patron saint of the Teutonic order. 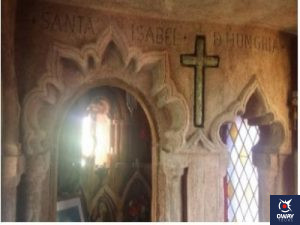 Representative symbols of the Catholic Monarchs and the Three Cultures

In the Castle we will find different symbology in honor of the Catholic Monarchs, who allowed Christopher Columbus to embark to the Americas.

And we also come across various elements representing the three religions practiced in medieval Spain: Christianity, Judaism and Islamism.

It was built in honor of the death of the character the castle honors, Christopher Columbus. Inside we find a small room, decorated with a beautiful Gothic-style rose window and an honorary altar. It was installed with the intention of letting the remains of the navigator rest in it. 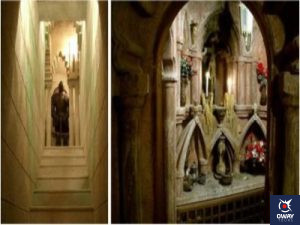 Due to the seasonality of Malaga, the Castle has different visiting times depending on the time of year at which you want to visit it:

The Castle is open to the public from Wednesday to Sunday.

In addition to its obvious spectacularity and the privileged location in which it is located, you will spend a good time in this treasure of the Costa del Sol due to the competitive prices under which it is offered.

How to get to the Castle

There are several ways to get to the Castle, depending on where you are.

If you want to make the most of your visit, we recommend our guided tours of Malaga and the guided tour of the Caminito del Rey.

The price of the buses is the same as indicated above. 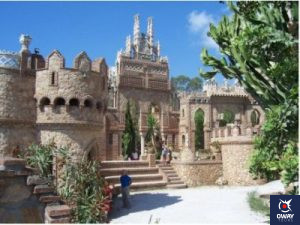 Curiosities about the Castle