All the information about the Bullring of Ronda | OWAY Tours

The Bullring of Ronda

The increase in population in the 18th century led to the construction of the New Bridge and its connection to a new social space where the Bullring will be built. This is going to be one of the most important periods in Ronda. The Plaza de Toros is going to be the link between the old and the new city, and where a wide avenue, then called Avenida de San Carlos, and today called Virgen de la Paz, starts, reaching the church of La Merced. 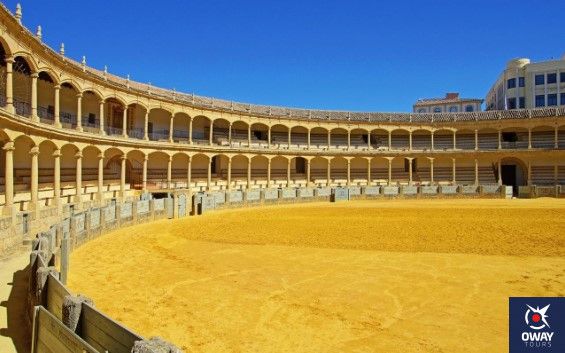 History of the Bullring of Ronda

The Plaza de Toros de Ronda was built on the then free building site, on a flat area away from the town. This square is one of the oldest in Spain. It was built in the 18th century at the expense of the Real Maestranza, whose origins go back to the time of Philip II and the Brotherhood of the Noble Brothers of Sancti Spíritus with the main function of being trained in the handling of the horse and weapons. This Brotherhood, can be considered as the closest antecedent of the Real Maestranza of Ronda. The Maestranza was composed of the most illustrious titles and knights of the city and others of Castile and the rest of the Kingdom. They had their own uniform and weapons.

Ronda had the faculty to celebrate twice a year the bullfighting festival, in spring and autumn, as in Granada, investing its proceeds in the expenses for the conservation of the institute and dowries of poor orphans and other public works. It was in 1769 when the Town Hall gave the land near the Tagus for the construction of a stable and permanent bullring. At first, the monarch authorised a removable wooden bullring at the fairs, but finally he gave in for a definitive construction.

The work was paid for at the expense of the masters, without the participation of the neighbourhood. It was inaugurated in 1784 before its completion, and an avalanche of people knocked down the unfinished part, causing some deaths and injuries. The following year the works were completed and the two bullfighting festivals that had been celebrated continued, despite the fact that in many towns of the Kingdom it had been forbidden.

The bullring has a circular shape within the 18th century aesthetics, based on the Roman amphitheatres. It has a double arcade of lowered arches, the keystones of which are highlighted by cut-out plates on slender Toscan columns topped by flames. The royal box is framed by fluted columns and a decoration of the old bullring of the Puerta de Alcalá in Madrid. The second body is lower and has an iron parapet. It contrasts the exterior of the square, which shows a more popular character with the scaled and smooth walls, broken only, by some modern holes for the most part, in comparison with the interior, where the use of ashlar stands out powerfully in the white walls. The main doorway follows a classicist pattern and is characterized by its monumentality and decorative richness. The courtyard of stables, riding schools and other facilities is accessed through a more baroque doorway, open to the same avenue, which has a semicircular arch, a mixed pediment and pinnacle finish.

The building has undergone various reforms and restorations over the years. In the 19th century, firmness studies and some restorations were carried out. The most important one was in 1816 with the transfer of the bullpen cover that was in front of the Maestranza street and was condemned by the Espinel theatre, then still standing. At present, some rooms in the square have been adapted to become a bullfighting museum. And in 1985 it was declared an Asset of Cultural Interest. 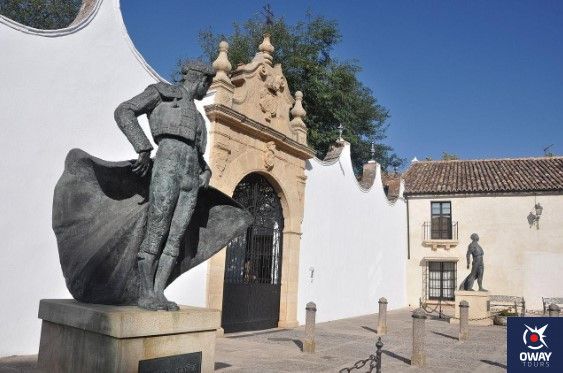 The bullfighting museum of Ronda takes place under the shade of the trees. The museum’s discourse takes us through the mythical origins of bullfighting in universal culture, its special roots in the Iberian Peninsula, and the evolution it has had here, from popular bullfighting and the real functions of the chivalrous bull, to becoming a regulated spectacle. It is complemented by testimonies of great caliber in the city, the important dynasties of bullfighters, the Romero and the Ordóñez.

The collection brings together a rich collection of paintings, sculptures, graphic arts, textiles, tools and objects, historical documentation and contemporary art pieces, with all the information necessary to enter the world of the bull, placing each work in its context.

This room dedicated to the history and evolution of bullfighting is part of a process of rehabilitation and reform of the complex that took place in 1997. This room came to replace the Bullfighting Museum which for many years fulfilled its function, but without a museological and museographic discourse in accordance with modern concepts. 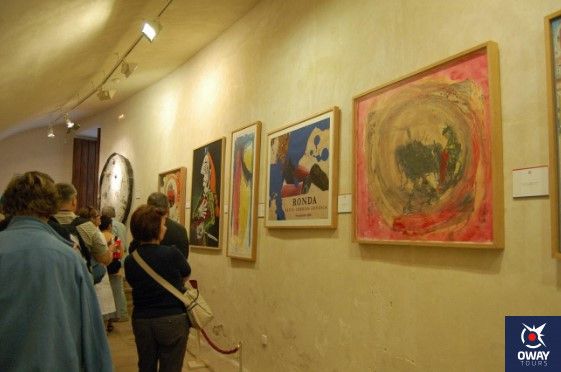 Schedule to visit the Ronda Bullring 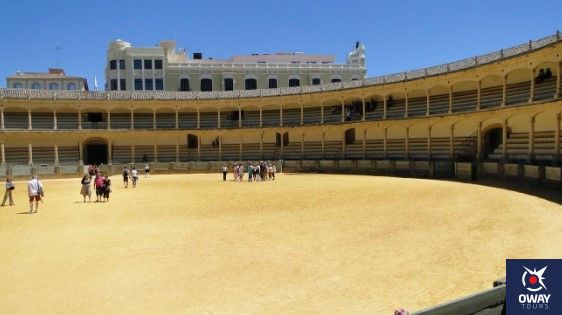 Prices to visit the Bullring of Ronda

The general individual rate is 8 euros, although audio guides can be purchased for an additional 1.5 euros.

Curiosities about the Bullring of Ronda

The bullring is famous because it was one of the first arenas where the transformation of professional bullfighting took place. In the times of Philip V, the practice of chivalric bullfighting by the nobles was dismissed by the bullfighting on foot carried out by commoners, thus becoming a popular spectacle. It was precisely the Plaza de Ronda that created the Ronda school, one of the first theatres to be transformed by the professional bullfighting carried out by a carpenter, Francisco Romero, who invented the muleta and inaugurated a dynasty of bullfighters that reigned for a long time in the squares of Spain.

In tribute to the first centenary of the death of the great painter Goya, it was introduced in this square with a new style that the painter represented in his works. The Goyaesque Bullfighting was introduced by Antonio Ordóñez in 1954, and draws attention to the clothing of bullfighters, as they are dressed according to the eighteenth century and a square decorated for the occasion.

With the second dynasty of Ronda bullfighters in the twentieth century, is an important contribution to the history of bullfighting. Cayetano Ordoñez and his son Antonio Ordoñez managed to captivate the interest, by the way of conceiving the tereo, of illustrious characters such as Orson Wells and Ernest Hemingway, of whom effigies have recently been placed in his memory in the city. 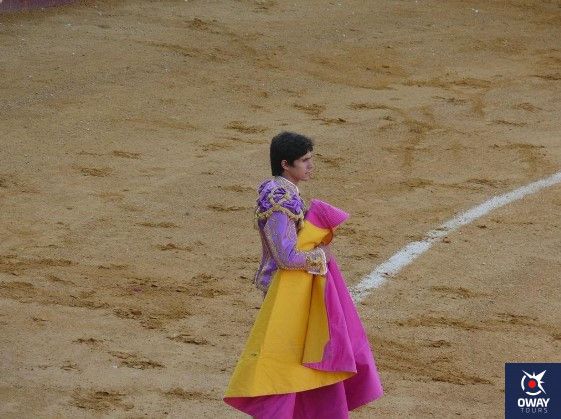