All the information about the New Bridge of Ronda | OWAY Tours

The New Bridge of Ronda

The New Bridge is the most emblematic and beautiful monument of the city of Ronda in Malaga, built between 1751 and 1793. It saves the Tajo of Ronda, a gorge more than 100 metres deep, which was excavated by the river Guadalevín thanks to the course of time. If you want to visit the city of Ronda and enjoy the beauty of this romantic landscape, stay to read this article and learn more about the New Bridge of Ronda before visiting it. 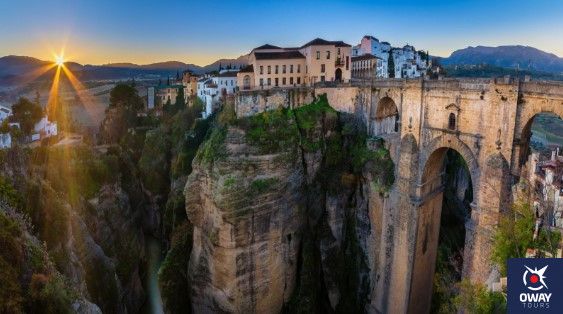 History of the New Bridge of Ronda

The New Bridge of Ronda is a universal symbol of one of the cities with more visitors of all Andalusia, Malaga. It is an engineering jewel that took a lot of effort to build and, in turn, allowed the expansion of the municipality in a natural way, split in two by the Tajo. This construction allowed the population to grow in the direction of the Dehesa del Mercadillo, the current Plaza de España.

The projection of the bridge dates to 1542, but it was not until 1735 when the construction of the first bridge began. A structure of 100 metres in height and 35 metres in diameter was built in a single arch. Nevertheless, the poor execution of the project, the inadequate enclosure of the arch and the lack of supports contributed to the structure collapsing six years after its construction. Fifty people died in the meltdown, and hundreds of tons of stone ended up at the bottom of the ravine. This terrible accident led to the design of the current bridge that we all know today. The construction of a bridge of this magnitude in the first half of the 18th century was a real achievement in the history of bridges, surpassing all the structures of this type that had been built on the planet, except for those made by the ancient Roman Empire.

However, despite this tragic event, we can now enjoy the architectural and monumental jewel that is the Arch of Felipe V. In order to allow circulation, the piece of wall that prevented it was removed and a ramp and the aforementioned Arch were built, trying to improve access to the city, but the steep slope was not the most suitable, especially because of the added difficulty for the passage of carriages.

As the historian Faustino Peralta explains and as confirmed by the documents preserved in the Virtual Library of the Serrania of Ronda thanks to the research of Aurora Melgar, the works of the New Bridge were resumed in the year 1759. In a study carried out by Rosario Camacho and Aurora Miró, entitled “Antecedents of the New Bridge of Ronda”, we can see the different projects that were considered to carry out the construction of the bridge.

The funding meant some problems, having economic contributions from different towns: 15,000 reals from the Real Maestranza and even transactions that were made in the May Fair. José Martín de Aldehuela was responsible for drawing up the plans, and even directed the construction of the main arch and the upper roadway which, from 4 November 1787, opened the bridge to traffic and is currently being walked on by hundreds and hundreds of visitors to the emblematic building site. The bridge was finally opened in May 1793.

It is made of stone masonry, with a central semicircular arch that rests on a smaller one, under which the course of the river runs. At the top we find the rooms of the bridge that served as a prison and, on both sides, there are two other semicircular arches that support the part of the structure that holds the street. 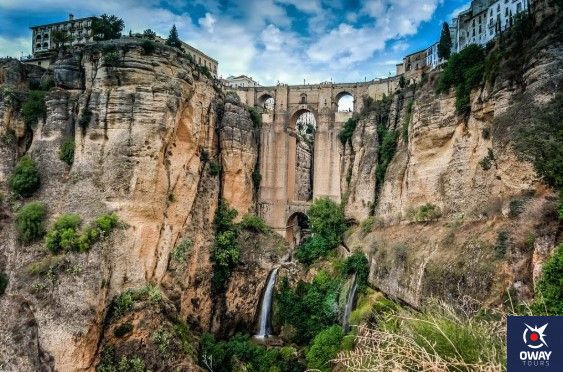 How to get to the New Bridge of Ronda

The situation of Ronda is a bit peculiar, since it is located between the mountains and, for its inhabitants, tourists and visitors, this situation so isolated and surrounded by nature and vegetation is of great beauty. If we go in our own vehicle from Malaga, we will only have to take the A-357 towards Ronda. By bus, Ronda is connected with the main cities in the province, both with Malaga and Marbella, for example. Furthermore, it is also connected with other Andalusian provinces, such as Cadiz and Seville. You can also go by train, especially from Malaga, Antequera, Algeciras and Madrid. 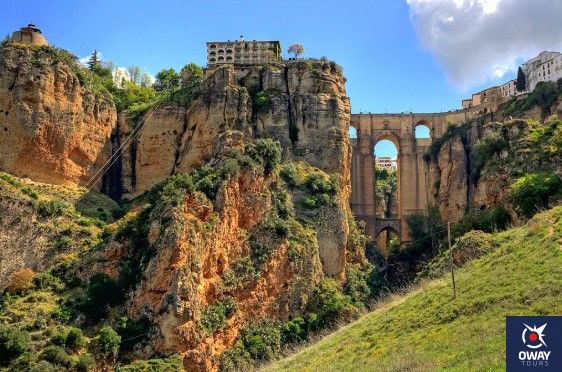 Curiosities about the New Bridge of Ronda

The best views we can see of the New Bridge are located at the end of a small path that runs from the Plaza de María Auxiliadora. The desire to build a bridge to save the cliff that crossed the Tajo has always existed, first by the hand of the Arabs and then by the Christians.

After the Christian conquest in 1485, life in the village developed very quickly, so the large increase in population required the construction of a new bridge. The attempt to build the bridge in the 16th century was a failure, since the technical difficulty it presented was enormous. Finally, its construction between 1759 and 1793, more than three decades, was of great skill and is a masterpiece of engineering. Despite its enormous dimensions, the bridge blends in perfectly with the natural element of the rock, as the colour fades with the walls of the cliff. This is because the material used was that extracted from the bottom of the river gorge after the first collapse.

José Martín de Aldehuela, the enigmatic architect of the bridge, is also credited with the construction of the Ronda bullring, although this is not confirmed. He arrived to Málaga at the request of Bishop Molina Larios to build the foundations of the Cathedral, since the architect had previously worked with great skill in the Cathedral of Cuenca. However, there are many legends that circulate about this bridge and one of them says that Martín de Aldehuela committed suicide on the New Bridge because he will not be able to design a better bridge later. His remains are buried under the plaza of the San Pedro de Alcántara convent in Malaga.

Above the main arch of the New Bridge there is a small window which, as we pointed out earlier, is a hidden room that served as a prison and later became an inn, transforming what was considered a sentence into a privilege. Today it is a centre for the interpretation of the surroundings and the history of the city, where different photographs and videos are shown that tell the story of the New Bridge. Some days, when the wind blows fiercely under the arches of the bridge, strong whistles are produced and the wind raises the water of the river, so it is usually said colloquially that “it rains upwards”. 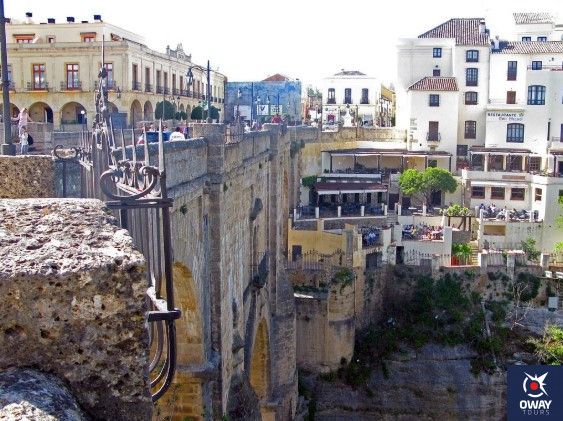