The Pavilions of Expo 92 Seville

Expo 92 in Seville was a universal exhibition held in 1992 in the city of Seville. It lasted 6 months, starting on 20 April and ending on 12 October, a date which coincided with the 5th Centenary of the Discovery of America, and its slogan, related to this event, was “The Age of Discoveries”.

This exhibition also coincided with the 1992 Olympic Games held in Barcelona, so that both events meant a very important cultural and tourist enhancement for our country, which was reflected after the arrival of millions of visitors to the Andalusian city, which was placed on the international map as never before.

If you want to get a more developed experience about the city; from OwayTours we recommend you to visit our blog about Seville; where we have a news blog where you won’t miss anything if you want to go to the Sevillian city.

History of the Expo 92 Seville pavilions

To reflect on the history of this exhibition, we have to go back to 1981, when we find that the delegation from the United States of America had asked to hold a Universal Exposition in Chicago to commemorate the 5th Centenary of the Discovery of America, the place where the World Columbian Exposition had been held several years earlier, in 1983. Spain was to join in presenting this candidacy for the city of Seville a year later.

In the same year, our neighbouring country, France, also announced its intention to hold a Universal Exposition in Paris in 1989, to commemorate the Second Centenary of the French Revolution; this was ruled out because it was not considered possible to hold two Universal Expositions in less than 10 years.

Subsequently, both the Spanish government and the organisers of Chicago sent a joint petition proposing, for the first time in history, that a Universal Exposition be held in two different venues, Seville and Chicago, which was unanimously approved by the OIE General Assembly.

However, in 1985, the Chicago venue announced its withdrawal from the exhibition due to serious organisational problems, leaving Seville as the only venue to represent the event, which meant a task against the clock to ensure that the event was carried out in the best possible way and of the highest quality.

After the end of the event, almost 30 years later, we can see how the Isla de la Cartuja has gone from being the epicentre of the city to being treated as a technology park. With the passing of the years, there are still abandoned pavilions waiting to be put to some use; however, in this part of the city there are still hidden corners of what was once this important event.

If you would like more information about this enclave of the city, OwayTours recommends you to visit our Free Tour of Seville, where we will develop this information in a more extensive way. 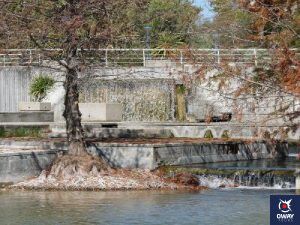 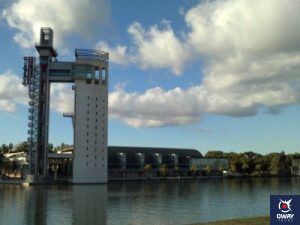 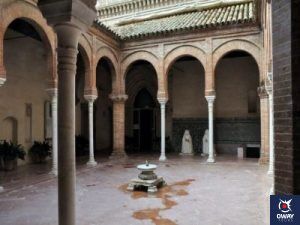 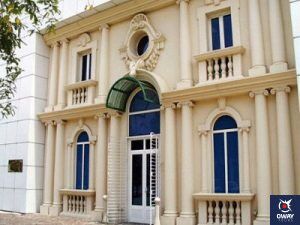 Through the birth of the Expo Legacy Association, the aim is to safeguard the heritage of what was the 1992 Universal Exposition in Seville.

As we have said before, the science and technology park (PCT) Cartuja currently manages a large part of the space occupied by the Expo, however, it still breathes Expo and its emblematic mascot, the bird “Curro”, is still remembered.

Some of the best preserved areas are:

The Pavilions of Spain, Andalusia, France and Finland, in addition to the magnificent Navigation Pavilion; they have been inscribed by the Andalusian Regional Government several years ago in its catalogue of Andalusian Historical Heritage for their intrinsic value.

Other pavilions that are still in full use are those of Italy, Canada, France and Morocco; where we highlight the latter, which has emerged as the headquarters of the Three Cultures Foundation.

However, places such as the Puerta Triana, with its fountains and pavilions were demolished, thus losing emblematic sites of that time such as the Omnimax cinema.

For more information about the important monuments of the city, OwayTours recommends you to visit our tour about the Monumental Seville: Alcazar and Cathedral, where we expose all of them in detail commenting on their history and curiosities.

How to get to the pavilions of Expo 92 Seville

Despite the recovery of emblematic sites, there are still some unresolved issues, including the improvement of transport links to La Cartuja. From the city, you can get to the Isla de la Cartuja, where the Expo 92 pavilions are located:

Bus stations near the Isla de la Cartuja in Seville:

Curiosities about the pavilions of Expo 92 Seville

Other outstanding services if you are in Seville: