All the Information about Magdalene Church | OwayTours.com

The Andalusian capital has a lot of heritage elements of great beauty and uniqueness, among them this Baroque-style building built on a Catholic temple and which is currently a major tourist attraction in the city of Seville. Read on and you’ll learn all the information about the Magdalene Church.

The church or Royal Parish of St. Mary of the Magdalene was destroyed during the French Invasion at the hands of the Napoleonic army in the 19th century. Because of this, in 1840 the project was moved to its current site, San Pablo Street, where a century-old convent called San Pablo el Real was once located.

It was the architect Leonardo de Figueroa who was in charge of rebuilding the Church, and despite the necessary displacement, he carried out a thorough work where he respected the conception of the original building. This is why the current construction maintains an image quite close to that which was once wary by the French. In addition, one of the parts of the original infrastructure, the funeral chapel, was preserved and added, where one of the Seville Easter Brotherhoods, the Brotherhood of Quinta Angustia, is currently gathered.

In 1970 it was declared Of Cultural Interest under the category of Monument.

The Church is open from Monday to Sunday throughout the year and under the following times:

It should be noted that Sunday is a special day, as weekly masses will be held in the church and the visit should be made with greater caution than usual.

During the usual hours the visit is totally free, although there you can provide a donation to help with the rehabilitation and conservation of the construction if you wish. In addition, every Tuesday from 11’30 am to 13:00 in the afternoon (except on the days of religious obligation and the months of July, August and September), free guided tours are held which must be booked in advance. However, if you decide to book one of these visits, the institution itself reserves the right of cancellation in which case any impediment arises due to religious reasons. On weekends and precepts they are reserved exclusively for the liturgy.

You will need to write an email to the visitasmagdalena@gmail.com  to reserve your place.

In the case of wanting to make a private visit outside of opening hours, the cost of this will be 50 euros regardless of the number of people who make up the group. The schedule of these visits will be from 17’30 to 18’30 in the afternoon.

Despite being a medium-sized infrastructure, it has many notable parts both outdoors and indoors.

At first glance we find a cover made of stone, decorated with different symbolic elements: two vases, a shield and a bust of St. Thomas Aquinas. It is complemented by a rose window made of blue ceramic and a crown of flowers. In the highest part of the facade is located a symmetrical balcony in its divisions. 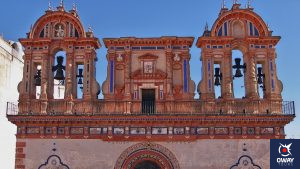 The interior is structured in four naves, one oriented from east to west and three oriented from north to south. The central nave is the widest and is where the choir is placed during religious offices.

The Church has a beautiful dome decorated with images, phrases and paintings of angels that glorify the image of the Virgin Mary and the Catholic religion.

In the vault of the main altar is represented the Triumph of faith,  with Santo Domingo de Guzmán and  Santo Tomás de Aquino surrounded by a court of angels. 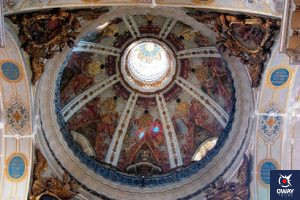 In the part of the epistle we also locate elements of great relevance, such as the Chapel of Christ of Calvary and St. Anthony of Padua, the sculpture of Santa Catalina de Siena and the altarpieces of the Virgin of Carmen and San José with the Child. Unlike the first zone, all these parts are native to the eighteenth century but equally representative. 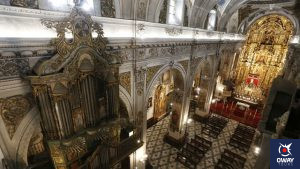 If you choose to go by car or motorbike, there are several car parks where you can park while visiting:

-Parking Plaza Nueva S.L: Located at Calle de Albareda number 18. It is an indoor car park and is also open 24 hours a day.

Curiosities about the Magdalene Church

-Throughout the year the church shelters two important processions: The Christ of Descent and the Virgin of the Fifth. Because of this, from it they start their annual tour during the Easter festivities, in addition to hosting the meeting of the different sororities.

-The church has three alternative entrances, which over time has made the habit of accessing the interior from the door of the main facade lost and it is more common to do so by the other entrances.

-This church did not always have the function of guarding religious worship, because during the time of the invasion of the French to Spain, the building was looted and inside was installed an army barracks.

-Inside we find true relics, such as the ornate dome or the Upper Major, accompanied by an altarpiece of the eighteenth century with a height of almost 200 square meters. The Madgalene Church is one of the constructive jewels of the Andalusian capital.

-Currently the institution is carrying out a project called “Cicerones de la Magdalena”, designed for those art enthusiasts who wish to expand their cultural horizons and in which anyone who wants it can be entered at the email address indicated above.